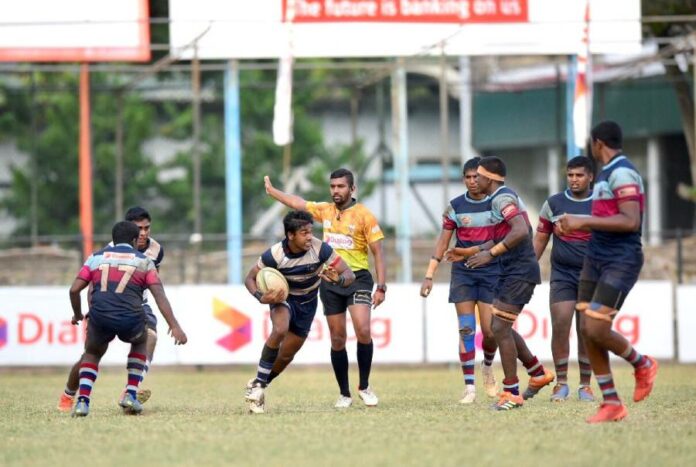 The visitors began proceedings on a sunny evening at Royal Complex as the Antonians looked to go one better against the Josephians at the second time of asking having lost to them in the League.

St. Joseph’s College had Dilhara Subash returning to the run-on XV, after recovering from concussion while Isuru Kanchana found himself on the bench.

It was St. Joseph’s who started off on the front foot, thanks to an early try from the leading try scorer of the League, Naveen Marasinghe. Dilhara Subash made no mistake with the extras. (SJC 07-00 SACK)

The visitors from the hill capital replied instantly with a try of their own from Scrumhalf Perera. The youngster took a quick tap to score. Sahan Keerthisiri added the extras to level things up at the Complex. (SJC 07-00 SACK)

Deshan Tharuka scored as the Josephians Naveen Marasinghe and Player of the Match Vihanga Randeepa linked up with the winger to send him over untouched to regain the lead, even though Subash failed with the extras.

The Josephians took control of the game as St. Anthony’s College were reduced a man as Pilley was set to the bin for repeated infringements. This paved the way for the Josephians, who scored two further tries prior to halftime, to put a comfortable cushion between the two sides.

Sachintha Vaiyantha and Deshan Tharuka were the two try scorers to get their name on the scorecard. Dilhara Subash found his kicking boots following a dismal performance in the final game of the League season, knocking over both conversions before the hooter.

The Josephians displayed intent following the break, scoring a penalty off the boot of Subash on their first entry into the visitors 22-meter in the second half.

Perera doubled his try tally for the Antonians as his solo effort was capped off with a try under the post. Undoubtedly the play of the match, the Scrumhalf, brought about the razzle-dazzle beating man after man to score. Keerthisiri added the extras as the visitors looked to get back into the game. (SJC 29-14 SACK)

The Josephians were reduced to thirteen as two-try scorer Deshan Tharuka and replacement lock forward, Ayesha Lanka were both sin-binned within a matter of minutes.

This did not deter the Josephians as their defense turned up, holding the opponent at bay. This defense, turned into attack as Skipper Teran Karunanayake, pounced on a turnover, finding Randika Dahamjaya to finish off in the corner.

Subash failed with just his second kick at goal, however, the Josephians cruised to a comfortable win to secure their ticket through to book a date with Wesley College.