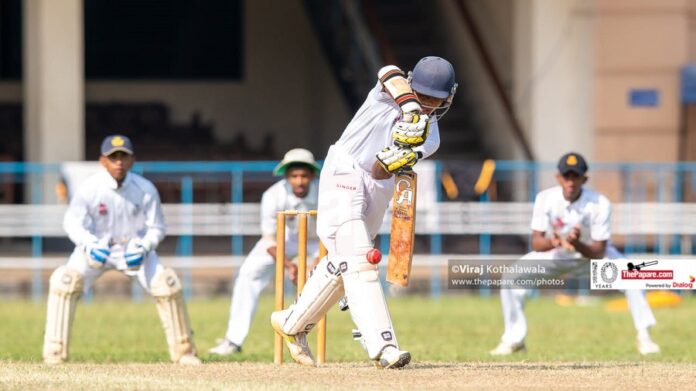 Five games in the Schools U19 Division 1 Cricket Tournament, including both tiers, were played today (30).

Front runners of the last season, St. Joseph’s College took a few bruises in this year’s tournament at the start. But, finally, they have opened their account this year with a win against St. Anne’s College Kurunegala.

Sheran Fonseka was the key to their success, as the Josephian wicketkeeper-batsman struck a rejuvenating 85 runs in style.

Royal College’s Isiwara Dissanayake, who is having a stellar run this season, also scored an impactful half-century today as it helped Royal secure a 54-run victory against De Mazenod College.

Sri Lanka youth star and Richmond College skipper, Amshi de Silva, who is famous for his skills with the ball, shined today with a match-winning half-century to his name at a crucial juncture for Richmond. He remained unbeaten on 65 as he saw them go past the line with 3 wickets intact.

In bowling, it was the Royal speedster, Kavindu Pathirathne, who grabbed the limelight. Pathirathne never fails to impress whenever he turns up for Royal College. He kept that fine form going with a tidy spell of 3 for 19 today.

Lohan Aroshana of Dharmasoka College, Ambalangoda stole the show today in Tier B. He first dismantled the opposing St. Sylvester’s batsman with figures of 5 for 23. And then returned with the bat to smack and unbeaten 40 runs to seal the deal for his school.