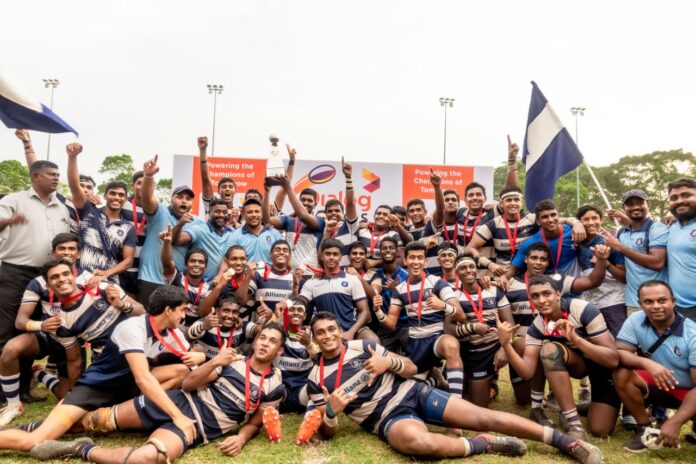 St. Joseph’s College managed to sneak past Royal College on the league table as the Saints defeated Wesley 26 (4T 3C) – 11 (1T 2P), in the final game of the League worked off at the Havelock Park.

Both teams came with a raft of changes as St. Joseph’s chased their best ever league finish, with Wesley looking to upset.

It was the visitors who drew first blood through the boot of Jayawardena: however, the Josephian forwards found their rhythm, settling in after 20 minutes to find Jehan Athukorala crashing over in typical fashion. Dilhara Subash made no mistake with the extras. (SJC 07-03 WC)

Jayawardena stuck his second of the evening, and a try moments later by Akeesh Jayamanna ensured the visitors took a four-point lead into lemons.

The home team stepped out with intent in the 2nd half, scoring three times, securing the bonus point and managing to sneak past Royal College on the Dialog Schools Rugby League table.

The forwards ground out a win for them, thanks to second half tries from Hooker Chamodh Seneviratne, Highest Try Scorer Naveen Marasinghe and NDB Player of the Match Sachinthana Waidyanatha.

The tries at regular intervals killed off any resistance by the visitors as Dilhara Subash did not forget his kicking boot on the final day of the League to secure a victory.