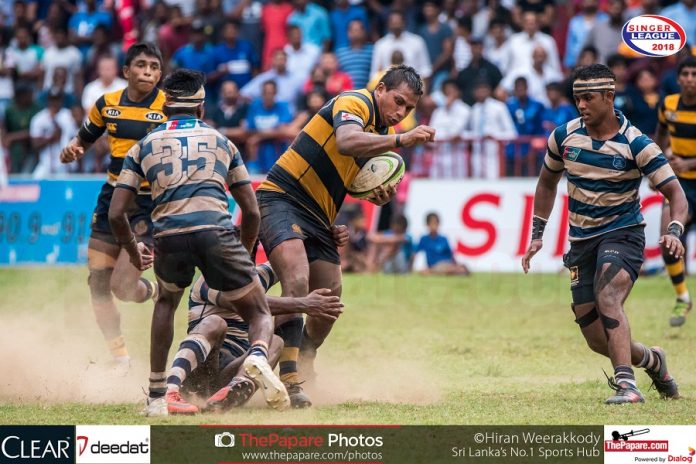 Both teams made some changes to their respective set-ups with Santhush Algama missing out on the starting XV as Tharindu Maduranga made his debut for St. Joseph’s College while Royal made three changes in the forward pack as Janidu Dilshan and Yasas Rashmika moved back to their usual Centre and Wing positions.

The Josephians got off to a blistering start at the Park thanks to Tharindu Maduranga as the Winger scored off his first touch for the Joes after a trademark Dulanjana Piyathissa break.

Captain Sameesha Virangana added the extras, making it a perfect 7 with just two minutes on the clock. (SJC 07-00 RC)

Mid-field defensive woes continued for the Blue and Whites and Royal pierced through the heart of the Josephian defense soon after, however, some scrambling defense at the back kept the Royalists at bay.

Royal College spurned an early chance as Janidu Dilshan failed to find touch, however, a cardinal error by the Josephian skipper saw his 22-meter restart charged down.

Moments later the Royalists took a circumspect approach as they decided to go for the points rather than touch. The decision paid dividends as Dulan Gunawardena pierced the posts, getting Royal off the mark. (SJC 07-03 RC)

The brave Josephian defense was finally breached as the visitors scored their first try of the game, moments later through Himantha Hirushan.

In expected fashion, the Royalists made the home forwards work but the Josephians were caught out as Hirushan dived in from close range. Gunawardena slotted home, adding the extras as they took the lead for the first time in the game. (SJC 07-10 RC)

The home side was starved of possession but looked potent with the little bit of ball they had, however, neither team was able to make further inroads as the first forty ended.

Royal College flew out of the blocks at the beginning of the second half, stunning the Josephians and were rewarded with an early score.

Flanker Ifham Fareed was the beneficiary to cross the whitewash for the visitors in similar fashion to their first.

Following some valiant buildup play, the flanker was at the right place at the right time to pick and crash over. Gunawardena failed to add the extras, as the timely score for the visitors took the wind out of the Josephian sails. (SJC 07-15 RC)

The hosts’ back line tried in courageous fashion to penetrate the opposition defense to no avail even though momentum shifted ever so slightly in favor of the Josephians.

Skipper Sameesha Virangana pierced the uprights twice, making use of the momentum change, as the lead was cut down to two points with the game heading into its final quarter. (SJC 13-15 RC)

The lads from Maradana could not seem to get a hold of proceedings with errors mounting against them as valuable possession went begging.

The final five minutes saw the Royalists tightening the screws, as the Josephian defense held firm even though they conceded penalty after penalty.

The visitors were drained from their efforts, opting for three points off the boot of Gunawardena, even though the Josephians remained a converted try away. (SJC 13-18 RC)

Three minutes remained on the clock as Sameesha Virangana made a hash out of the restart as chances of a comeback turned ever so slim for the home side.

A scrum off the restart which did not travel 10 meters was retrieved by halfback Rashane Gunawardena, however, another meaningless grubber handed possession over as Royal held out during the final seconds to secure yet another win over the Blue and Whites.