St. Joseph’s College and Gateway College marched into the final unbeaten and it was the lads from Maradana that got the better of the opposition to take home the championship-winning the game 1-0 in what was a thrilling encounter of football.

Shenal Sandesh of St. Joseph’s College who had a fantastic tournament throughout was adjudged the Most Valuable Player of the Tournament while, Kavindya Rupasinghe who sealed the Championship for St. Josephs, scoring the solitary goal was awarded the Man of the Match of the final. Further, Gateway shot-stopper Dwayne de Mel was adjudged the Best Goalkeeper of the Tournament.

Zahira College then defeated St. Thomas’ College 4-3 on penalties after the game ended with neither team scoring a goal, had to satisfy themselves placing 3rd place in the tournament.

Both teams topped their respective groups winning all their group stage fixtures. Joes booked their place in the all-important finals after defeating De Mazenod College, Kandana and St. Thomas’ College, Mt. Lavinia, both by 2-1 in the quarter-finals and semi-finals respectively while Gateway, in their journey to the finals, overcame St. Benedict’s College by 3-0 in the quarter finals and Zahira College, Colombo by 3-1 on penalties in the semi-finals as the scores were tied at the final whistle.

Maris Stella College, Negombo eased past St. Benedict’s College by 3-0 in the finals to be crowned the Plate Champions of the tournament.

Losers of the Cup Championship quarter final round were moved to the Plate Championship category where Maris Stella defeated De Mazenod by 2-1 and St. Benedict’s College defeated St. Henry’s College, Jaffna by 3-2 to book their place in the final.

Wesley College, Colombo managed to seize the Bowl Championship after defeating Royal College, Colombo in the finals by 2-0 on penalties as the scores were tied at the final whistle with both teams sharing a piece.

Teams that were placed 3rd in each group at the end of the group stages played in the Bowl Championship semi-finals in which Wesley defeated Al Aqsa National School Kinniya by 2-1 and Royal defeated Alethea International School 1-0 to qualify for the finals.

The teams that were in the bottom of each group at the conclusion of the group stages had a shot at silverware in the Shield Championship where Isipathana emerged victorious against Zahira College, Gampola by 1-0 while Hindu College sealed a 2-1 victory against D.S. Senanayake College to book their place in the finals.

Results leading up to each final 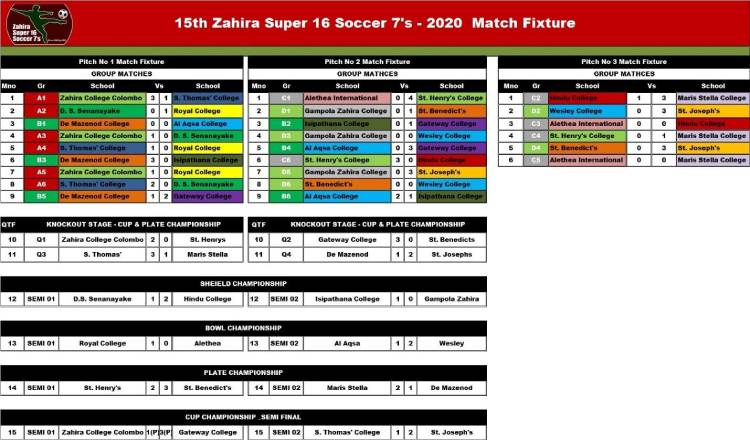