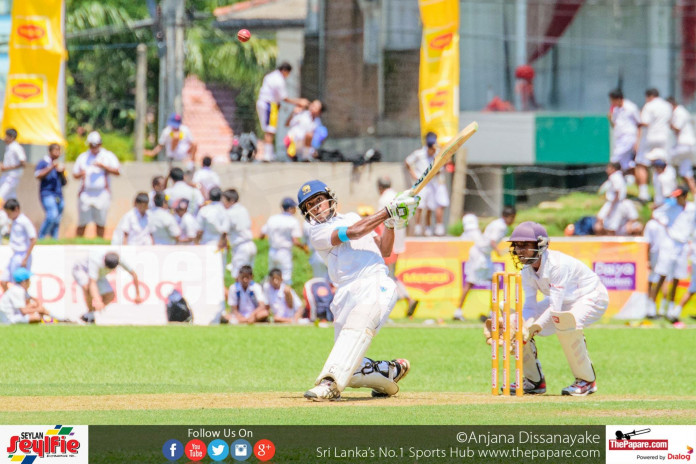 Randeera Ranasinghe’s 98 guided St Anne’s to 307 in their first innings after they were asked to bat first by their rivals Maliyadewa College in the 34th Battle of the Rocks at Welagedara grounds.

Maliyadewa had their backs to the wall at stumps on day 1 after they lost two wickets for 48 in their first innings. They are still trailing by 259 runs with 8 wickets in hand and they will have a stiff task ahead of them on day 2.

Early on after been asked to bat first, St Anne’s started off in a disastrous fashion with opening batsman Vimukthi Bandara retiring hurt in the 7th over. Maliyadewa made early inroads as they took 2 quick wickets for just 37. St Anne’s consolidated through Pubudu Ganegama and Randeera Ranasinghe who added 41 runs for the 3rd wicket with Ganegama scoring 34 runs.

After the dismissal of Ganegama, Randeera took control of the innings and soldiered on. Vimukthi who retired hurt returned to the crease after the 3rd wicket and made 27 runs but the match defining innings came from Randeera who scored a brilliant 98 off 116 balls. He deserved a century but he was unfortunately run out just 2 runs short.

After the dismissal of Randeera, St Anne’s was put in a tight spot at 199 for 6. Tharinda Wijesinghe and Kavindu Ranasinghe got together and turned the game on its head through a 108 runs stand for the 7th wicket, both scored 56 runs each.

After the dismissal of Kavindu, St Anne’s declared their innings at 307 for 7 in 73.5 overs. For Maliyadewa, skipper Damitha Silva and Kaveen Bandara shared 2 wickets each.