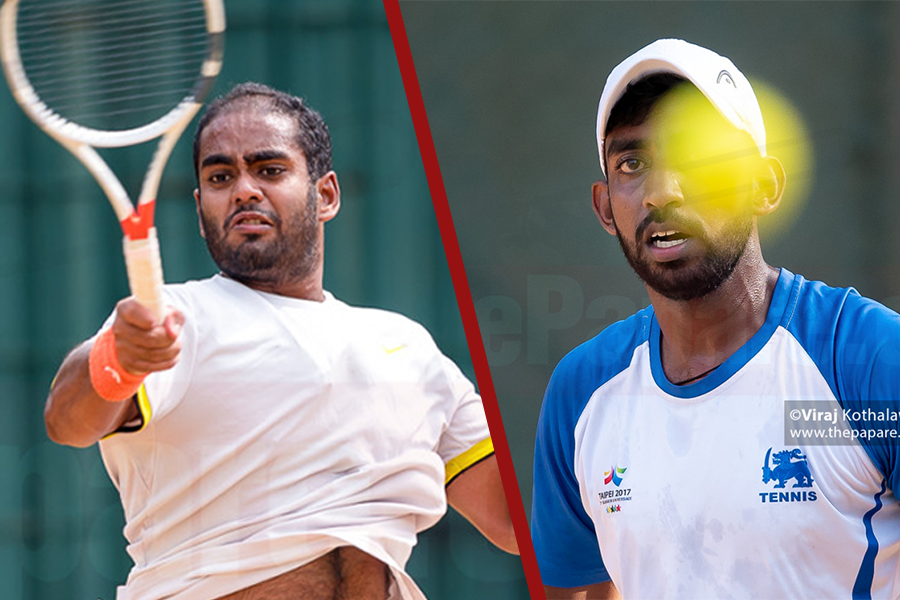 National champ, Sharmal Dissanayake showed no mercy to fellow National teammate Yasitha De Silva in the final of the SSC Open Men’s final, as he walked away with the first Super ‘A’ grade title of the year.

Last year’s champion, Dineshkanthan Thangarajah, opting to sit out of this year’s tournament, enjoyed a 1-year reign as champion down at Maitland Cresent as his understudies took over SSC, this time around.

It was a national battle for the ultimate title of the Men’s Singles Open at SSC, as two frontrunners of the National Davis Cup team took center stage at the SSC courts. Sharmal Dissanayake and Yasitha De Silva, ranked 3rd and 4th in the draw, made brisk work of their initial round matches to mark their spots in the final.

Sharmal Dissanayake – Road to the Final

Starting his way from the bottom half of the draw, Sharmal received a Bye in the first round of the 64-man draw. He defeated Anuth Wijesinghe, 6/0, 6/1 in Round 2. Dissanayake made quick work of A. Lokuge and Heera Ashiq in the next two rounds as well, 6/1, 6/0 and 6/4,6/1 respectively.

A surprise entry to the semifinals, unseeded Suren Balachandran stood with little to no chance on breaking down the reigning National champ as he faced a defeat of 6/0, 6/1 sending Dissanayake straight to the final.

Seeded right behind Dissanayake, Yasitha De Silva competed in the top half of the draw and also started his run with a Bye. De Silva met Junior Davis Cup represent Nelaka Dissanayake in Round 3, whom he easily dismissed in straight sets 6/4, 6/0.

9th seed Luca Knese made an incredible comeback from a three-set battle against Chathurya Nilaweera in the previous round to reach the semifinal against De Silva. Unfortunately for the youngster, experience trumped hope, as De Silva conquered the match in another straight set (6/2, 6/1) victory.

Tournament top seed Sankha Atukorale faced an abysmal exit at the hands of De Silva in the Semifinal round. Final scores read 6/3 6/3, with an even break of serve in each set, sending Yasitha into the final.

The final battle was anticipated to be an epic showcase of skill between two of the greatest up and coming tennis stars of the country. But what followed that evening was a surprise to all present at the SSC premises.

Dissanayake was a force from the start, he made few unforced errors and worked off quick points with specific strategies to compel Yasitha into giving away far too many points than he would have liked.

The sets finished off with Dissanayake winning 12 untouched games to Yasitha’s 0, proving once and for all, his dominance in the National Tennis circuit.