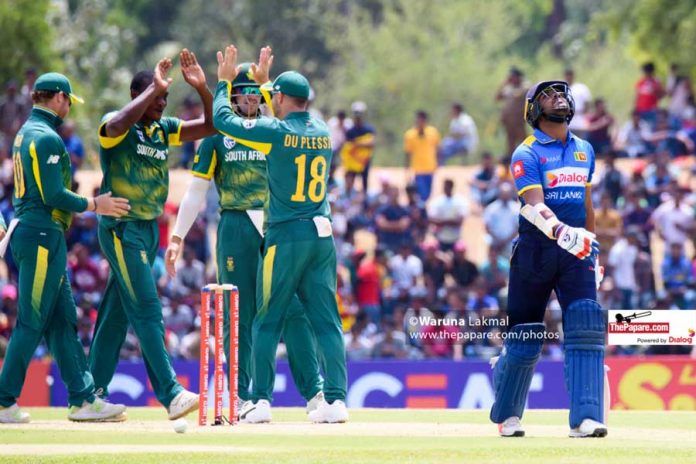 Saturday 1st June 2019, approximately 10 months and a few days away from today Sri Lanka play their first World Cup match against New Zealand in Cardiff. If you’re the cricket fanatic I am, you probably are aware by now that the WC is in England and all teams will be playing each other at least once; ICCs latest strategy of making the round robin phase more interesting.

So, what are the problems SL needs to solve in the upcoming 10 months?

Basically everything. Thanks to the turmoil we went through post 2015 World Cup (the only good ODI memory I have is beating India in the ICC Champions Trophy), we must admit that we are like a wrecked ship that needs complete re-engineering while teams like India are just worrying about their misfiring middle order. Pfftt..

Team India and VK, I am talking to you. Just listen to the list of problems we have. We don’t know who we’ll be opening with. We don’t know who will make up our middle order. We don’t know for sure who that number 7 all-rounder will be, nor do we know the makeup of our bowling attack. To heck with it, we don’t even know who will captain us! If you guys are a 5-star hotel that needs some painting in its basement, well then we are a god knows which star hotel that hasn’t even obtained building approval after having collected full payment from its buyers. But as all teams do, and must indeed do, what we have is hope. A ray of hope with Mr. Hathurusinghe taking charge, at least winning our last ODI series (yes it may have Bangladesh and Zimbabwe) was an indication of something in the right direction.

The number of openers we’ve had since the 2015 World Cup, I think we can make a separate XI of them. Honestly what are the realistic options we have? Given his previous World Cup experience, Upul Tharanga might seem like the most obvious choice but his poor track record against the moving ball is a problem. The good sign is that Team England today is a batting heavy unit, so the pitches in England are likely to be batting friendly too. Looking beyond UT, we of course have Kusal Mendis, who did a more than decent job at it, albeit it was against Bangladesh and Zimbabwe in the sub-continent. Danushka Gunathilake may be up for it if he sorts his stardom crisis and clubbing habits. Kusal Perera is not out of contention as yet, and it is the same with Niroshan Dickwella too. Another option could be Shehan Jayasuriya who has performed well in the Provincial 50 over tournament with both bat and ball. I really do hope this guy gets a decent look in before he is dropped off the radar. He could provide us with a part-time bowling option too. (with all the wicket-keeper batsmen walking into the team, that is an area of concern in case one of the bowlers have an off-day). And I may be just talking after Dimuth’s superlative series against SA, but he too may be worth a look in to at some point of time before the WC.

I doubt we’re anywhere close to deciding on who the openers will be. I would dare use the words ‘Openers Conundrum’, but I might have to use that word too many times in this write up. A soup of conundrums is what we are in right now.

Whilst most teams have their best batsman at number 3, we are still in the quest of finding the next Kumar Sangakkara post 2015. Yeah, yeah, it’s been 4 years since he retired, and yet we talk about him. That unfortunately is the sorry state of affairs that we are facing. I think SL’s number three, can be narrowed down to 2 options. Kusal Mendis or Dinesh Chandimal. With little doubt these are two of the best resources that we have, and despite the argument that Chandimal may be too slow for ODI cricket I dare say he should always be part of the setup given the options that we have. Chandimal at any position less that 4 is not good enough, and if he is to make the team then it must be at 3 or 4.

The misfiring… no no.. scratch that. The far from finalized middle order

So is it 4,5,6 or 4,5,6 and 7. I think with Mathews as a bowling option being as unpredictable as it gets, and the number of wicket keeper batsmen we have, Sri Lanka unfortunately just cannot make the 7-4 combination work. If we are to have at least a decent makeup, then it just cannot be anything less than 5 bowlers, possibly one of them being a bowling all-rounder but not more than that. So within that 4,5, and 6. Mathews will walk-in as long as his legs can withstand not just the pressure of performing, but also the arm chair critics that try to bring him down every time he plays. The rest of the options would have one spot reserved for the wicket-keeper whoever it might be, (Kusal Perera or Niroshan Dikwella) although in fairness both of them may make it to the team based on their batting alone. Looking at the other tried and tested options, that man Asela Gunarathne does deserve another decent go (I know he’s been overlooked for the SA series), perhaps Dhananjaya De Silva may get a look in as well.

But keep this in mind. If Kusal Mendis doesn’t open and he is our number 3. Then 4,5 would be Chandimal and Mathews. So number 6 could only be the wicket-keeper whoever we pick, Dikka being the front runner perhaps. The second openers slot thus becomes an important one. It is a position that will decide the balance of the team. If Kusal Mendis, KP or Dikka opens, it frees up the number 6 slot for someone else deserving. So, is there a middle order batsman better than both Dikwella and KP?

Or perhaps to throw another option into the hat… Kusal Mendis or Chandimal could don the gloves; this would free up both an openers’ slot for someone like Danushka Gunathilake/Shehan Jayasuriya (both can also turn their arm over if need be) and another genuine middle order batsman. That however is unlikely to happen with both Mendis and Chandimal being the more stable batters in the team. Having said that though, Sanga being the best batter in the team did it in the ODI setup for more than a decade, so if this option helps the balance of the team then of course it should be given a go.

Seam bowler friendly pitches, hard hitting all-rounder. Look no further than the man Panda himself. He had a decent Tri Series in Bangladesh, and somehow seemed to have re-invented himself for the better (both batting and bowling-wise) under the guidance of Hathuru. He did show glimpses of the Panda of old, in the Tri Series as well as the Nidahas Trophy. Both tournaments were in the subcontinent though, so reading into performances too much don’t really help, but yet again having said that it’s not like we have much to look for either. Of the options we’ve witnessed in the recent past, at least the only option that comes close would be Dasun Shanaka. I hope the SA series and the future tours in England and New Zealand give both of them a decent go. TP is far ahead, but for the sake of competition I sincerely do hope Dasun Shanaka makes a fist of it. Here are two things that I’d like to request though. Please, let the all-rounder slot not go below number 7 (we need 4 genuine bowlers instead of half-baked ones). The all-rounder has to be a seam bowling option given the conditions in England (thus sadly no place for the likes of Sachith Pathirana, or Seekkuge Prasanna unless they can make it to the team on their bowling, which I don’t see happening).

A big fan of having 4 genuine bowlers. If they can bat then yes, it is a bonus, but the bowlers should be picked based on their primary skill which is to bowl tight and take wickets, and not on their ability to wave their bat around in the last few overs or hold one end up and make a slow 50 when the batters fail. So, what should be the make-up of the attack? With the conditions, I’d say 3 seamers and 1 spinner. Hathuru has seemingly narrowed down his spinning options to Lakshan Sandakan and Akila Dananjaya. On current form, Akila Dananjaya stands out, but yet again for the sake of competition I do hope Sandakan gives a good fight. A left arm wrist spinner in good form could certainly do no harm to the make-up of the squad. The three seamers… Well Suranga Lakmal makes it as a senior statesman and as someone who could make good use of the conditions in England. He might have to finish his quota before the death though as he is not known to be all that good at the death (he did bowl well though against the West Indies in that Tri-Series that featured India as well). The remaining 2 slots well could be a toss between many. You’ve got Shehan Madushanka, Lahiru Kumara, Kasun Rajitha, Nuwan Pradeep and not forgetting our old lankan lion, that great man himself Lasith Malinga. In my honest opinion, Lasith does deserve another decent run in the team before being dropped off. Failing which the other fast bowlers better learn how to bowl at the death because we will need someone to partner TP at the death. Another option worth a look into could also be Isuru Udana. He can bowl first change, bowl at the death, and wield his bat a little as well.

Now we all know that we wouldn’t be asking this question if Mathews was fit and healthy. But the fact of the matter is that he is not. So, who should be captain. By the looks of it Chandimal would be an obvious and more than useful choice as back-up. But I’m just thinking Chandimal as permanent ODI captain wouldn’t do too much harm either. Only the SA series will tell.

Having a designated captain and then finding a way to not make him play might work wonders as well. After all, look at some of our recent series wins. Bangladesh Tri Series (Angi was captain, but Chandimal had to captain in his absence), SA Test series (Suranga Lakmal captained in the absence of Chandimal), and who could ever forget WorldT20 2014 (Malinga captained, with Chandimal out of form).

This write-up probably points out the obvious. But clearly Hathuru has a lot on his plate for the next 10 months, and without a doubt he knew what he was getting in to before signing up for it. Off to you man, expectations are not high this time. Getting to the semi-finals will be a big bonus, but what we hope for is some really good competitive cricket that would make people think twice before they say ‘Off Season’.