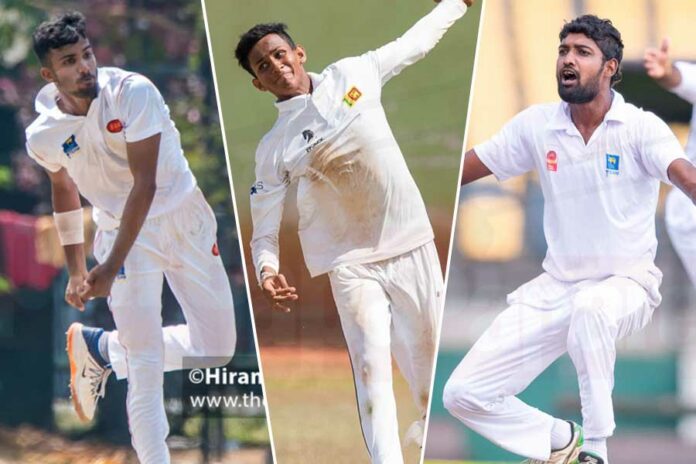 Spin resources in our backyard are so thin that a left-arm spinner with just a handful First Class appearances has been called up to the Test squad.

Praveen Jayawickrama is in Kandy by default, as the team’s leading left-arm orthodox spinner Lasith Embuldeniya is injured and so is Duvindu Tillekeratne, the next in line. That should have earned Prabath Jayasuriya a break for the two Test series but he failed a fitness test – the skin fold test.

Jayasuriya has been really impressive in the domestic circuit in recent years and he had been identified as the replacement for Rangana Herath. But the selectors took a bold decision by throwing Embuldeniya into the deep end ahead of him. Now the opportunity has come back knocking again, but he failed to grab it. But he is such a class act, and you tend to get the feeling that his time will come. Jayasuriya has a good head on his shoulders, an essential requirement for a spinner in Test cricket.

By the looks of it, Sri Lanka will go for the lone spinner strategy bringing Wanindu Hasaranga back to the fold and getting Dhananjaya de Silva to do the backup bowling. Or if they are really bold, they might go for an all-pace attack using Dhananjaya as the lead spinner. This is a dangerous ploy. But this is what they would tend to do looking from a distance.

It could be termed as a defensive strategy.  Sri Lanka obviously know that spin is Bangladesh’s strength.  That is exactly why Sri Lanka Cricket decided to play the series at Pallekele and not in Galle, a venue that passed the ‘bio-bubble test’ with flying colours. Galle favours spin and Sri Lanka didn’t want to take the bait given their batters struggles against the likes of Dom Bess and Jack Leach in January.

It makes sense to change your strategy to pace especially with Mustafizur Rahman on IPL duty. But Sri Lanka should not get carried away with their pace strategy as they have had bitter experiences in the past.

The three-match series against Pakistan in 2015 was closely contested and the teams ended up at Pallekele with the series leveled at 1-1.  Sri Lanka made a blunder for the series decider opting for three lead fast bowlers in Dhammika Prasad, Nuwan Pradeep and Suranga Lakmal. This was at a time when Angelo Mathews was sharing the new ball. In this particular Test, he sent down 17 overs. The man they left out was none other than Rangana Herath. It was a huge gamble and one that the team regretted.

After being set a target of 377 in five sessions, Pakistan cruised to victory with a session to spare with Younis Khan coming up with a dazzling performance. His unbeaten 171 was one of the finest knocks played on Sri Lankan soil. In that game, the bowling looked one dimensional and the expertise of Herath was dearly missed.

Bangladesh may not have the class of the likes of Younis and Misbah-ul-Haq now that Shakib-al-Hasan has also remained in India for the IPL. But with players such as Tamim Iqbal, Mominul Haque and Mushfiqur Rahim in their ranks, they have several match winners.

Strategically, it was a sensible decision to move away from Galle to Pallekele but over reliance on pace should be resisted.

Coming back to the point of spin reserves being thin, you are left with the question whether any leniency should be shown towards Dilruwan Perera.

The veteran off-spinner is struggling to finish the two-kilometer run in the stipulated time. With SLC’s zero tolerance towards those who are failing minimum fitness standards, Dilruwan is not going to make a comeback but you always wonder that if someone can take wickets in a Test match, as Dilruwan has done time and again, should you be giving him the long rope?

Fitness and fielding are areas that Dilruwan has been neglecting for some time now. Some of his dropped catches have cost the team dearly. How often have you seen Dilruwan celebrating a wicket only to come back to square one after the third umpire calls a no-ball? A spinner bowling no balls – all too frequently – is intolerable.

All in all, it’s good to see some emphasis being placed on vital aspects like fielding and fitness. Head Coach Mickey Arthur has been insisting on these for a while now and it seems that he has put his foot down to bring the best out of his players. Currently, the players are supposed to finish the two-kilometer run in eight minutes and 30 seconds. The indications are that it could be further reduced to eight minutes and ten seconds to keep the players on their toes.