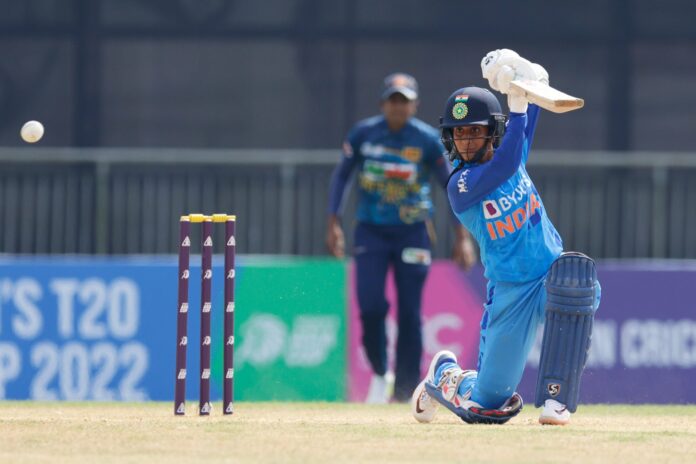 Sri Lanka Skipper Chamari Athapaththu won the toss and opted to field first in their first game of the tournament.

Sri Lanka got off to a strong start with the ball dismissing in-form Indian opening batter Mandhana and Verma within the first 4 overs. However, Indian No. 3 batter Rodrigues and Skipper Kaur rescued the innings, adding 92-run partnership for the 3rd wicket.

Sri Lanka managed to fight back with the ball in the latter part of the innings as they restricted the strong Indian batting lineup to 150. Rodrigues was the top-scorer for India as she made 76 runs off 53 balls with 11 fours and a six. The off-spinner Ranasinghe was the pick of the bowlers for Sri Lanka as she grabbed 3 scalps for 32 runs.

Sri Lanka started well in the run-chase as the opening pair Athapaththu and Madavi added 25 runs in 3.3 overs. However, Sri Lanka was unable to sustain the momentum going forward as they lost 4 quick wickets putting the team behind the rate at the half-way stage of the innings.

Harshitha Madavi tried her best to put the team over the line with a fighting knock of 30 runs off 32 balls, but the Indian bowlers continued to tighten the screws with the ball as they finished off it professionally, clinching an easy victory at the end.

Sri Lanka Women will face United Arab Emirates Women in their 2nd game of the tournament tomorrow (02nd October) at the same venue.