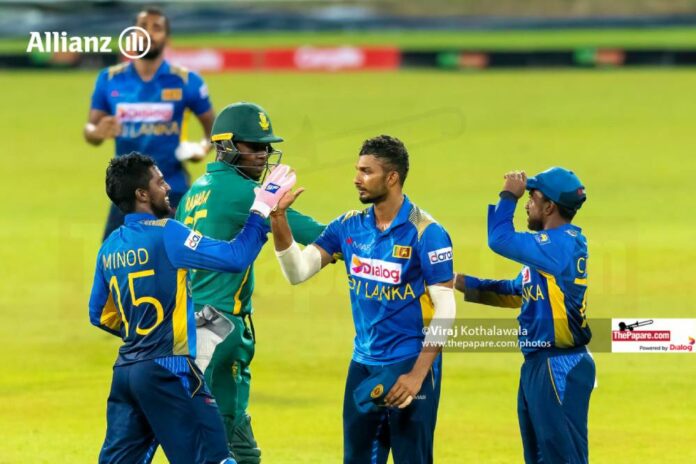 For a team that revolutionized the way white ball cricket was played, it was extremely painful to watch the national cricket team suffering back to back 5-0 defeats or 3-0 routings in the shorter formats of the game.

In 2017 alone, Sri Lanka were whitewashed 5-0 three times; by India, Pakistan and  South Africa. Things are on the mend and victory over a formidable South African attack gives us hope that the future is exciting indeed for the Sri Lankans.

If Dasun Shanaka’s side wins on Saturday that will be the first time in seven years that the national cricket team beat a side that was ranked in the top five. Since winning an ODI series in England in 2014, Sri Lanka have lost 21 bilateral series and won only six of them. These wins are mostly against lower ranked teams like Bangladesh, West Indies, Scotland and Zimbabwe.  They have lost at times to Zimbabwe and Bangladesh as well.

Shanaka’s  leadership has been pretty impressive since he took over from Kusal Perera. Here’s  someone that had been groomed for the job and you could see that he has got it in him with the way he moves about things. He is more  proactive on the field, sets the standards on the field, consults his team mates during crunch situations and he is not afraid to take a  few risks. You need a  fearless approach when under the pump and Shanaka has it.

However, Dasun is not the finished article yet. It took him three hours and 58 minutes to finish the quota of 50 overs. He has been already fined and docked points for a previous offence since taking over. Had the previous playing conditions existed, he would have been banned for Saturday’s game. But thankfully, the playing conditions have changed and the captain is no more suspended.

What was more worrying was that Sri Lanka’s  spinners sent down 38 of those overs and it was ridiculous that they could not finish on time.

On Thursday, Dasun had also used up as many as six bowlers by the 18th over and that made you think that he was running out of ideas faster. But these are early days for Dasun and he will learn.

Head Coach Mickey Arthur must be commended for his no nonsense approach when it comes  to fitness. Avishka Fernando was so close to making his Test debut in January when England were in town as the team was down with so many injuries. But Arthur insisted that Avishka be sent home from Galle after he failed a fitness test and put his foot down and said that the opening batsman needed to get his act together before being reconsidered.

Avishka  has bounced back stronger. His hundred on Thursday was a stunning display. Some of the shots that he played like the flick off Kagiso Rabada for six  reminded you of the good old days of P.A. de Silva. He is going to win you lot of games moving forward. Moments after the hundred there was confirmation from big boss Tom Moody who tweeted that Avishka  is an all format player, which means Test debut is around the corner when the West Indies come home in November.

Charith Asalanka has been an excellent find. He plays the spin bowlers so well and that has been something lacking in the past few years. The stand between Avishka and Asalanka was the turning point of the game as they added 97 runs in 71 balls. Not just their ability to find the gap and hit boundaries, but the way they ran between the wickets was excellent to see.

There were some good catching no doubt but fielding is one area where Sri Lanka can make further improvements; particularly young ones like Asalanka.

There are areas of improvement  no doubt. Dasun is an excellent leader but his credentials in the 50 over format doesn’t warrant him a place in the side. He needs to do more with both bat and ball to have more authority in the side. There’s no harm in picking someone who is not sure of his place in the side as your leader though. That maybe not the norm, but in our backyard  we are short of genuine leaders.

Dasun batting at number six is too much to ask of him. So is Wanidu Hasaranga at number seven. They should both drop down one slot bringing in a batsman at six.

The selectors were bold to kick out Lakshan Sandakan. It must have taken them lot of courage because Sandakan is one of our senior most players having debuted in 2016. The team has invested on him a lot too but the facts are stubborn. After all these years, Sandakan is still struggling with his length and he needs to spend lot of time with Piyal Wijetunga doing spot bowling.

On the other hand, it was surprising not to see Ashen Bandara in the squad. Well, it is true that his batting is not the finish product but having him in the squad certainly helps because once he comes onto the field as substitute, there is lot of energy and he could produce that match winning direct hit or turn a half chance into a terrific catch.