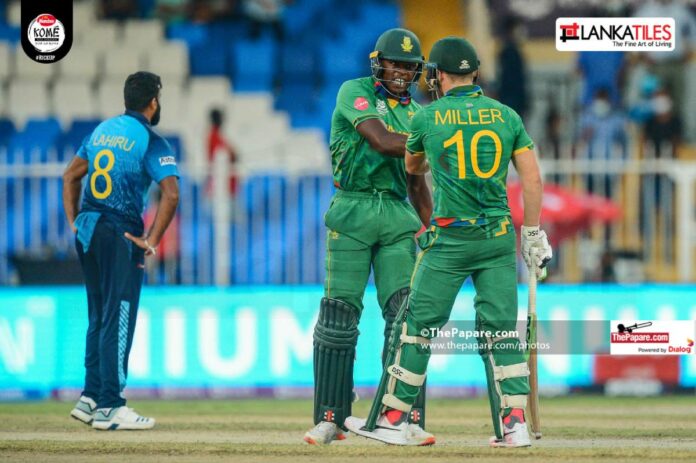 With 15 runs required off the last over, Miller stroked two massive sixes off Lahiru Kumara to win the game for Proteas with a ball to spare. Miller was ably supported by Kagiso Rabada, who made 13 runs off 7 balls.

Dushmantha Chameera, the Sri Lankan spearhead rocked the South African chase inside 3 balls in the fourth over. First, it was Reeza Hendricks who was trapped plumb in front, secondly, De Kock skied one straight up as the bowler completed the catch to make it 26 for 2.

Sri Lanka attempted a couple of times to run-out Rassie Van Der Dussen and Temba Bavuma. In the process, gave away a couple of overthrows but Dasun Shanaka aimed at one stump and found Van Der Dussen short of his crease in the 8th over after Bavuma called for a run and sold him mid-way on the pitch.

From 49 for 3, Aiden Markram joined skipper Bavuma to rebuild the Proteas innings. They added 47 runs from 42 deliveries for the 4th wicket but Wanindu Hasaranga castled Markram for 19 to bring the equation to 47 runs in the last 5 overs.

With Bavuma trying to come out of his shell as South Africa required 31 runs off the last 18 balls. Hasaranga dismissed well-set Bavuma when Pathum Nissanka plucked a superb catch out of thin air and followed it up with Pretorius holing out to deep long-on as the Sri Lankan leg-spinner picked up his first T20I hat-trick.

Chameera delivered the 19th over, giving away only 10 runs leaving 15 runs to defend for Kumara. But, David Miller’s six-hitting prowess stole the limelight off Nissanka’s efforts with the bat and Hasaranga’s hat-trick.

Left-arm chinaman Tabraiz Shamsi and seamer Dwaine Pretorius picked 3 wickets apiece as the rest of the batters failed to support Nissanka as the Proteas put on a clinical effort in the field to bowl out the islanders after opting to chase at the toss.

Sri Lanka’s batting approach against a part-time spinner, Aiden Markram was questionable as he bowled two quiet overs for 8 runs inside the powerplay. Senior batter Kusal Perera played a poor stroke, across the stumps against a 144kmph bolter from Anrich Nortje and got his middle stump uprooted as Sri Lanka were 1 down for 20 runs.

Charith Asalanka, the man in form capitalized the last over in the powerplay with a couple of boundaries of Anrich Nortje as Sri Lanka made only 39 in the first six overs.

With the front-line spinners coming and trying to strangle the Lankan scoring rate, Asalanka and Nissanka smashed a six apiece off Keshav Maharaj in the 9th over. Just when Sri Lanka looked like in some sort of rhythm in their innings, Asalanka was run-out courtesy an accurate throw from Kagiso Rabada to end the 41-run second-wicket stand. Asalanka paused for a second before coming back for the second run which was enough for De Kock to whip off the bails.

Bhanuka Rajapaksa came in at number four to keep the left-right combination going but the No.1 T20I bowler in ICC Rankings, Shamsi ripped through the Lankan middle order. Rajapaksa, followed by Avishka Fernando, both gave simple caught and bowled chances to Shamsi for 0 and 3 respectively.

Wanindu Hasaranga holed out to deep long-on as Shamsi completed his quota of overs for 17 runs and took 3 wickets. Sri Lanka were 5 down for 91 and Nissanka soon felt the pressure of not getting enough support. Dasun Shanaka and Chamika Karunaratne failed to find the boundary rope regularly in their short innings’, but the diminutive Nissanka stood out, smashing 17 runs off Rabada in the 18th over to give something for the bowlers. He struck 6 fours and 3 sixes before perishing in the penultimate over.

Earlier, Sri Lanka made no changes to their lineup from the Australia game in Dubai on Thursday. Wicket-keeper batter Quinton De Kock returned to the Proteas lineup after sitting out the Windies game due to the kneeling mandate. He later issued an emotional statement apologizing for any hurt he may have brought due to his actions. De Kock replaced Heinrich Klassen from the lineup.

Sri Lanka will take on England on the 1st of November (Monday) at the same venue.