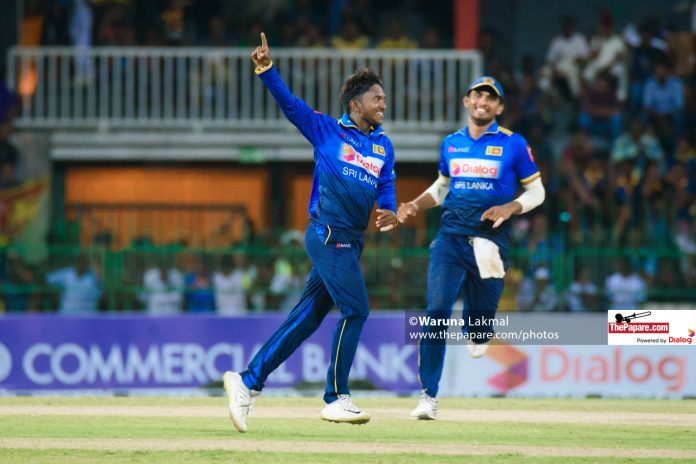 Akila Dananjaya picked up 6/29 as Sri Lanka closed out the 5th ODI against South Africa by 178 runs. Earlier in the day, Angelo Mathews made a brilliant 97 to help Sri Lanka to 299/8 in their allotted overs.

Chasing 300 on what was a characteristically dry surface at the R Premadasa was never going to be easy for the Proteas and their troubles were compounded by the fact that they just could not read Akila Dananjaya’s variations. The visitors looked as clueless as they had done against the Lankan spinners in the Tests as Dananjaya used his leg spin and googly to good effect, registering the best figures for a Sri Lankan against South Africa.

It was that man Suranga Lakmal however who started the South African rut, bowling perhaps the ball of the series. His outswinger to Hashim Amla in the 1st over of South Africa’s chase angled in just enough to have the batsman looking to play on the leg-side before it pitched and moved away to hit the off stump.

Dananjaya, who opened the bowling alongside Lakmal then broke the back of the South African chase, dismissing Aiden Markram and Reeza Hendricks off consecutive deliveries. Markram had looked promising in the middle, smashing 5 boundaries but looked at sea against Dananjaya and eventually drove one back to him, to be out caught and bowled. Henricks was bowled through the gate with the very next delivery.

South Africa never really recovered from that point, losing wickets at regular intervals as Sri Lanka looked sharp (at most times) on the field.

JP Duminy and De Kock hung around for a bit but the chase was always going to be a tall order for the visitors, after having lost nearly half the team for less than 40 runs. Stand in skipper De Kock made a consolation half century while wickets continued to fall on the other end and was eventually undone by a peach of a delivery from Dananjaya for 54.

Dhananjaya De Silva and Lahiru Kumara also looked good with the ball, picking up 3 wickets between them.

Earlier in the day, Mathews won the toss for the 4th time in the series and had no hesitation in batting first.

Niroshan Dickwella and Upul Tharanga got the hosts off to a good start for the 2nd consecutive game, a rarity of late, but Tharanga fell just before the 1st Powerplay was done, nicking behind to Quinton De Kock.

It was to be the story of Sri Lanka’s innings, with many of the batsmen getting starts and not pushing on to big scores.

Kusal Perera came and went but Kusal Mendis managed a decent stay in the middle, putting on 50 runs with Dickwella, before the latter was caught behind trying to cut a delivery too close to his body.

Dickwella looked to be aggressive right from the word go but was unable to get his timing right on most occasions, managing 43 off 65 deliveries.

Dickwella’s dismissal saw Mathews walk in to bat and the Sri Lankan skipper seemed to roll back the years to when he was in his prime, cutting, pulling and driving the Protea bowlers to all parts of the ground.

Dhananjaya De Silva provided good assistance at the other end, as did Dasun Shanaka as Mathews closed in on an elusive ODI century.

Shanaka signaled his intentions, pulling Phehlukwayo for two boundaries either side of Keshav Maharaj at square leg and then heaving Kagiso Rabada over the boundary line for 6 in the next over as Sri Lanka looked to up the ante. He fell in the 50th over for 21 off 15 deliveries and Mathews was just not able to get the boundary he needed to go to his 3rd ODI century as the Lankan skipper finished on 97.