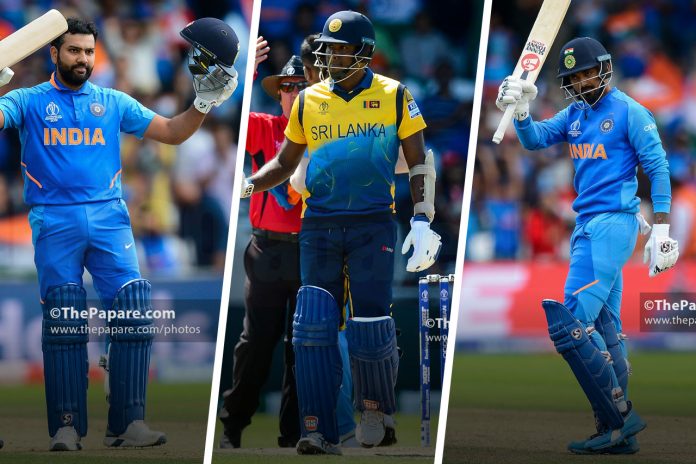 Angelo Mathews’s century was overshadowed by an exceptional display of batsmanship by India, led by Rohit Sharma and KL Rahul as Sri Lanka lost their last group stage match in the ICC World Cup 2019 at Headingley, Leeds by 7 wickets after putting 264 on the board.

Sri Lanka skipper Dimuth Karunaratne decided to bat first after winning the toss as both teams made a few changes to their winning combinations from the previous match. Sri Lanka replaced Jeffrey Vandersay who had a disappointing showing at Chester-Le-Street with Thisara Perera while India added Ravindra Jadeja and Kuldeep Yadav in place of ‘rested’ Mohammad Shami and Yuzvendra Chahal.

Karunaratne and his partner Kusal Perera failed to reproduce another prolific opening partnership for Sri Lanka as the skipper edged a wide one to MS Dhoni behind the stumps, after a brilliant spell of bowling by Jasprit Bumrah.

Perera, just like his previous innings, failed to covert his rapid start to a meaningful knock. He finished as the highest run scorer for Sri Lanka in the tournament.

The find of the tournament for Sri Lanka, Avishka Fernando showed his class by taking Bumrah for two consecutive boundaries after he was reprieved by a DRS call. But he was undone by a brilliant slow bouncer by all-rounder Hardik Pandya.

After another Kusal Mendis failure and struggling on 55-4, Angelo Mathews and Lahiru Thirimanne joined to rebuild the Sri Lankan innings as the pair took the occasional risk and found the odd boundary while knocking around singles to keep the scoreboard ticking.

Thirimanne again showed his value in the middle order, contributing with a busy half century with four boundaries. Mathews and he manufactured the highest partnership (124 runs) for any wicket by a Sri Lankan pair in this World Cup taking Sri Lanka past 200.

Angelo Mathews played one of the best ODI innings he has ever constructed, making a wonderful century, reminding the whole world of the ‘Old Mathews’, laboring and slowly building in the initial stage and exploding at the death. Mathews targeted the Indian bowlers very well, attacking against the likes of Bhuvaneshwar Kumar and Kuldeep Yadav while respecting Bumrah with a solid defense.

#INDvSL | A wonderful knock comes to an end! Angelo Mathews departs in the penultimate over of the Sri Lankan innings.

Sri Lanka compiled a commendable 264 for 7 wickets at the end of 50 overs thanks to another handy contribution from Dhananjaya de Silva.  Sri Lanka played England at this very ground earlier in the tournament and won and were hoping for a similar performance from their bowlers this time too, but it wasn’t to be.

With the ball in hand, Bumrah shone above the rest of the pack with figures of 3 for 37 after his 10 overs.

Indian openers Rohit Sharma and KL Rahul started all guns blazing in the chase, and they didn’t spare even the great Malinga with their brutal stroke play.  Sharma with 4 centuries to his name already in the tournament, reminded Sri Lankans about those double centuries that he scored against them, with another elegant yet ferocious innings.

He and Rahul cut, pulled, lofted, edged and drove the Sri Lankans all the way back to the nearest Airport with a stunning 189 run partnership to knock Sri Lanka out of the contest in a considerable chase of 264 without showing any respect to the bowlers.

Sharma broke the record for the most centuries in a World Cup, stamping his 5th one, a record which was previously held by none-other than Kumar Sangakkara (4 centuries in 2015).

Rahul too reached his maiden World Cup century in 109 balls as he and Sharma became the 2nd pair of openers to score centuries in the same World Cup match. Before them, the rare feat was achieved by TM Dilshan and Upul Tharanga in 2011 twice, against England and Zimbabwe.

One last piece of magic from Malinga

The Sri Lankan bowling looked clueless once Lasith Malinga was unable to produce any magic as the legendary seamer couldn’t penetrate through the Indian defense (or attack). But the warrior made sure he didn’t go wicketless his last World Cup game by picking up the centurion Rahul for 111.

Malinga drew the curtain on his fabulous World Cup career as the 3rd highest wicket taker in World Cups with 56 wickets behind the great Glenn McGrath and Muttiah Muralitharan.

India reached the target comfortably, inside 44 overs to worsen Sri Lanka’s World Cup stay. Sri Lanka signed off from the ICC World Cup 2019 with 3 wins, 4 losses and 2 NRs as the 6th placed nation in the 10-team tournament.

India will be playing their semifinal against New Zealand or England depending on the result of the last league game between South Africa and Australia.