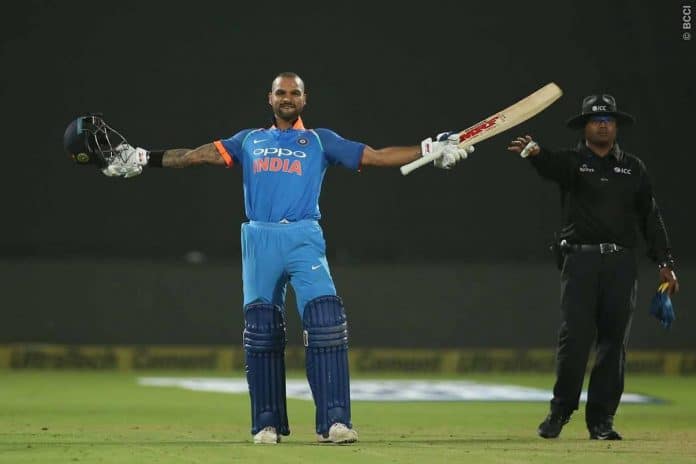 India clinched the three-match ODI series, 2-1 beating Sri Lanka convincingly by 8 wickets in the third and final game played in Vizag on Sunday.

After the Indian wrist-spin duo, Yuzvendra Chahal and Kuldeep Yadav bundled out Sri Lanka for 215, the hosts chased down the target without any hiccups on the back of a Shikhar Dhawan century with more than 17 overs to spare.

Earlier, after the visitors were put in to bat, opening batsman Upul Tharanga hit an 82-ball 95 to build a solid platform as they were 160 for 2 in 27 overs, but the Indian spinners struck back to dismiss the islanders in 44.5 overs.

In reply, Dhawan reached his 12th ODI ton in just 84 balls as the Lankan bowlers were no match for the in-form Indian top order.

Earlier, Rohit Sharma put Sri Lanka in after winning the toss on a pitch that looked tailor-made for batsmen. Sri Lanka were 15 for 1 when Danushka Gunathilaka was caught at mid-on while trying to hit Jasprit Bumrah over the infield.

Tharanga and Sadeera Samarawickrama added 121 runs for the 2nd wicket but the latter was dismissed by leg-spinner Chahal, caught at deep extra cover.

Tharanga, kept up the pressure with an attacking innings with 12 fours and 3 sixes as he passed 1,000 runs in 2017 but chinaman Yadav halted Sri Lanka’s surge in the 28th over with a twin strike, denying Tharanga a hundred, courtesy a smart, sharp stumping by MS Dhoni and dismissing Niroshan Dickwella who gave an easy catch to the only slip.

After that, the lower-middle order was exposed as the Indian spinners struck regularly to peg the visitors back. In-form Angelo Mathews, was bowled for 17 off 28 off Chahal as Sri Lanka were reduced to 189 for 5.

Asela Gunaratne tried to hold the innings together, but wickets fell at the other end. Chahal rapped Thisara Perera, the captain, in front for his third wicket of the match.

Chasing a modest 216 runs to win, the hosts lost Rohit Sharma early when the visitors brought their trump card, mystery spinner Akila Dananjaya early and the Indian captain was castled by a terrific googly in the 4th over.

Dhawan and Iyer constructed a 135-run stand for the 2nd wicket before a reckless shot by the latter off Thisara Perera in the 23rd over. Iyer maintained a strike-rate above 100 to register his second back to back half-century in the series.

Dinesh Karthik joined Dhawan and they were ruthless as well against the toothless Lankan bowlers hammering all around the ground.

Dhawan brought up his hundred off a sweep against Gunaratne while Karthik did the final honours lifting Dananjaya over the cover fielder to a boundary in the first ball of the 33rd over.

Despite winning the first game in Dharamshala, Sri Lanka end a disastrous 2017 in ODI Cricket with only 5 wins in 28 matches under 5 captains.

“Really disappointing for us. We played well in the first game, and it is a good chance to beat India in India, but our bowlers didn’t execute the plans well in the last couple of games. We got good start today, but the middle order didn’t capitalize and so we couldn’t put enough runs on the board.” Sri Lanka captain Thisara Perera said at the post-match presentation ceremony. 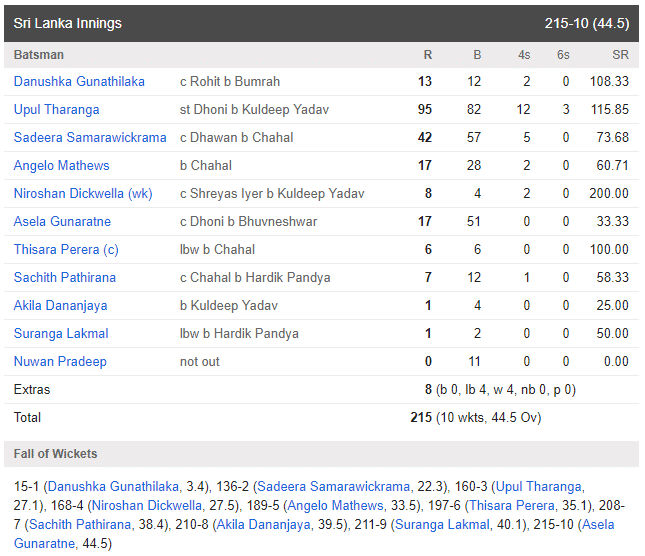 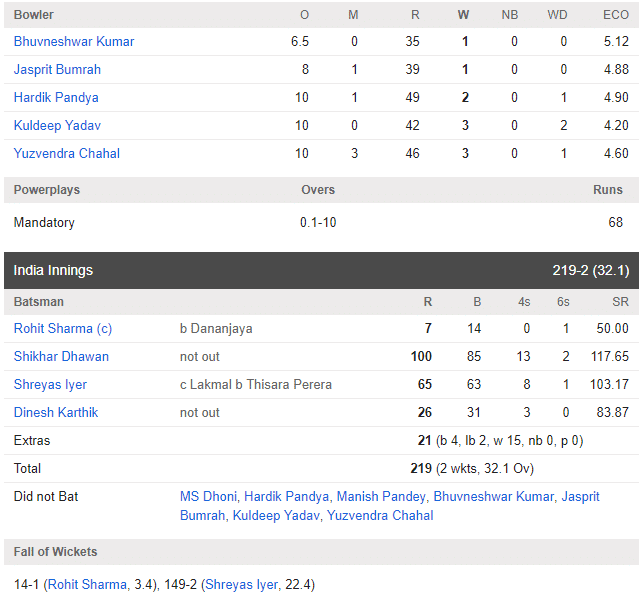 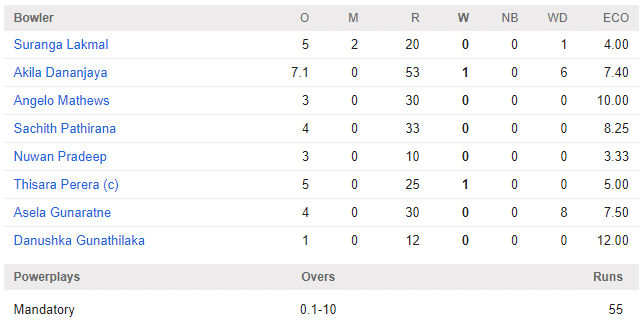