Fast-bowler Suranga Lakmal took three wickets for no runs as Sri Lanka rattled India on a rain-hit opening day in the first Test match at Eden Gardens in Kolkata.

Lakmal bowled six overs without conceding a run claiming the wickets of KL Rahul, Shikhar Dhawan and Virat Kohli as India were 17 for 3 in 11.5 overs as the umpires stopped the match for bad light.

Rahul was undone with the first ball of the match, edging a rising delivery to wicket-keeper Niroshan Dickwella before the crowd had even settled.

Lakmal then took Shikhar Dhawan for eight, after the left-hander dragged a moving delivery on his stumps. Pujara, who was regularly beaten by the moving ball, and Kohli tried to establish themselves before bad light forced the umpires to call an early tea.

The break did India no good as Lakmal returned to trap Kohli LBW for an 11-ball zero. Kohli, in a desperate bid to avoid a rare duck in his glowing career, reviewed the dismissal but replays suggested the ball would have clipped his leg stump.

By not making the batsmen play enough, Lahiru Gamage was not able to keep up the intensity from the other end though he was unlucky not to have got Pujara with one that nipped back in his sixth over. Soon Pujara, who played 43 of the 71 balls bowled in the day, and Rahane complained of low visibility against the seamers and the umpires halted play for the day.

Read More : Our chances against India are slim – Muralitharan

Sri Lanka could not have asked for a better start to a tour that was supposed to be the most daunting one of the year for the islanders as they search their first Test win in India.

Should the rain hold and it remains this overcast, Chandimal’s idea of exploiting the moisture in the wicket could hit pay dirt on Friday. Earlier, Chandimal’s decision of bowling at the toss was only the first instance in 30 years in Kolkata. 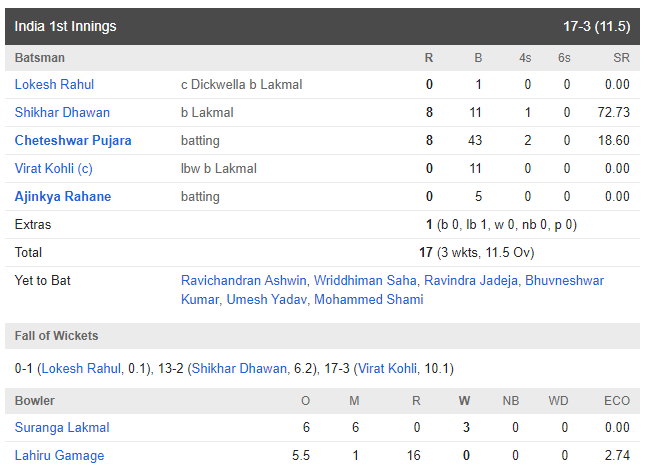