Seam-bowling allrounder Dasun Shanaka picked up two wickets for Sri Lanka as India slid further to 74 for 5 before second day’s play in the first Test was called-off due to rain on Friday at Eden Gardens, Kolkata.

Cheteshwar Pujara stood firm against the Sri Lankan pace attack scoring a gritty 47 off 102 balls with 9 boundaries and wicketkeeper-batsman Wriddhiman Saha, on 6, were at the crease when rain interrupted play and umpires called for early lunch as only 21 overs were possible on day two.

Earlier in the first session, Pujara’s overnight partner Ajinkya Rahane became Shanaka’s first victim after being caught behind for four after a tentative 21-ball stay at the crease.

Shanaka, playing just his second Test since his debut against England at Leeds last year, also dismissed Ravichandran Ashwin who sliced straight to cover point as the hosts lost half of their side for just 50 runs.

Meanwhile, Sri Lanka’s first day bowling hero Suranga Lakmal conceded his first runs in this innings after 46 balls, the most by any bowler since 2001, previous was 40 balls by Jerome Taylor of West Indies against Australia in 2015. Lakmal claimed three Indian wickets, in the 11.5 overs that were possible on a weather-hit opening day of the three-match series. 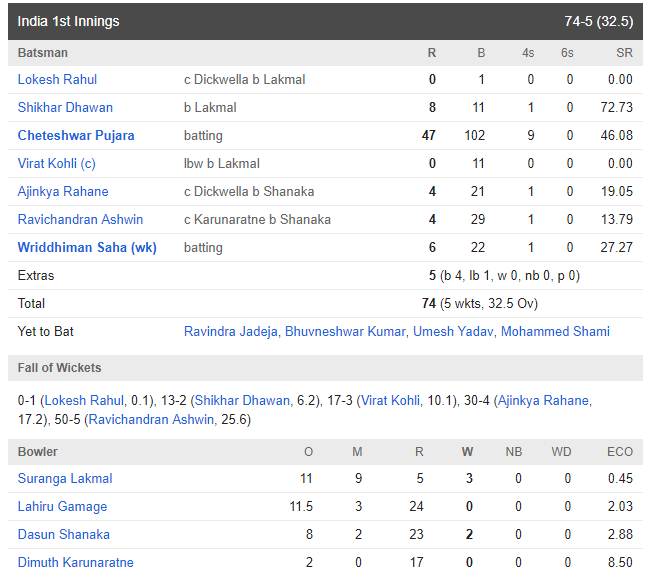