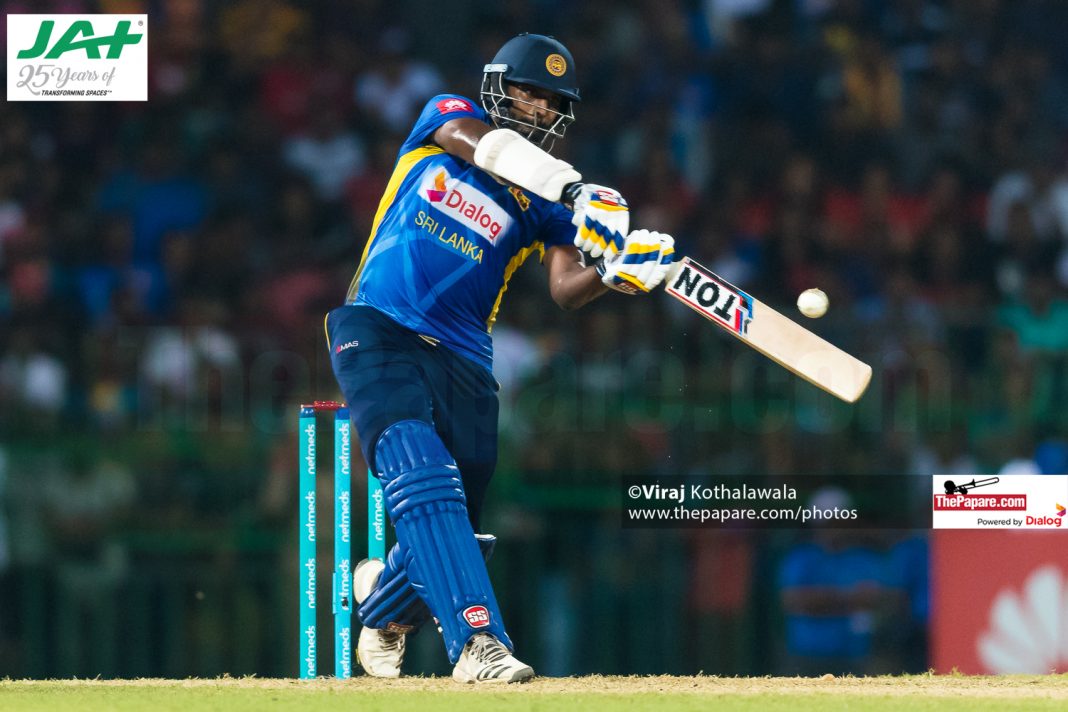 Sri Lanka skipper Thisara Perera made a swift 57 in the T20I against England at the R Premadasa International Cricket Stadium in a 30-run loss for the hosts.

The left-hander continued his stellar form in 2018, coming in to bat with Sri Lanka struggling to get going on 77/4 in just over 10 overs. His innings included 6 sixes and just 1 four as he raced to his 3rd T20I fifty in just 28 deliveries.

ThePapare.com | Viraj Kothalawala | 27/10/2018 Editing and re-using images without permission of ThePapare.com will be considered an intended copyright…….

Perera came in at the fall of debutant Kamindu Mendis, who made a promising start to his international cricket with a quick-fire 24 off 14 deliveries that oozed confidence. The left-handed batsman who had made the headlines prior to the game because of his ability to bowl both right-arm off spin and left-arm orthodox spin, showed that he was no mug with the bat, hitting 3 boundaries and 1 six during his short stay at the crease.

Sri Lanka had begun their chase in shaky fashion as Kusal Mendis was bowled in the 1st over by Joe Denly. Niroshan Dickwella survived a close call in the 2nd over, with his flick falling just short of the fielder at square leg but did not last long, falling to Denly in the next over. Dinesh Chandimal continued from where he left off in the 5th ODI but fell playing a reverse sweep for 26 off Adil Rashid.

Denly, playing his 1st international since February 2010, bowled with good control and came back to wrap up Sri Lanka’s tale, finishing with figures of 4/19 in his 4 overs. Adil Rashid, who had had a decent, if not spectacular, run in the ODIs prior to this game, spun his web around the Sri Lankans, claiming 3/11 in his 4 overs to effectively end Sri Lanka’s hopes of a win.

Earlier in the day, Sri Lanka won the toss and sent England into bat, perhaps expecting rain to once again play a part in the match.

Jason Roy rode his luck in the middle to make 69 off 36 deliveries, helping England to a formidable 187 in their allotted overs.

Lakshan Sandakan eventually accounted for Roy, after the batsman was given 2 reprieves off his bowling in the 11th over as substitute fielder Sadeera Samarawickrama and Dasun Shanaka put down relatively simple chances in the deep.

By then, however, the damage was done, and England were sitting pretty 107/4 in 11 overs. The stage was set for England’s middle order and Moeen Ali and Denly delivered, making 27 and 20 respectively.

Lasith Malinga and Isuru Udana ensured that England did not run away with things however, picking up 3/22 in the last 3 overs as England finished with 187.