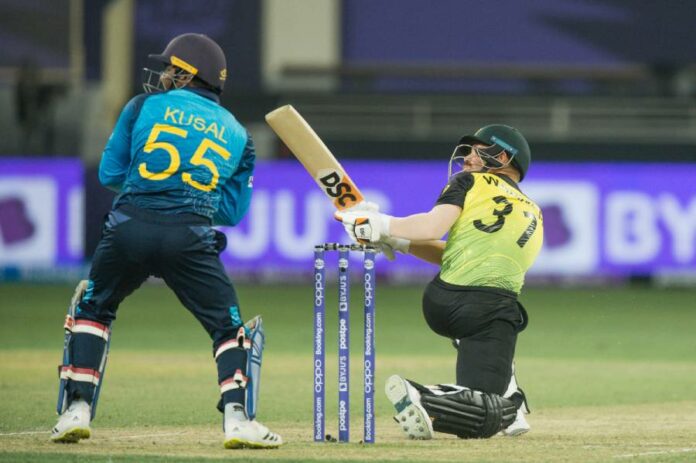 Sri Lanka suffered their first defeat in the Super 12 of the ICC Men’s T20 World Cup 2021 losing by 7 wickets at the hands of Australia on Thursday at Dubai International Stadium.

After being asked to bat first, Sri Lanka posted 154 for 6 from their allotted 20 overs. David Warner’s 42-ball 65 helped Australia reach the target with 18 balls to spare. However, it was Adam Zampa’s four-over spell for 12 runs with 2 wickets with the ball that made the difference.

Chasing 155 runs to win, Australia got off to a flying start courtesy skipper Aaron Finch and David Warner. Finch smothered the Lankan bowlers all over the park during his 23-ball 37. The Lankan seamers were easily put away by the Aussie openers as they scored 63 runs unscathed in the powerplay – the highest in the current tournament.

Wanindu Hasaranga was introduced into the attack and he struck immediately as Finch chopped one onto the stumps to end the 70-run opening stand. Hasaranga then got the better of dangerous Glenn Maxwell for 5 to make it 80 for 2.

Sri Lanka had a golden opportunity to dismiss Warner, who was dropped by Kusal Perera off Dushmantha Chameera whe he was on 18. He pounced on the opportunity to reach his 19th T20I half-ton in just 31 balls. He struck 10 fours before departing off Dasun Shanaka’s bowling but by that time, the damage was done. Steve Smith and Marcus Stoinis finished off the chase comfortably.

While batting, despite a strong start by Kusal Perera and Charith Asalanka, the Lankan middle order crumbled in the 9-16 over period as they accumulated only 36 runs in that 7-over period for the loss of 4 wickets. They managed to resurrect the innings towards the end through Bhanuka Rajapaksa, who made a useful 33 in 26 balls.

Australia struck early in the 3rd over with Pathum Nissanka mistiming a lofted drive off Pat Cummins as the opening stand accumulated only 15 runs.

Asalanka started his whirlwind innings with a short-arm jab to the square-leg boundary off a Cummins bouncer. He took on Maxwell in the very next over, with a 86-meter six over the deep mid-wicket region as Sri Lanka gained momentum in their innings.

Asalanka and Perera managed to take Sri Lanka to 53 at the end of the powerplay. Whilst Australia spread the field and brought their ace spinner Zampa into the game, Sri Lanka started losing wickets and momentum.

Zampa dismissed Asalanka, who swept straight to deep square leg as his 27-ball 35 ended in the 10th over. Asalanka and Perera added 63 runs for the 2nd wicket to lay a solid platform for the islanders.

Perera smashed Mitchell Starc over the long-on boundary for a 82-meter six, but the bowler won the battle when he rattled the stumps with a searing yorker in the next ball. Perera scored 35 off 25 balls.

Zampa removed Avishka Fernando for 4 as the Lankan batter top-edged a slog sweep straight up. Wanindu Hasaranga was caught behind for 4 runs in just 2 balls off Starc as Sri Lanka were 5 down for 94 after being in a comfortable position at 78 for 1.

Sri Lanka’s late resurrection was helped by Marcus Stoinis’ 17th over with Rajapaksa collecting 17 crucial runs with 2 fours and 1 six. Skipper Shanaka found it difficult to score at a healthy pace as he managed to get only 12 runs off 19 balls.

Sri Lanka’s next game will be against South Africa in an afternoon game on 30th October (Saturday) at Sharjah Cricket Stadium.