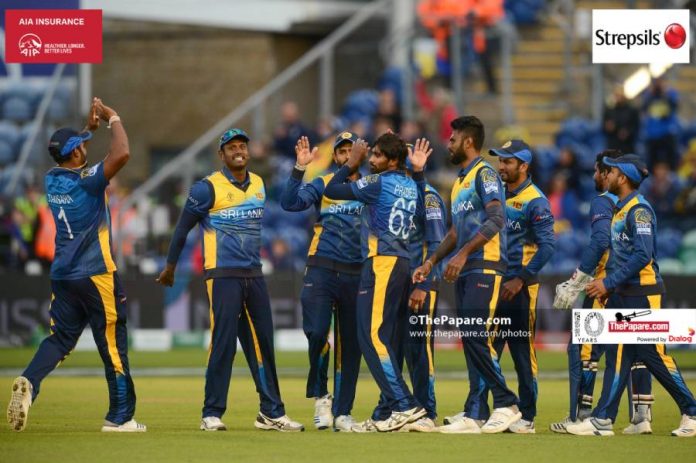 The Sri Lanka and Afghanistan encounter at Sophia Gardens in Cardiff had it all. Brilliant stroke play, excellent bowling, horror batting displays, stunning catches, plenty of rain, dropped catches and even three misfields off a single ball.


At the end of it all, former world champions Sri Lanka scrambled past a spirited Afghanistan outfit who were playing division 5 cricket 10 years ago.

Sri Lanka were in cruise control at 144/1 in 21 overs after being asked to bat in their 2nd World Cup game against Afghanistan, only before a dramatic collapse saw them lose their last 9 wickets for just 57 runs.

Sri Lanka made one change to their line up bringing in Nuwan Pradeep in place of Jeevan Mendis while Afghanistan backed their same playing XI from their first game.

Sri Lanka raced off to 79/0 in the first powerplay courtesy of Kusal Perera who took the attack to the Afghanistan seamers, before Afghanistan skipper Gulbadin Naib had to turn to his spinners in just the 6th over of the match.

The Afghanistani quicks – Dawlat Zadran and Hamid Hassan – got carried away with the grass on the surface as they tried to do too many things with both bowlers being all over the place in their opening spells.

The opening stand finally ended on 92 when skipper Karunaratne danced down the track only to hole out at long-on off Mohammad Nabi, as he played a good supporting role to Kusal Perera making 30 off 45 balls.

Sri Lanka were cruising before the 22nd over of their innings delivered by Nabi turned the game around completely. First it was Lahiru Thirimanne who was cleaned bowled off the second delivery. Kusal Mendis quickly followed when he edged one to slip off the fourth ball, before senior batsman Angelo Mathews followed him when he bottom edged the last ball of the Nabi over to wicket-keeper Mohammed Shehzad’s pad, only to see the ricochet falling in the hands of the slip fielder.

Sri Lanka were going through one of their familiar batting collapses of late. Dhananjaya de Silva also joined in as he edged one to the wicket keeper off Hamid Hassan as the Afghan players and spectators went into wild celebrations.

Thisara Perera’s chaotic run-out added to Sri Lanka’s misery as they were all of a sudden in danger of being bowled out under 200 with Kusal Perera watching the drama unfold at the other end.

Wickets continued to tumble as Isuru Udana was the next to go trying to hit quick bowler Dawlat Zadran out of the ground with 19 overs to go, only to see his stumps shattered.

Kusal Perera’s patience eventually ran out as he looked to reverse sweep Rashid Khan, as the ball kissed his glove on the way to the safe hand of Shehzad behind the stumps. K Perera was by far the standout batsman for Sri Lanka as he made a fluent 78 off 81 balls, but he hardly got support from the other end after the dismissals of Karinaratne and Thirimanne.

Lasith Malinga went through a couple of nervous times against Rashid khan before the heavens opened up as expected in Cardiff with Sri Lanka struggling on 182/8 after 33 overs.

Upon resumption – after a two hour break – Sri Lanka folded up for just 201 and a revised D/L target meant Afghanistan needed 187 for victory in 41 overs.

Nabi ended with four scalps for the Afghans while Rashid Khan bowled a miserly spell while also chipping in with two late strikes.

Afghanistan got off to a flier courtesy of Hazratullah Zazai as he took the attack to the Sri Lankan opening bowlers Malinga and Suranga Lakmal.

It looked like it couldn’t get any worse for Sri Lanka when Kusal Mendis dropped a sitter offered by Zazai off Malinga, but Malinga dismissed Shehzad soon after to give Sri Lanka a ray of hope.

It was all Afghanistan up until that point. It was their game to lose with the required rate less than 5 runs per an over. But their inexperience against top nations soon showed.

Isuru Udana dismissed Rahmat Shah when he edged one to slip but it was the dismissal of Zazai that brought life into Sri Lanka once again. Nuwan Pradeep who replaced Jeevan Mendis for this game delivered the perfect bumper to the well built left hander who took it on, only to see Thisara Perera running in and diving forward to a take stunning catch at fine leg to lift the Sri Lankan spirits.

Thisara then chipped in with a wicket off his first over, as the Pradeep inclusion continued to pay dividends when he claimed his second scalp to reduce Afghanistan to 57/5.

A 64 run stand for the sixth wicket between Najibullah Zadran and skipper Naib brought Afghanistan within striking distance, before the impressive Pradeep returned to break the partnership and then going on to clean up Rashid Khan as the pendulum kept swinging with Afghanistan on 123/7.

Najibullah though held one end up striking a boundary every now and again as Afghanistan inched closer giving Sri Lanka some nervy moments. Sri Lanka’s new skipper Karunaratne had no option but to turn to his old war horse, Malinga, as the experienced campaigner delivered when he removed Dawlat Zadran with a pin point yorker.

Najibullah continued to swinging his bat as he struck two fours off Isuru Udana with the second one also called a no ball because Sri Lanka made a fielding violence(not having enough men inside the circle).

However, the extra ball turned out to be the final nail in the coffin for Afghanistan as Najibullah tried to retain strike trying to steal a single off the last ball of the over, only to see captain Karunaratne throwing down the stumps direct as Sri Lanka smelled victory.

Hamid Hassan struck a six off Malinga in the next over to take the game deep, but it was short lived as Malinga delivered another brilliant yorker to seal Sri Lanka’s 34 run victory(D/L).

Pradeep ended with his career best figures capturing 4/31 off 9 overs, while Malinga contributed in an ODI win for Sri Lanka for the first time since 2017 (in 22 ODIs) chipping in with 3/39.