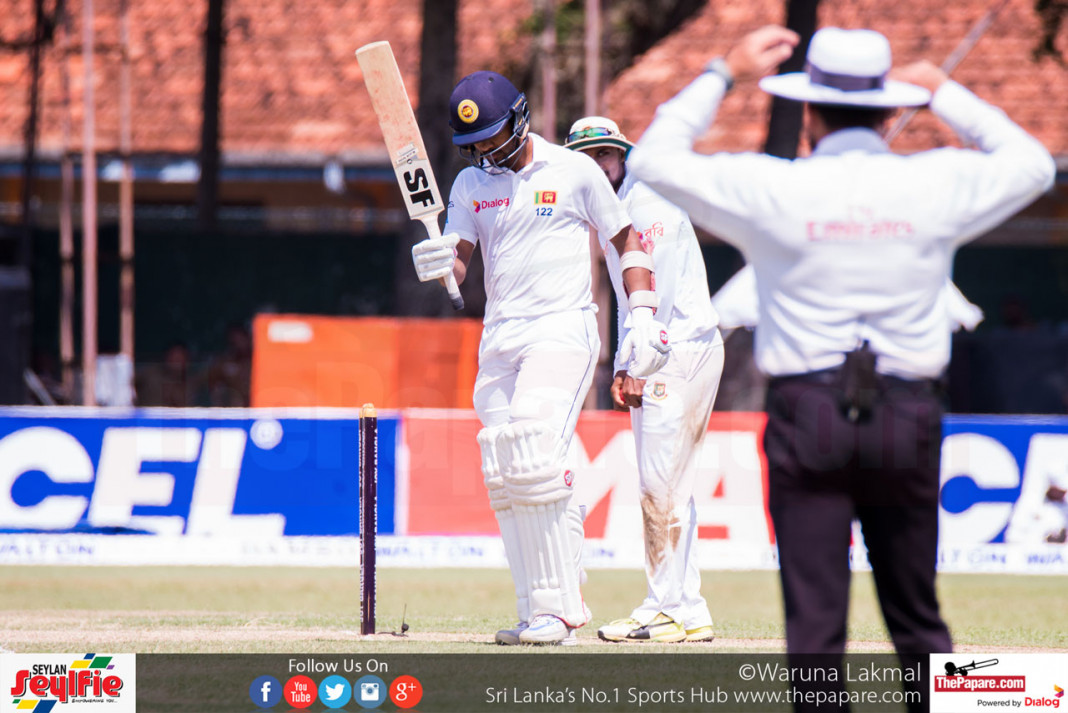 Dinesh Chandimal fought his way to his 2nd consecutive Test half century as wickets fell all around him on the 1st day of the 2nd Test between Sri Lanka and Bangladesh earlier today. When play was called off due to bad light, Sri Lanka were 238/7, with Chandimal unbeaten on 86.

Bangladesh were clearly on top in the 1st hour of the last session, when Shakib Al-Hasan had a reverse-sweeping Niroshan Dickwella bowled around his legs. The wicketkeeper batsman had batted well until then, playing the perfect foil to a more sedate Chandimal, but went for one shot too many during what was looking like a promising partnership.

Earlier in the game, Dhananjaya De Silva too had given his wicket away with a poor shot after resurrecting the Sri Lankan innings somewhat, alongside Chandimal. The pair put on 66 runs for the 5th wicket after Sri Lanka slumped to 70/4 in the opening session of play.

The hosts decided to go with the extra batsman in this game, leaving out fast bowler Lahiru Kumara for De Silva, on what is customarily a seamer-friendly surface and the move proved to be vital in the end with wickets tumbling at regular intervals.

Rahman was particularly good in the 1st hour, beating the bat on numerous occasions and eventually getting Dimuth Karunaratne to edge to gully where Mehedi Hasan took a sharp catch.

Hasan himself struck soon after when he drew Kusal Mendis out of his crease with some lovely drift and had him stumped.

Upul Tharanga survived an LBW call on DRS after he was given out and the decision was subsequently overturned as the ball was seen to be missing the stumps on review. He didn’t last much longer however as his labored innings of 7 off 32 deliveries came to an end when he nicked a Hasan delivery to slip.

Asela Gunaratne and Chandimal looked good during their 35 run partnership, but the former seemed to lose concentration after smashing a Subashish Roy delivery into his toe and was trapped right in front with the next delivery.

Chandimal’s 305 minute vigil held Sri Lanka’s innings together, on what looked like a pitch that offered something to both the fast men and spinners alike, as he survived an overturned DRS decision as well as a low catch in the deep by Mehedi Hasan. 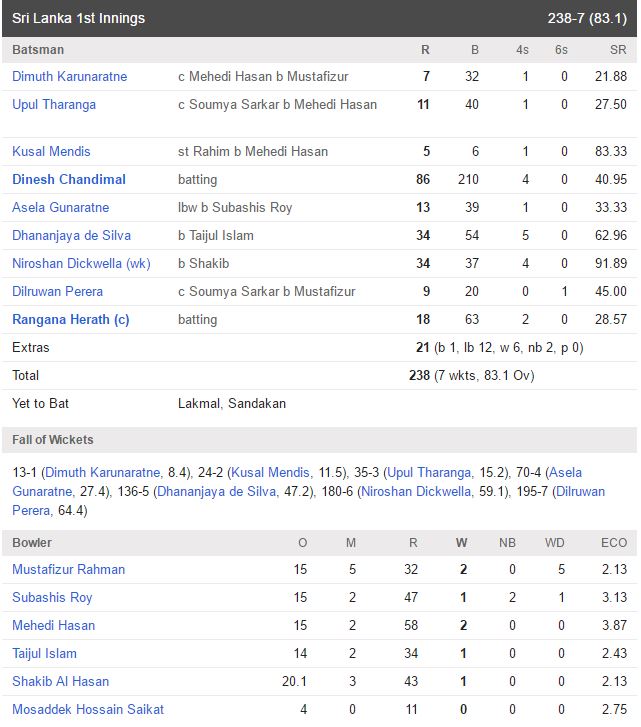