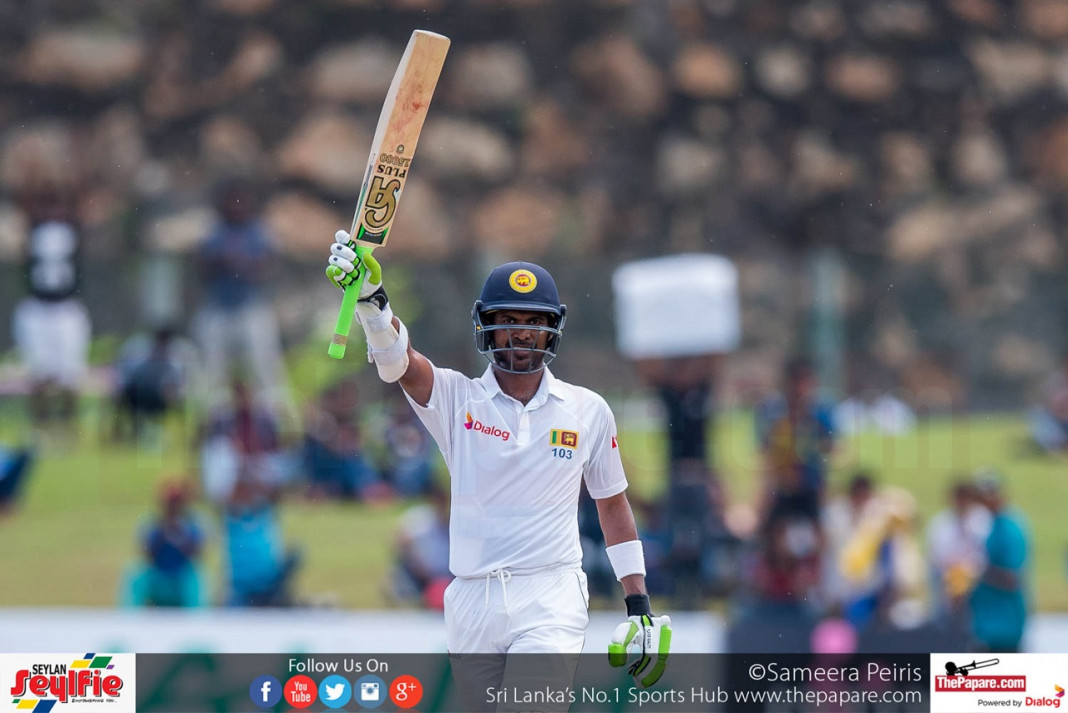 Upul Tharanga made his 1st ton on home soil and his 3rd overall in Test cricket to help Sri Lanka set Bangladesh a near impossible target of 457 in little under 4 sessions of play in the 1st Test at the Galle International Stadium.


After losing just over a session to bad light and rain last evening, the day’s play began at 9.45 am but more bad weather meant that the umpires were forced to call proceedings off at 4.56pm.

Upul Tharanga and Dimuth Karunaratne put on a 69 run opening partnership to help Sri Lanka extend their lead to 269 at the end of the 1st session of play. Karunaratne was put down at short extra cover by Shaqib Al-Hasan off the bowling of Mehedi Hasan when he was on 7 but that was the only chance Bangladesh could eke out in the 1st hour of play.

Karunaratne would rue missing out on a big score as he was the only batsman to fall in the 1st session when he played a short-armed jab straight to the deep square leg fielder.

Pushing for a win, the Lankans upped the ante in the 2nd session of play where they managed to score 160 runs at 5.16 rpo. During that period Tharanga went on to make his 3rd Test ton, his 1st as an opener since he made 165 against the same opposition in Bogra more than a decade ago in 2006. Despite being somewhat sedate in the 1st session, he attacked more after the Lunch break; his knock consisted of 2 sixes and 11 boundaries.

Sri Lankan skipper Rangana Herath opted to keep batting after the dismissal of Tharanga despite 300 being the highest total made by a side batting 4th in Galle. This allowed out of form (and favour) Dinesh Chandimal to notch up a much needed half century.

Tharanga was soon followed to the pavilion by Asela Gunaratne and Niroshan Dickwella too played some enterprising shots on his way to 15. Dilruwan Perera was in next and seemed to be timing the ball to perfection from the moment he walked in to bat but was fortunate to have been given a chance on the boundary when he was on 0. He went on to make 33 off just 27 balls as Sri Lanka’s lead swelled.

Despite the lead having risen to 429 by tea, Sri Lanka opted to bat on after the break and only decided to call it quits once Perera was dismissed.

For the visitors it was that man Mehedi Hasan once again, who was most impressive on what was an unconventionally unhelpful Galle surface. The ball took some turn during the latter part of Sri Lanka’s innings, perhaps serving to build some hope in the Lankan dressing room.

However, despite this, the Bangladeshi opening pair began well once again, with Soumya Sarkar in particular looking to attack the spinners. He raced to 53 off just 47 deliveries, slamming 6 fours and one six as Bangladesh sped to 67/0 when bad light halted play for the day.

Bangladesh will need 390 runs for a win on the final day of the 1st Test. 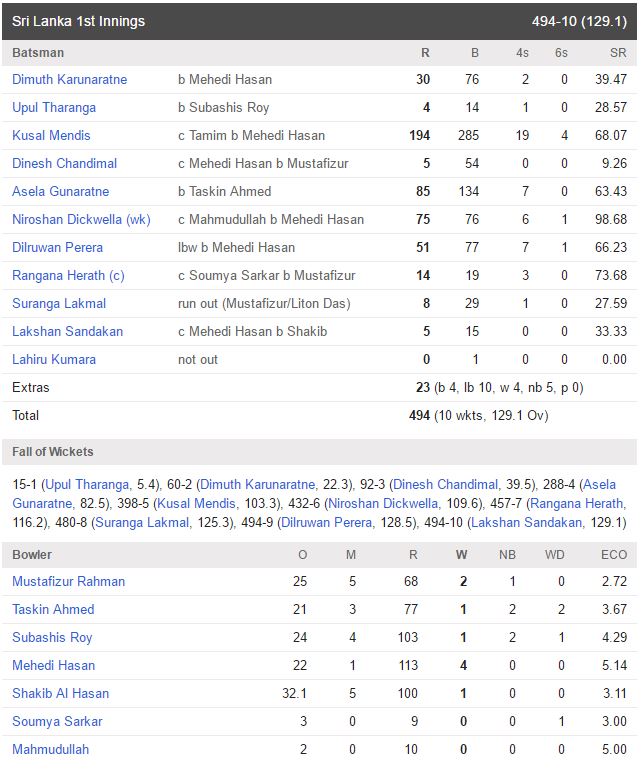 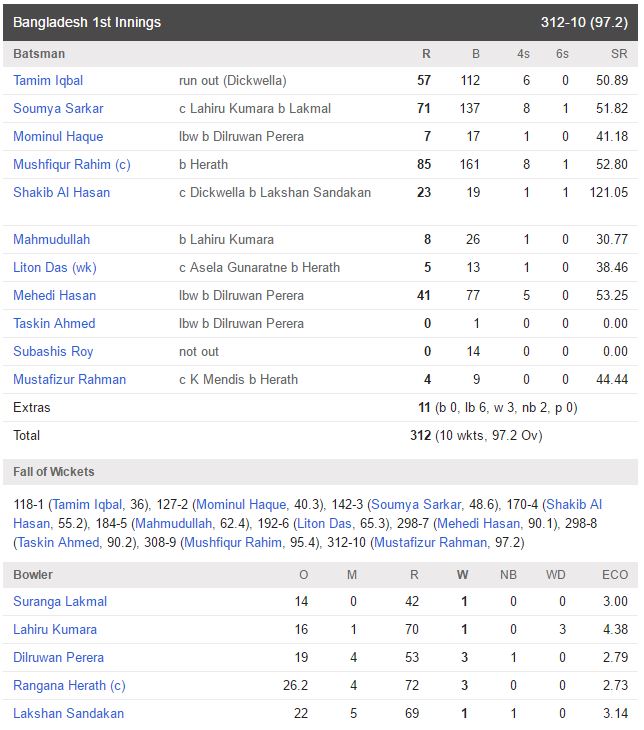 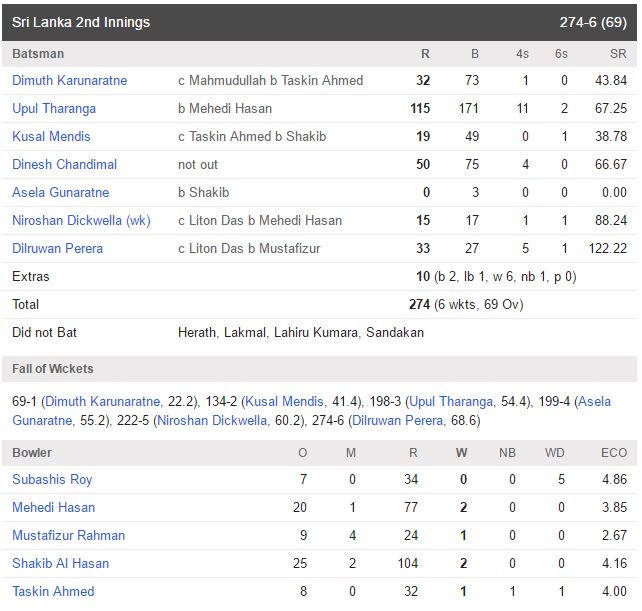 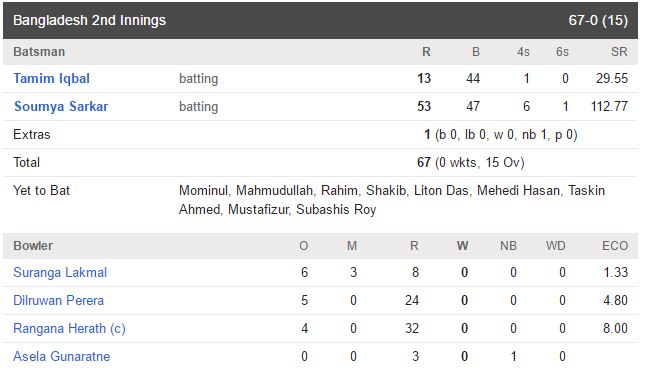