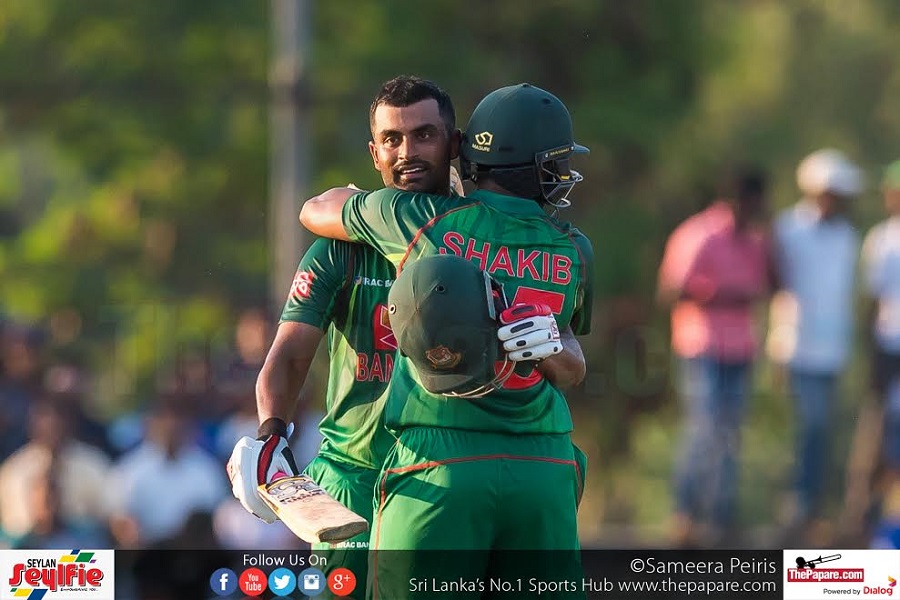 Tamim Iqbal’s 8th ODI ton and a 144 run partnership between him and Shakib Al-Hasan helped Bangladesh to 90 run win in the 1st ODI at the Rangiri Dambulla Stadium earlier today. Chasing 325 for victory, Sri Lanka slumped to 234 all out in 45.1 overs as the visitors went 1-0 up in the 3 match ODI series.


Upul Tharanga won the toss for the hosts but the pitch had little to no help for the bowlers even with the new ball. Suranga Lakmal and Lahiru Kumara opened the bowling for Sri Lanka and were handled with confidence by the Bangladeshi openers Tamim Iqbal and Soumya Sarkar, who are both coming off a fruitful Test series.

Sarkar played across the line to Lakmal and perished nicking behind to Dinesh Chandimal but 1 down batsman Sabbir Rahman joined Tamim for a dominant 90 run partnership as they took the Lankan bowlers to all parts.

Sri Lanka got the breakthrough via Asela Gunaratne, who is turning out to be a man with a golden arm, as he had Rahman caught at short extra cover by a diving Tharanga.

A few deliveries later Lakshan Sandakan had Mushfiqur Rahim caught and bowled as the Sri Lankans looked to hold down the visitors. Despite the 2 quick wickets, Bangladesh continued to score freely with two of their most experienced batsmen in Tamim and Shakib Al-Hasan at the crease putting together 114. The pair looked completely at ease in the middle, taking the Lankan attack for 109 in the final 10 with Mossadek Hossain and Mahmudullah chipping in with 24 and 13 respectively.

Asela Gunaratne was by far the pick of the bowlers, going for just 40 in his quota of overs while claiming the vital wicket of Sabbir Rahman.

The contrast in the fielding standards between the two teams was drastic as Sri Lanka would have easily conceded over 20 runs via mis-fields while Bangladesh were tidy as usual, with the odd hiccup in the field.

Chasing what would have been the highest 2nd innings total made at the Rangiri Dambulla Grounds, Sri Lanka got off to a bad start as Dhanushka Gunathilake was out in the very 1st over. He reviewed the LBW decision but the ball was shown to be clipping the bails and so the umpire’s decision stood.

Wickets continued to fall at regular intervals and Bangladesh showed their class with the ball as Sri Lanka could not really find any bowler to target. At 31/3 in 11 overs Sri Lanka had a long hard way back and despite the fighting knocks by Dinesh Chandimal, Thisara Perera and Sachith Pathirana, the hosts fell well short of the target.

The only heartening fact for the Sri Lankans will be the innings of Thisara Perera, who made 55 in just 35 deliveries, letting loose some of those trademark Thisara Perera shots to the boundary.

The Bangladeshis will be pleased with their all-round efforts as their batting, bowling and fielding all clicked on the day. 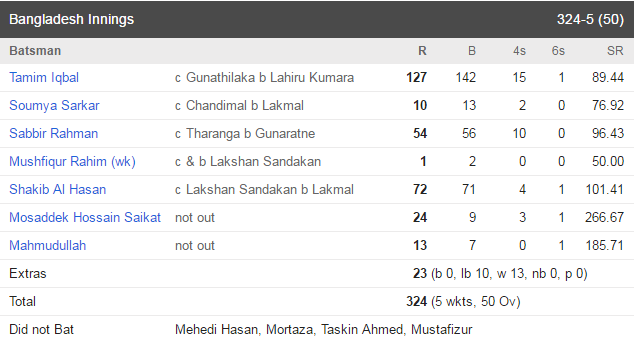 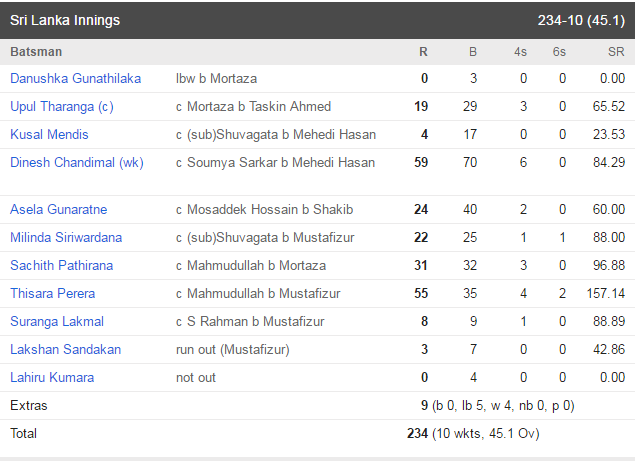