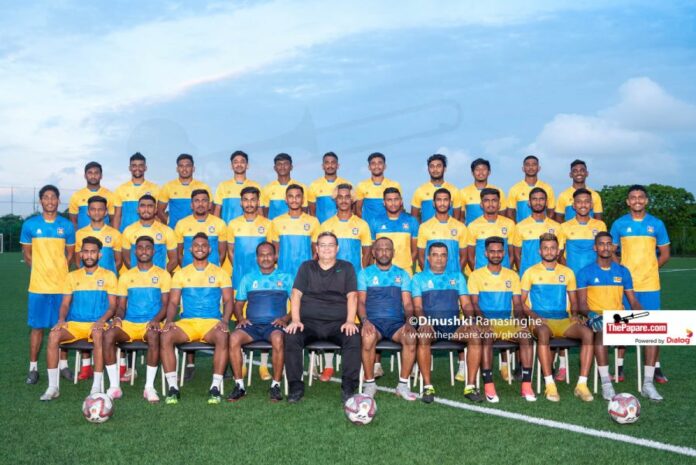 Football Sri Lanka (FSL) announced the 23-man Sri Lanka squad for the upcoming 2022 AFC U23 Asian Cup qualifiers, which will be held in Qatar from 25th-31st October.

Sri Lanka U23 will be captained by Sasanga Dilhara, and Asela Madushan will be the Vice-Captain. Former Sri Lanka Captain and Head Coach Mohamed Amanulla will be the Head Coach of the team and will be ably supported by Assistant Coaches Ratnam Jusmin, Saman Dayawansa, and trainer Marcus Ferreira.

The squad had no surprises, except for the exclusion of Mohamed Aakib and Dillon De Silva. Aakib was left out of the squad at the last moment prior to departure – he was supposed to join the squad after his National duties at the SAFF Championship, but according to sources he was suffering from high fever.

Dillon De Silva, who impressed once again in the SAFF Championship, is also not included. It is unclear if his club, Queens Park Rangers, has not released him, and FSL too has failed to provide any reason.

Sasanga, Lakshan Dananjaya, Nuwan Gimhana, Pathum Vimukthi, Shabeer Razooniya, Rifkhan, Aman Faizer and Vikum Avishka were all part of the disastrous campaign in the 2020 AFC U23 Asian Cup qualification under Head Coach Nizam Packeer Ali, and will aspire for a better performance. They conceded 20 goals in three games without scoring any, losing 9-0 to Palestine and Bahrain while Bangladesh got a 2-0 win.

Amanulla, who was also the Head Coach when Sri Lanka U19 had an impressive performance in the 2020 AFC U19 Asian Cup qualification, has included Shabeer, Mohamed Mushfir, Abdul Basith, Mohamed Kurshith, Mohamed Murshid, Raza Rumy, Shishan Prabuddha and Thenushan from that squad.

Among the new inclusions, former Sri Lanka U19 Captain Shenal Sandesh, Daniel Magrath and Rumesh Mendis impressed and had good performances in the Super League. Sri Lanka are in Group in A alongside hosts Qatar, Yemen and Syria.