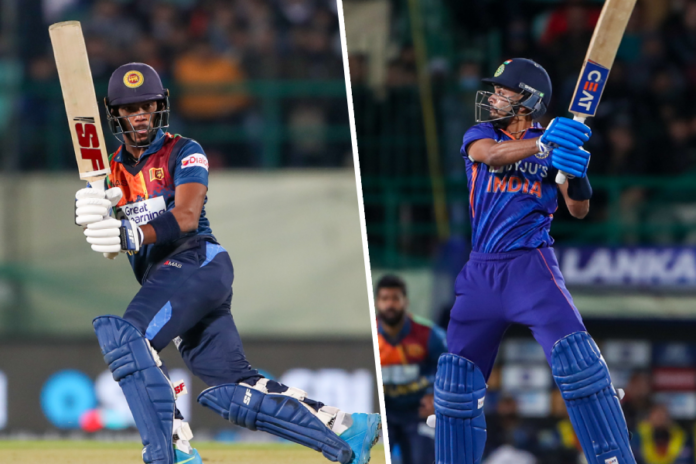 After a shaky start, India chased down 184 runs with 17 balls to spare as they seal the series 2-0. India has now won 7 consecutive home T20I series and 11 T20Is on the trot.

Resilience was the key for the hosts in this fine contest of T20 Cricket in Dharamshala. The Lankans had the game in their pocket for a majority of the match, yet managed to let it slip towards the latter end of it.

Bowling in the death has been a problem for Sri Lanka for quite a while now. They have gotten so close in several games, yet have not been able to make it all the way – it was the same classic situation yet again.

With India chasing 184 runs for victory, the visitors managed to pick the dangerous Rohit Sharma in the very first over and keep an in-form Ishan Kishan quiet throughout the powerplay, snubbing him off for 16.

Dushmantha Chameera picked up Rohit Sharma for the fifth time in T20Is to become the only bowler to have gotten a particular batter out 5 times in this format of the game.

Lahiru Kumara and Chameera bowled absolute thunders with the new ball, and on 2 for 44, India was stunned by the start Sri Lanka got with the ball.

Sanju Samson and Shreyas Iyer who were at the centre had no answers for the pace when they began. However, that was exactly when Dasun Shanaka and Co. let things slide.

They allowed a nervous-looking Sanju Samson, who was struggling to put bat-on-ball, build up an 84-run partnership with Shreyas Iyer.

Iyer, who is in tremendous form, scored a match-winning 74 runs, while Sanju Samson, who tottered at the start, finished with an impactful 39 runs off 25 deliveries.

Samson hit 23 runs in 5 balls off Lahiru Kumara although he was out in the same over, caught at third-man with a stunning catch by Binura Fernando.

However, by then he had done enough and more damage. Allowing Samson to settle down was when Sri Lanka let the game escape from their grasp.

Lahiru Kumara was taken off the attack on the sixth over when he had just picked Kishan’s wicket, and had figures of 8 for 1 in 2 overs, with Samson having faced only 4 deliveries among which one was an LBW referral.

When Kumara came back to bowl again in the 13th over, he was clubbed for 23 runs.

There was no coming back for Sri Lanka from that point.

Shreyas Iyer held his nerve and played a stellar knock to take India over the line. Again, it is the way in which he works the field and toys with the bowler that stood out of his innings.

Ravindra Jadeja came in and scored 45 off 18 deliveries to add the icing on the cake, as India went from it’s-a-tough-ask to chased-it-down-with-ease.

In the first innings, Sri Lanka finally got that start with the bat they were longing for. The openers Danushka Gunathilaka and Pathum Nissanka put on a 67-run stand for the first wicket. This was the highest T20I opening stand for Sri Lanka since March 2021, when the same pair posted a 95-run opening stand against the Windies.

This was clearly an aspect that was holding the Lankans behind. Now, it is a matter of how they can replicate this consistently.

Gunathilaka made a useful 38 runs at the top of the order, while Pathum Nissanka carried his form through from Australia to make his highest T20I score of 73 runs.

Skipper Dasun Shanaka played a cracking knock of 47 off 17 to take Sri Lanka to a formidable score of 183 runs.

It was a more than adequate total to defend on that Dharamshala surface, but being defensive and holding back once again cost the game for Sri Lanka.