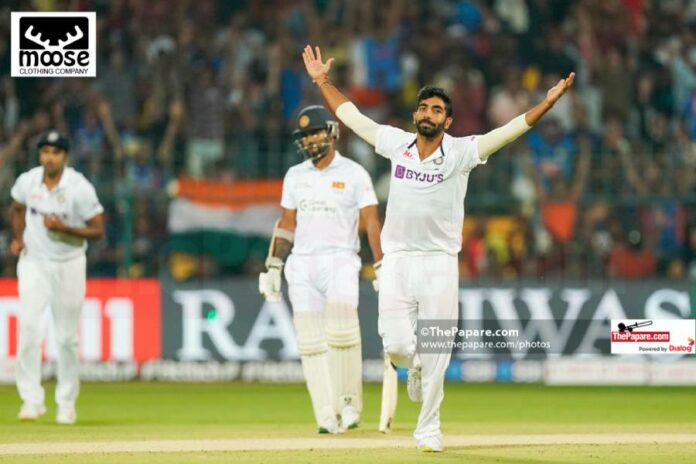 Sri Lanka lost opener Lahiru Thirimanne in the 1st over of their 2nd innings, but skipper Dimuth Karunaratne and Kusal Mendis managed to see off the Indian attack for day 2. Sri Lanka went to stumps at 28/1, still 419 adrift of the target of 447 set by the hosts.

India declared their 2nd innings at the fall of the 9th wicket, leaving Sri Lanka a target of 447 and just over a half an hour to negotiate at the end of day 2.

Earlier in the day, Sri Lanka crumbled in the first session, after coming into the day 6 wickets down. Niroshan Dickwella looked to start off well, getting two boundaries off the 1st over of the day, before leaving Lasith Embuldeniya to face up to R Ashwin on the other end. Embuldeniya did well in defense but inexplicably took a single off the last delivery of the over to take strike in the next over and was duly gotten rid of by Jasprit Bumrah.

It was the kind of decision-making characteristic of Sri Lanka during this series, where they are yet to cross 200 in three innings.

They ended up losing their last 4 wickets for 23 runs, giving India a lead of 143 going into their 2nd innings.

With plenty of time left in the Test, India just batted and batted and batted. The track which had looked like a minefield with Sri Lankan batters at the crease, suddenly turned into a typical day 2 pitch with the Indians batting.

There was some variable bounce and turn, but the Indian batters negotiated it with ease, with more of less every batter managing a start. Rishabh Pant went about his business as usual, clobbering a 28-ball half century – the fastest by an Indian in Tests.

During Pant’s stay at the crease, India were cruising at 7 runs an over, incredible considering this is the same pitch that produced 16 wickets on day 1.

Shreyas Iyer continued his form, getting another half-century to push India’s lead towards 450.

Praveen Jayawickrama and Lasith Embuldeniya picked up 7 wickets between them but were far too inconsistent in their lines and lengths to put the batters under any sustained pressure.

It was another day of demoralizing cricket by the visitors against a ruthless Indian side looking to move up the ICC Test Championship table.