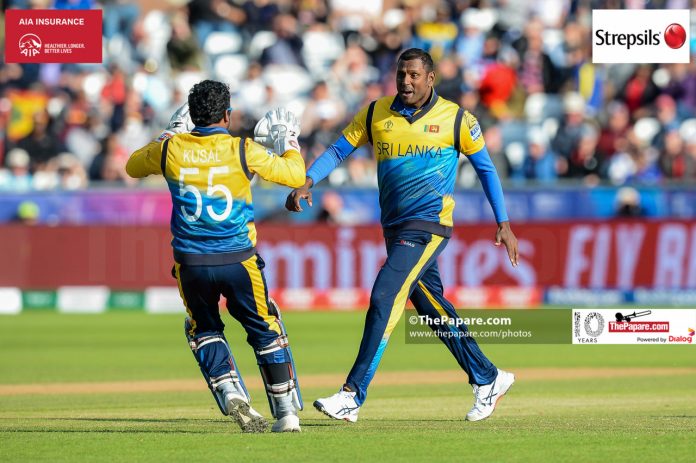 The Sri Lanka squad for the upcoming tour of India which will commence on 5th January has been released featuring the former skipper Angelo Mathews in the T20I squad after 18 months.

Only two changes have been made to the squad which was thrashed by Aaron Finch’s men in Australia for Sri Lanka’s first T20I series defeat down under. After battling with many injuries on his hamstring, Angelo Mathews is finally expected to bowl in the series, adding the much-needed impetus to Sri Lanka’s bowling unit which only managed to dismiss 6 Aussie scalps during the 3 T20Is.

Unfortunately, Sri Lanka’s first choice seam option; Nuwan Pradeep has twisted his ankle at practice last week as Kasun Rajitha who wasn’t originally included in the squad draft, will fill his void. Shehan Jayasuriya who has performed reasonably well in the T20I series in Pakistan, has faced the axe from the selection committee making the way for another all-rounder; Dhananjaya de Silva who pipped Jayasuriya for his all-round abilities.

Lasith Malinga will lead the 16-member squad which will definitely face a tough challenge to open the account in 2020 from Virat Kohli-led India. It will be interesting to see how skipper Malinga will improve his captaincy record which has faced a drought of wins in 2019. (1-won | 9-Lost)

Malinga will be joined by Isuru Udana, Lahiru Kumara and Kasun Rajitha on the pace front while Wanindu Hasaranga and Laskshan Sandakan will be the premier spinners for Sri Lanka on the tour. They will be assisted by Dhananjaya de Silva and Dhanushka Gunathilaka’s part time off spin and Angelo Mathews and Dasun Shanaka’s medium pace.

The Sri Lanka batting unit looks solid with the addition of Mathews and there will be a tight fight for the top order spots in the batting as inform Oshada Fernando and Avishka Fernando might push Kusal Mendis and Niroshan Dickwella for the places in the playing XI.

When Sri Lanka last toured India for a T20I series under the captaincy of Thisara Perera, they were hammered for a 3-0 series defeat.

This will be a golden opportunity for Sri Lanka to test their strength against one of the strongest T20 units in the World in their own backyard before the 2020 T20 World Cup which will be held in October in Australia.