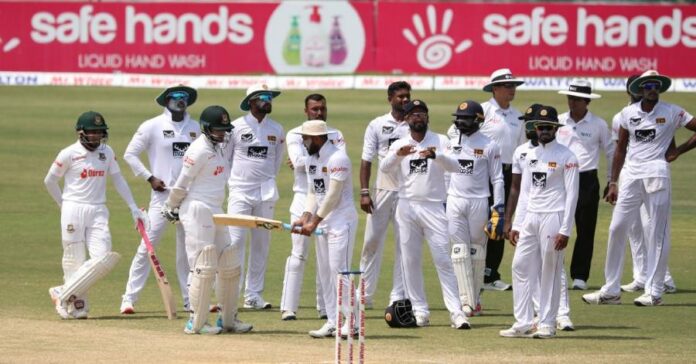 Sri Lanka has named their playing XI for the 2nd Test against Bangladesh. The match will commence tomorrow (23rd May – Monday) in Mirpur.

The series opener was a stalemate in Chattogram which did not see through to at least three completed innings within the space of five playing days.

Embuldeniya took only one wicket after bowling 47 overs on a batting-friendly surface in Chattogram. Jayawickrama, who had a memorable debut against Bangladesh last year in Pallekelle, taking a 11-wicket match-bag, will partner up with off-spinner Ramesh Mendis.

Kasun Rajitha, the highest wicket-taker for Sri Lanka with his best Test figures, 4 for 60 will keep his place after he came into the team as a concussion substitute for Vishwa Fernando. Rajitha will play alongside right-arm quick Asitha Fernando as Sri Lanka opted to play two seamers on a pitch which is set to provide plenty of assistance for the spinners.

“I don’t think this is going to be an easy game at all. Both teams want to win this game. I think the last game was a close-fought contest. The momentum swung both ways, rapidly at times. Bangladesh had us on the ropes at times. We had to fight back hard to make sure that we got back into the game. I think this will be similar. The game will go forward at a quicker pace. We have to be ready for that. I am looking forward to some exciting cricket.” Sri Lanka Head Coach Chris Silverwood said on the eve of the 2nd Test match.

Bangladesh are expected to make at least two forced changes to their team due to injuries to Nayeem Hasan and seamer Shoriful Islam as both teams chase valuable points in the ICC World Test Championship.