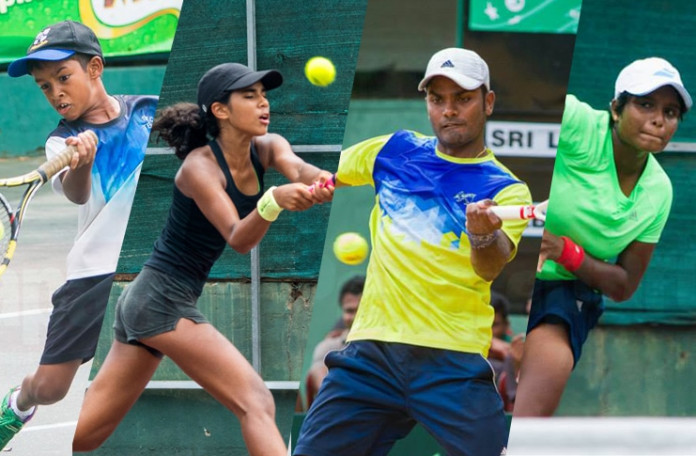 As we count the days for the closure of the calendar year, it is time to evaluate the progress of the racket sport in its centenary year.

The 2015 season was a comprehensive passage with its ups and downs for the country in the sporting perspective but laid the foundation for the sustainable growth for the years to come.

We at ThePapare.com take a look at the important milestones that we passed during the year and how such events shaped the destiny of the sport.

Sri Lanka earned their way to the Division II in Asia-Oceania group of the Davis Cup and was put in hot water when they were drawn with Philippines for the first round. The Lankan contingent who lacked the proper practice time and experience suffered badly in Manila with the visitors not having the privilege of winning any of the five games.

An encounter that expected to be a one sided draw due to the inexperienced  Lebanese side, unexpectedly took a rare twist in the second day when the Lankan duo Dineshkanthan Thangarajah and Harshana Godamanne lost to the Lebanese pair in the doubles. The Lebanese took charge of the fourth single narrowing it down to the decisive fifth and final encounter. Carrying the burden of the nation, it was Harshana Godamanne who kept hopes up winning the game 3-0.

It was a lackluster performance by the Sri Lankans against a Lebanese team who were playing their first Davis Cup and still in their teenage years. With Sri Lanka escaping the wooden spoon of relegation, Sri Lanka are now faced with Thailand for the 2016 draw and if they survive the Thai players, the chances of Sri Lanka getting a promotion to the next tier could be a reality.

This year’s national run was one of the most phenomenal ones in the sports’ long-standing history of 100 years. It was a year where tables turned and the wooden boards at the SLTA premises had to get new names engraved on the national champion boards.

The Boys Under 18 Singles title that is the highest prize on offer in the Junior Nationals went to 14-year-old Avindra Perera from S. Thomas’ College. This was after Perera fought in the under 18 tier amongst players who were around three or four years above his age. It was a clear indication of the better things to come in the future of the racket sport for the country.

The Girls Under 18 tussle was a contest between the duo; Thisuri Molligoda and Nethmi Waduge. As the final came down, it was Nethmi Waduge who took home the under 18 title.

Despite the action packed quarterfinal and semifinal encounters, the final was clear let down as the match concluded in the midway with Sharmal Dissanayake opting out with an injury. This was Dissanayake’s first national final and gives indications of his intentions in the coming years.

All attention in the nationals was focused on the Women’s title run where a new champion was crowned after a long lapse. The defending champion and veteran Amritha Muttaiah had paved the way for the young blood as she was defeated in the semifinals by Nethmi Waduge and it was once again a Molligoda-Waduge battle in the final.

This time around it was Molligoda who came out on top in the contest and the 18 year old was crowned as the new national champion of the country in the sport’s centenary year.

Development to the region

The SLTA announcement on the regional plan in order to take the sport beyond Colombo was a great start to a fruitful investment but the question lies on how practical the solutions would be. Currently only Kandy, Negombo and Batticaloa operate regional hubs for the sport outside Colombo and in order to increase the participation in the sport, the construction of tennis courts is of utmost importance.

The Junior ITF initiative was a boomer for the governing body with the introduction of the orange, green and yellow ball concepts. The first of the Junior Tennis initiatives came up in October this year and saw a total of over 700 participants from around the country making their way to the SLTA premises. Such initiatives will surely lay the foundation for prospective tennis players who would learn their basics and come up as talented players and investments for the future.

In conclusion, the centenary year for tennis has been a year filled with mixed reactions. The Lankans will need to up their game when they face another test at the Davis cup next year with hopes of promotion. The year has showcased the talent in the youth and will be interesting to see players of such stature working their way through to the top.