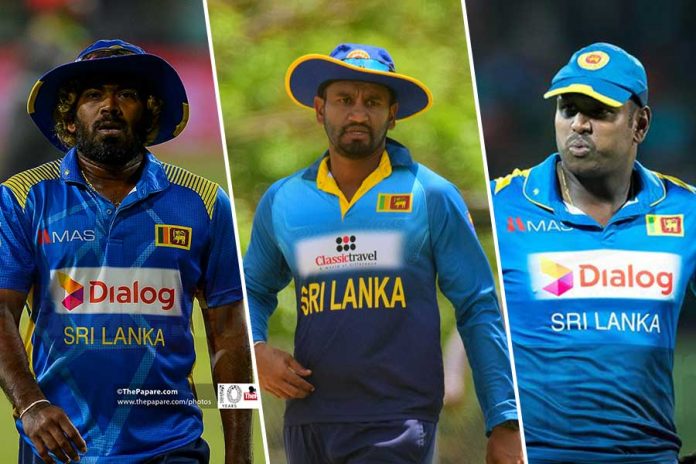 With less than 50 days to go for the ICC Cricket World Cup 2019, Sri Lanka is still undecided on who will lead the team in England & Wales.

Most other teams have known who will lead their team at the marquee event for at least two years now, but Sri Lanka’s habit of chopping and changing their captains, which has happened regularly in the past couple of years, may continue when picking the skipper for the World Cup too.

Sri Lanka is set to name their squad in the next few days and currently, there are three names being discussed in closed-door meetings amongst the selection committee led by former Sri Lanka fast bowler Asantha De Mel.

The selectors have repeatedly told the media that they will first select the squad and then pick the suitable captain, meaning that they are still weighing their options.

The current captain, Lasith Malinga, has not won a single ODI as the leader of the team, since being appointed skipper for the recently concluded New Zealand and South Africa tours. There have also been rumours that Malinga does not have the support of the entire dressing room.

Malinga’s leadership skills are unquestionable. His cricketing brain can match any of the smartest players’ currently in the Cricketing world. But, will the selectors persist with the man who led Sri Lanka to World T20 glory five years ago?

He is without a doubt Sri Lanka’s best bowler, but has also reportedly threatened to pull out of the World Cup squad if he is stripped of the captaincy. One would certainly hope that there was no such conversation as Sri Lanka need his services now more than ever.

In the past few weeks, a new candidate for the captaincy emerged in Dimuth Karunaratne. The left-handed opening batsman has not played ODIs since 2015. But, a historic 2-0 whitewash over South Africa in Tests with basically a bunch of unknowns under him, has proved Karunaratne’s leadership abilities.

Karunaratne, Sri Lanka’s regular Test opener, was asked to give up on his County Cricket stint with Hampshire by SLC after the selectors suggested that they were in need of a stable opening batsman and a new ODI captain. After giving up on his County dream, Karunaratne started scoring plenty of runs in domestic cricket in the white-ball format.

With his recent performances in the Provincial Tournament, Karunaratne has somewhat guaranteed his spot in the 15-member squad, as well as strengthened his claim to lead the side. But is it the correct time to hand the captaincy to a player who has not donned the ODI jersey in over four years?

The selectors could take a gamble and hand over an under-performing team to Karunaratne and hope his fresh thinking and strategies will magically rejuvenate Sri Lanka in the UK.

The third and final contender for the captaincy is former Captain Angelo Mathews. He led the team in the last World Cup and since then has had so many injuries that many would be satisfied with Mathews the batsman fit and healthy for at least the next couple of months, even if Mathews the captain doesn’t happen.

The selectors have mentioned that “Mathews is someone who has been accepted by everyone in the team”, something that gives him a leg-up against Malinga. After another injury lay-off, Mathews regained his form and match fitness, finishing as the top run-scorer in the Provincial Tournament.

But, will Mathews and Head Coach Chandika Hathurusingha work cohesively again after what happened when Sri Lanka lost to Bangladesh and Afghanistan in the Asia Cup last year? Bad blood between Mathews and Hathurusingha is no secret with Mathews being stripped of the captaincy for the second time in two years after the team’s embarresing exit from the Asia Cup. According to reliable sources, Mathews has agreed to accept the captaincy and sort out differences with the Head Coach.

After Sri Lanka’s quarter-final exit in the last World Cup, Mathews should have been leading the team without any disruptions in the past four years and built a solid ODI outfit. The team’s performances and his own body didn’t help his cause.

Interestingly, Sri Lanka last won an ODI in October 2018 and under Dinesh Chandimal.

No matter who captains the team, he will have plenty of work and thinking to do. Sri Lanka punch above their weight in ICC tournaments, but, it will take some doing for Sri Lanka to qualify for the semi-finals in England & Wales.

Who should be Sri Lanka’s Captain in the ICC Cricket World Cup 2019? Comment on your choice below.