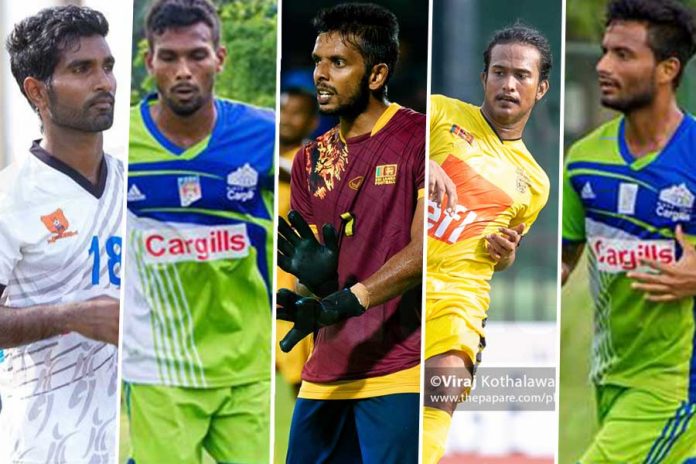 The Football Federation of Sri Lanka (FFSL) has dropped Sujan Perera and Mohamed Aakib and included five experienced players into the 23-man Sri Lanka squad for the upcoming Bangabandhu Gold Cup in Bangladesh.

In a surprising decision, the FFSL has decided to drop Sujan Perera, who has been Sri Lanka’s best player in the 2020 FIFA World Cup Qualifiers.

Mohamed Aakib, Duckson Paulus, Sasanka Dilhara, Mohamed Musthaq, Madushan De Silva and Naveen Jude have also lost their places in the squad while Chamod Dilshan is out due to a knee injury. Aakib, Paulus, De Silva and Jude have been regular starters for Sri Lanka throughout the World Cup Qualifiers.

However, in the Ministry of Sports and Youth Affairs approved 23 player squad, which has been seen by ThePapare.com, dated 8th January 2020 has Aakib’s name in the roster but in the Press Release by the FFSL on 9th January, his name was replaced by Waseem Razeek.

FFSL has recalled Zarwan Johar, Edison Figurado, Gnanaruban Vinoth, Ruwan Arunasiri and Amith Kumara after more than a year in exile. Shabeer Razooniya who was dropped for the World Cup Qualifier against Turkmenistan and the South Asian Games 2019 have been added. Tharmakulanathan Kajakopan makes his way into the squad for the first time.

The FFSL in their press release have not given reasons for the changes in the squad.

Sri Lanka will be participating in the 2020 Bangabandhu Gold Cup from the 15th-25th of January in Bangladesh. The 6th edition of the tournament, named after the Father of the Nation Bangabandhu Sheikh Mujibur Rahman, is organized by the Bangladesh Football Federation.

Six teams will be participating in the tournament which is divided into two groups of three. Sri Lanka, ranked 205th in the world, are drawn in Group A alongside Bangladesh and Palestine who are ranked 187th and 106th respectively. Group B has Burundi (151), Mauritius (172) and Seychelles (200).

Sri Lanka has participated twice in the tournament in 2015 & 2016 and was knocked out from the group stage on both occasions.

The Palestinian team is the defending champion. They raised the trophy by beating Tajikistan 4–3 in a penalty shoot-out after regulation time and extra time ended in a 0–0 draw on 12th October 2018.