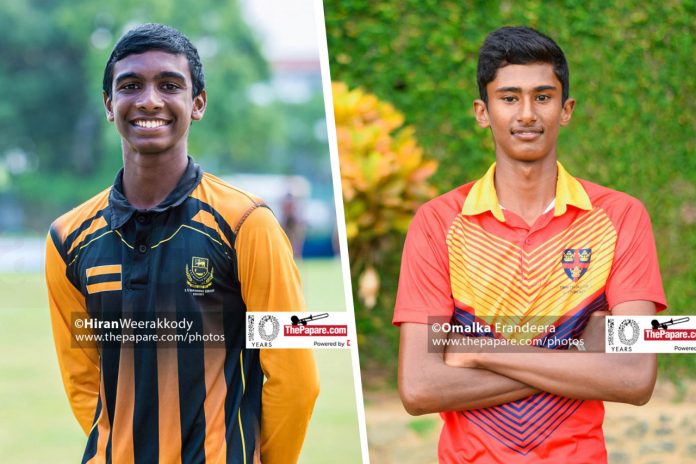 The pre-quarter finals of the Singer U17 division 1 cricket tournament 2019 kicked off today with Trinity College, Kandy taking on Mahinda College, Galle and D.S. Senanayake College, Colombo battling it out with St. Sylvester’s College, Kandy.

The game saw a delayed start due to wet ground conditions which was a result of overnight showers in Kandy. The game was reduced to a 47-over-a-side fixture.

Mahendra Jayathilaka led the batting for D.S. Senanayake College who had traveled up the hills to play the game at the Prison Grounds in Pallekele. Manindra hit a splendid knock of 73 runs after his team was asked to bat first by the hosts who won the toss. Thimira Gunawardena (62) and Pamuditha Perera (61) both struck half-centuries to make it a complete performance for the Colombo school. The youngsters from D.S made 242 runs in their quota of overs.

There was barely any chase from the Kandy school as the boys fell one after the other after getting positive starts. Pasindu Denipitiya looked impressive as he bagged 3 wickets for 23 runs. St. Sylvester’s College were uprooted quite comfortably by the visitors for 149 runs, ending their run in the tournament.

Knock-Out stage of U17 Schools Cricket tournament set to commence

The U17 Division I schools cricket tournament 2019 for the ‘Singer Trophy’ is all set to begin its knock-out…..

It was a low-scoring affair between Trinity College and Mahinda College at the Asgiriya Stadium, Kandy. The game was also a rain-affected fixture which caused it to be reduced to 42-overs aside.

Trinity College, who won the toss and elected to bat first, scored runs using up all their wickets. Ranuda Somarathna remained unbeaten as Trinity College was restricted to just 160 runs inside 30 overs. Somarathne shone with the bat, registering 57 runs to his name.

Sri Lanka youth player, Navod Paranavithana bagged 4 wickets for 29 runs giving Mahinda College the kind of start they would have fancied. Chethiya Gunasekara complimented him brilliantly with 3 scalps to his name.

But, Paranavithana who is the star batsman of the team failed in his stronger suit, so did his teammates, as the boys from down south fell 30 runs short of what seemed a below-par target.

Trinity College became the second team to book their place in the quarter-finals of the tournament.