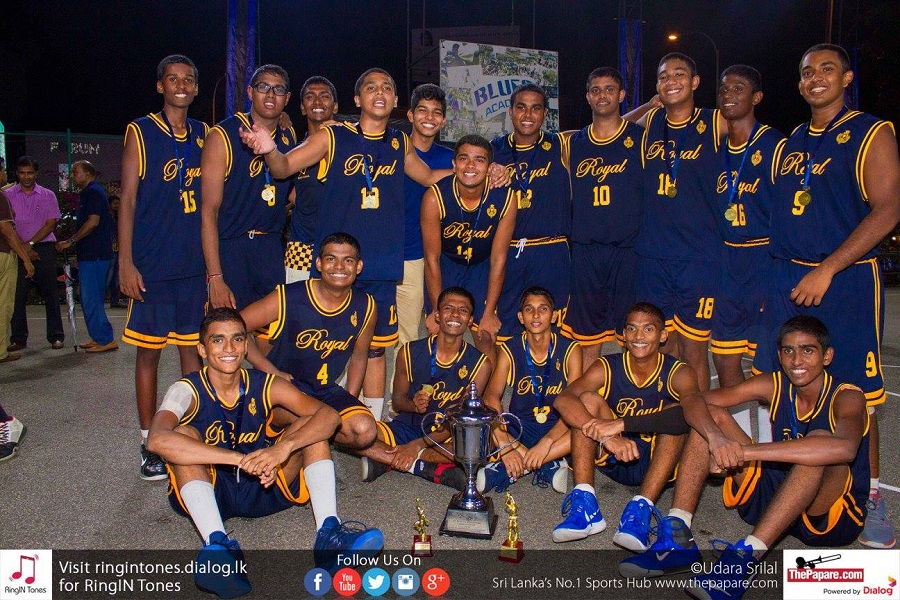 Royal College took on S. Thomas` College – Mount Lavinia for the D.S. Senanayake Challenge Trophy at Hendry Pedris Basketball Complex. The annual event saw off its 14th edition as the lads from Reid Avenue booked the trophy at the final buzzer, 44-42.

Both teams were in on the game from the tip-off. Royal College closed down the maiden quarter with a slight edge of two points,12-10.  Even though the lads from Reid Avenue were up by a couple of points, their key player Rukshan Atapattu fell in foul trouble early giving away a couple inside the first half.

Royal College with the hope of holding onto the two-point lead switched into full court man-to-man defence forcing more turnovers on the opposition. Even though STC couldn’t score as they wished, they made sure the path to points for RC was as tough as it was for them. S. Thomas` managed to lead the game off one point 22-21 going into lemons, as they kept Rukshan Atapattu away from the paint. Atapattu only managed to score a couple of points during the quarter.

S. Thomas` College lacked rebounds which cut off their second chance points and blocked their pathway off to leading the game at half time.

It was any one`s game to take back home and it was crucial that both teams had the right mindset to outsmart each other in the third quarter. The Thomians looked more organized in both offensive and defensive aspects, converting the opposition turnovers into points at the other end. The ploy they missed out during the first half of the game.

Both sides had their own version of unforced errors when it came to the offence. It was the defence which was going to create the difference. RC adapting to the game situation hastily switched into a man-to-man defence which blew right in-front of the STC offense. STC led the game but after the defensive strategies were changed. Royal College closed down the quarter swapping the lead back to their side, 32-31.

The game went right down to the final six hundred seconds with the lead swapping back and forth. Royal College lost both their experienced campaigners Rukshan Atapattu and Tharindu Balasooriya as they fouled out.

Royal College did well to keep the lead on their side after losing a couple of their key assets. RC led the game by five points with a minute remaining on the clock. Even though S. Thomas` College did keep half step back in the game reducing the deficit just to a couple of points, time was not in their favour.

As the final whistle was heard the score board stood at 44-42, Royal College winning the 14th edition and lifting up the D.S. Senanayake Challenge Trophy.