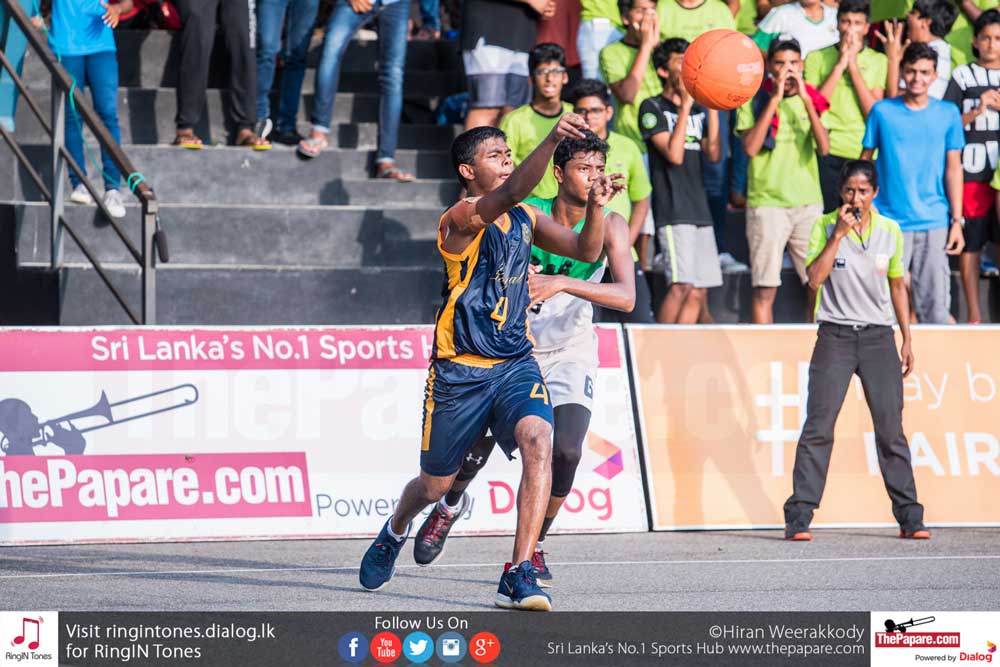 As ThePapare Basketball Championship 2017 wound down, AIS played Royal College in the first semi-final of the tournament. Royal College came from behind to clinch the close encounter, winning by just one point.

AIS Coach: “Both teams are equally matched and the winner will depend on who performs better during the 40 minutes.”

Royal College Coach: “Both teams are well matched it’s going to be a tough game since they have a very strong post defense so we’ll have to score mainly from the perimeter.”

Royal College took first possession of the ball but it was almost immediately turned over as AIS took the first shot of the game. AIS followed it up with a tight zone defense, forcing the Royalists to take shots from outside and making scoring a difficult task for them. Royal employed an equally tight defense, marking Brent Thevakumar and guarding the AIS skipper closely and giving him no room to take a shot. AIS managed to take a small lead at the end of the first quarter thanks to their strong defense.

During the second quarter Rukshan Attapattu who had been one of the key players from RC to keep scored from downtown and while RC struggled to penetrate the defense, they evened things out from shots beyond the perimeter. AIS had an edge when it came to rebounds and scored a majority of their points from second shot opportunities, allowing them to regain the lead towards the latter part of the quarter.

Brent Thevakumar was the key offensive player for AIS as his speed and agility allowed him to get past the RC defense and finish strong near the rim while the Royalists lost possession of the ball on a few occasions due to bad passes and continued to trail behind AIS. The Royalists saw their chance to make a comeback when Brent was taken out for the rest of the third quarter due to an injury and managed to secure a majority of the rebounds during this time to reduce the deficit greatly.

The final quarter of the game witnessed a stunning comeback by Royal College as AIS began to miss their jump shots and the Royalists tied the game in the first few minutes of the quarter. Rukshan Attapattu carried his team on his shoulders in both offense and defense, turning the game around. As control of the game went back and forth a clear winner could not be predicted during the final few minutes. With 30 seconds to go Royal College College took the lead by 1 and switched to a full-court press adding pressure on AIS which allowed them to seal their victory and a spot in the finals.

Speaking to Rukshan Attapattu after the match he had this to say to ThePapare, “It was a close match but we had a better and more balanced team which is what helped us during the final moments of the game to win it.”

The coach of the Royal College team had this to say about the match, “We surprised them with a pressure defense in the second half and it was something they hadn’t prepared for which is what helped us turn the game around during the second half.”