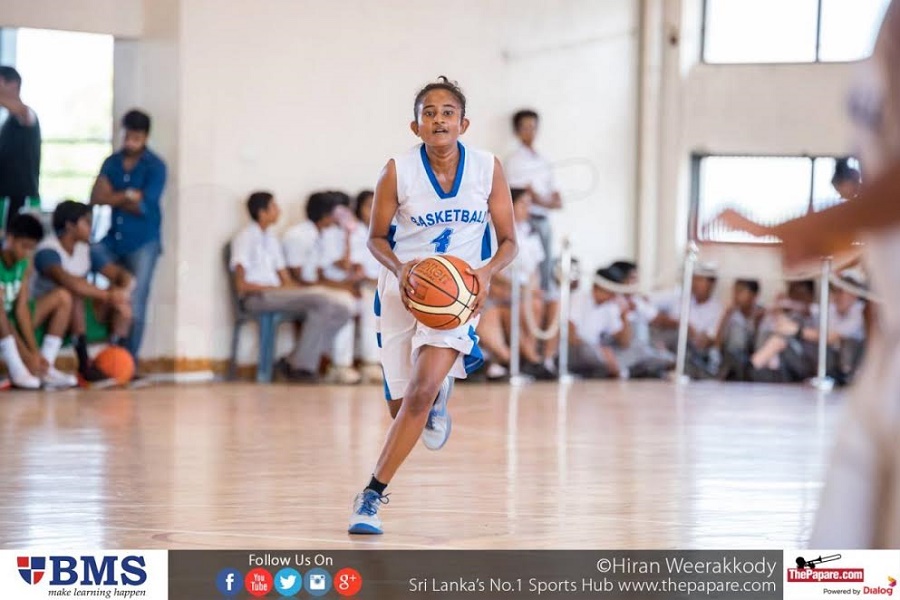 ThePapare.com extending its search radius to the younger age groups unearthed Hazeena Abdul the PodiPapare, personality of the month, a budding talent versatile in both Basketball and Netball.

“It was athletics, where my heart stopped at first. Basketball was for my sister but I used to watch her play and practice after school. When they play matches, during the half-time break I used to go to the court and just engage in the sport with my cousin brother and it happened; a change of heart”.

A change of heart can work two ways; painful or sometimes it paves the way to further success. For Hazeena Abdul it was the latter. She was awarded the Most Valuable player of the recently concluded U17 inter-international basketball tournament and has become the center cog of her team with an uncontestable future in the sport.  This is her story.

Q: How is the support from your family?

Q: Let`s talk about the balance between studies and sports. How do you do it?

During my ordinary level examinations, I had a matches going on.  The school and the teachers helped me a lot. Whenever I miss lessons they had afternoon classes for me and the Principal was very supportive during those times.

I don’t have time to come home and study in the afternoon because its late when I come back home. So I wake up in the morning at 3.00 am and then study. That is how I balance sports and studies.

Q: How is your daily practice schedule?

We have practices on Wednesday, Friday and morning practices on Tuesday, Thursday. Sometimes we also have practices on Saturday. The different days are divided into different sessions about defense, ball handling, shooting and match situation. Also before the practices we play one-on-one with rest of the team mates and I practice shooting three-pointers and layups.

Q:  Before a match and during the march what are the steps you follow to handle pressure and keep your focus in the game?

First I think about the match; how am I going to play and what will be my tactics to counter the opposition. If I have played matches before with the same opposition, then I analyze them and do my homework about the weak points and change my game plan accordingly.

Q: Tell us about an unforgettable moment you have experienced during your school career.

Then during the group stage matches we lost to Gateway College by seven points and then coming into the final it was challenge since we were playing with the absence of one key player. But within the team we had that’ we should win’ attitude. I was also awarded the most valuable player of the same tournament after we were crowned champions.

Q: Who are the toughest teams and players you have competed against?

Toughest player that I have played against, well I guess its Nirma Sasanthi from Good Shepherd Convent – Kotahena. She is indeed a tough customer to play against.

Teams wise, the U19 team of Good Shepherded Convent – Kotahena. Then the St. Joseph`s Girls School Nuegegoda used to be a tough team but now I guess Gateway College, Rajagirya has too come up the ranks and has transformed to a tough competitor.

Q: Who is your role model in the game, both locally and internationally?

There is no such role model that I follow. I want to be who I am and play the best in me. Erm, internationally though, I think I love how Michael Jordan plays and I admire his playing tactics.

Q: What are your future plans in Basketball?

After my school career ends I have plans to do CIMA as my higher studies. So while doing CIMA I would like to join a bank and play for the mercantile sector. While playing for the mercantile sector I also want to join a club and continue playing there as well. As every player dreams of I also have the end goal set to represent my country and play for the national team.

Q: Apart from basketball, what other interests do you have?

Apart from basketball I also represent Lyceum International School, Wattala in athletics and netball. In-fact, athletics was my first sport. In netball, I have become the netball queen thrice in the inter-international netball championship and we have been crowned champions a number of times.

Q: Where does Sri Lanka basketball stand as you see it? What would you say to someone starting out?

Sri Lanka basketball is improving but I see a few drawbacks in team selection. They sometimes do favoritisms which I believe is not the legit way. I feel they don’t use the real talent but depending on personal connections decisions are being taken. So I think they should adapt due process so that it would benefit both the sport and the player.

For someone whose starting out, when doing sports, you might come through ups and downs but that does not mean that you won`t be able to pursue your sport or achieve the highest possible achievement. So you need to learn to accept both in good faith and do what you already do with dedication and commitment. Always when you lose don`t get demotivated but make it a point to play harder.

Q: Anyone to thank?

I would like to thank my school, Lyceum International School, Wattala. The faculties and services that the school gives us from recognizing our talent and motivating us to win matches, is excellent. I would also like to thank my parents, if they weren`t behind me I wouldn’t be who I am today. I would like to thank my coaches, teacher-in-charge because they are the second reason why I am here today. Finally, to my wonderful team for being supportive and always having having my back.

ThePapare.com wishes Hazeena Abdul best of luck to keep doing what she does, the best!