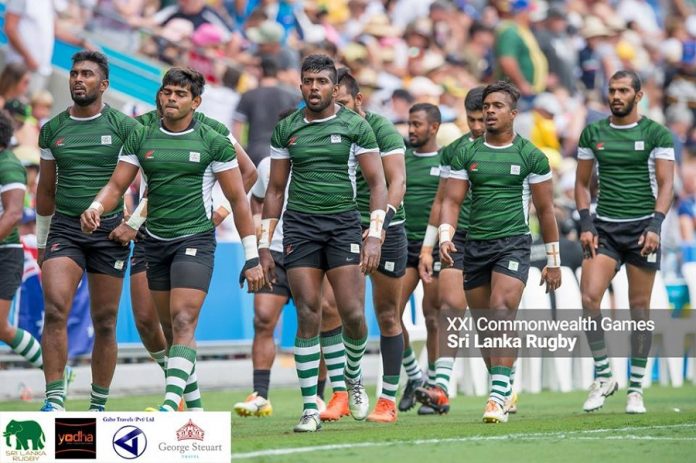 The Tuskers 7s team, led by Sudharshana Muthuthantri may have crashed out of the Commonwealth games sevens without picking up a win, but they certainly gave us fans a lot to talk about.

Sri Lanka went up against two of the best teams in the world in Fiji and Wales along with Uganda who are currently ranked 17th in the world. They displayed some great potential and played with the kind of grit that would make any Sri Lankan supporter proud.

Sri Lanka started their campaign well when Danushka Ranjan found Fiji napping, slid through a hole in the defense and showed a clean pair of heels to score the opening try within the first two minutes, a feat he would repeat in all three games. Over the course of the first half, Sri Lanka may have conceded 4 tries, however, their structure in attack must be commended. Coach Peter Woods had clearly set up a smart game plan, and the team executed it well staying out of a contact battle while not fearing it. They were more than willing to take the contact and recycle possession when they had to and were rarely overpowered around the breakdowns area. Sri Lanka even went as far as to set up 9 good phases and create a 2 on 3 overlap but unfortunately decided to go up the middle instead of using the extra man out-wide.

Another important facet the Tuskers seem to have improved is their composure, they didn’t try to force the play and score of the first phase, and they certainly didn’t panic when the breaks didn’t come, they simply settled, recycled and tried again. The decision making on the field however was not brilliant, the Tuskers were patient and waited for the opportunities, the problem is, against world class defense you need to create those chances with changes in running lines, subtle variations in speed and when the breaks do come, the support play has got to be immaculate. On one occasion Dhanushka Ranjan was set up in space on the flank, unfortunately he didn’t have the gas to finish it off and lacked any support once he had broken the line. He was tracked down by 3 Fijians and was completely isolated. Sri Lanka’s work rate off the ball was very poor in both attack and defense. When facing an opponent like Fiji you can’t afford to not drop back for the passes and you certainly cannot afford to not follow up in support of a line break.

The second half against Fiji was a totally different ball game, the Olympic champions and eventual CWG silver medalists sliced through the tired Tuskers like a knife through butter. The Fijians were ruthless in defense putting on some monstrous hits on the much smaller Sri Lankans and eventually added 5 tries to their 4 from the first period. However, from Sri Lanka’s point of view they can take heart in the fact that they really tested the Fijians throughout the 14 minutes of play.

In the second game Sri Lanka started well as they did in the first and opened the scoring with a coast to coast try running it in from their own in goal area. Although Ranjan scored the try after beating his opposite number on the outside it is the build up to the try that was most encouraging. Firstly, Sudam Suriyarachchi, chased down Luke Morganand made a

try saving tackle on the corner flag. Next Sri Lanka claimed the line-out on their 5m line and Tharinda Ratwatte carved through the Welsh defense from inside the in-goal area and then looked-for support which came from Richard Dharmapala who also had the presence of mind to make an off-load from the deck after being ankle tapped. Dharmapala’s offload to Suriyarachchi kept Wales on the back-foot and once Suriyarachchi got the ball to Ranjan, he beat his defender on the outside and sprinted under the post to give Sri Lanka a phenomenal 7-point lead inside 2 minutes. Unfortunately for Sri Lankan fans, the Tuskers were unable to follow up their excellent all-round play in the next 5 minutes of the half as they struggled to get back behind the ball in defense and repeatedly slipped off tackles which enabled Wales to run in 4 tries. Sri Lanka had one more opportunity to attack on the stroke of half time, when Dhanushka Ranjan had an extra man outside him, but instead of passing he decided to try and go it alone and wound up coughing up the ball, which resulted in Wales running in their 4th try.

The Tuskers started the second half brilliantly, this time Kavindu Perera effecting a try saving tackle on the 22 and from the resulting line-out, Richard Dharmapala stepped in from centerfield and put Sooriyabandara into space and he danced his way around the sweeper and had the pace to go all the way. Following the try however, Sri Lanka’s inexperience in the professional game began to show when they didn’t take the conversion in the allotted 30 secs which left the score at 28-12.

Once again Sri Lanka began to show fatigue in the last 2 minutes which resulted in Wales running in two more tries to end the game 42-12 which was not a reflection on how well Sri Lanka played. The Tuskers were physical in defense and made very few errors in attack but were simply out-matched and thrown off a few tackles and had a few decisions go against them which seemed to demoralize them. The lack of experience at a highest level was clear in this game as they were just unable to close the game out strong. They showed glimmers of promise but were simply unable to sustain that pressure over 14 minutes.

In their 3rd and final game against Uganada, Sri Lanka seemed to be burnt out, both mentally and physically. They went in to the game having played out of their skins against both Wales and Fiji and they had certainly tested the top sides more than the Ugandans had done earlier in the day.

The Tuskers started the game like they did the 2 previous, firstly Muthuthanthri showing great strength to hold up Suriyaarachchi over his head to claim the kick off and a few phases later Ranjan picked up off the base of ruck, beat 2 defenders and sprinted over for his 3rd try of the tournament. Having started well Sri Lanka needed to keep their composure and build on the early lead, unfortunately they seemed to go to sleep for a couple of minutes instead and conceded 12 points. They eventually fought their way back, capitalizing on several penalties and a Muthuthantri break on the right flank set up some space for Ranjan on the left flank which he used to dot down his 2nd in the game. In the second half however, Sri Lanka fell apart, they slipped off tackles, missed lineouts and dropped passes and conceded 3 tries which resulted in a 33-10 loss.

Rookie mistakes- The Tuskers made far too many basic errors throughout the tournament. Firstly, on numerous occasions they failed to use the extra man out wide. Additionally, crooked throws in lineouts, allowing the conversion time to expire and being in front of the kicker at kick-offs are cardinal errors that Sri Lanka must stamp out going forward.

Kick-off– The lack of height was very clear across all three games for Sri Lanka, they struggled to retain possession which set the tone for the rest of the game. Coach Woods clearly had a plan with the pods set up to compete in the air and it did work a few times, but Sri Lanka often coughed up possession.

Dhanushka Ranjan- Ranjan was lethal on the wing with the ball in hand and he ran in 4 excellent tries, two of which were total individual brilliance. Unfortunately, the rest of his game was below average. On more than one occasion he made the wrong decision opting to run instead of pass which resulted in turnovers. With his size, speed and footwork he would be a devastating player if he could start creating space for the rest of his teammates. Furthermore, he was mediocre defensively, allowing several attackers to run untouched while his work rate off the ball was virtually nonexistent. He is without a doubt an exceptional player and Sri Lanka is lucky to have him, but the coaching staff needs to work with him on the rest of his game if they are to turn him into a complete sevens package.

Conditioning- One of the areas where Sri Lanka was extremely exposed was in the dying stages of every game, after battling for 12 minutes they conceded 2 or more tries in the last 2 minutes of every game. This is a result of a lack of mental and physical conditioning. When the Tuskers start to tire, they start to fall off tackles, and make silly mistakes. The coaching staff need to work on increasing the fitness levels whilst also training them to deal with the fatigue and remaining focused when the lungs are burning.

Little men big hearts– At the end of the day, the entire Sri Lankan team played with a lot of heart and even though the score lines may not reflect it, they tested all three of their opponents and made them work for their wins. They put their bodies on the line and made last ditch tackles and fought with every ounce of energy they had.

The opportunity to play against the best in the world would have certainly given Sri Lanka some much- needed exposure. With a big year of sevens rugby coming up hopefully Sri Lanka can continue to grow and win some silverware and more importantly take a step towards the top in Asia.