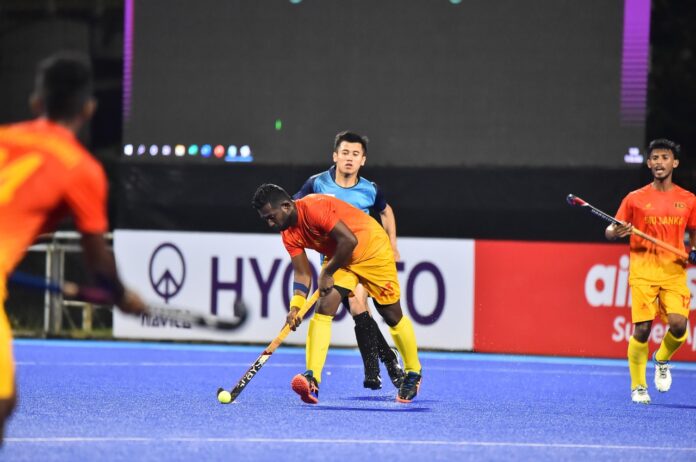 Sri Lanka’s hopes of making the Hockey Asia Cup 2022 were shattered, as the Lankan stickers lost a thrilling game to Oman in the semifinals of the 2022 Men’s Asian Hockey Federation Cup (AHF Cup).

The crucial semifinals were held today (19) at the GBK Hockey Field in Jakarta between Sri Lanka-Oman and Bangladesh- Kazakhstan. Apart from deciding a seat at the final of the AHF Cup 2022, these matches were extra special since the winners of the semifinals would qualify for the 2022 Asia Cup.

Sri Lanka team was always chasing in the game from the start as the Oman players attacked aggressively and earned a controversial penalty call in the first half. Al Fazari Rashad successfully completed the penalty shot, putting Oman ahead of the game.

Just a minute after the start of the 2nd half, Al Nasseri Ashraf made a brilliant strike to make it 2-0, but Sri Lanka managed to respond with a successful penalty corner by Suresh Rathnayake. However, both teams failed to add to the scorecard, confirming Oman’s spot in the final of AHF Cup 2022.

In the 2nd semifinal, Bangladesh defeat Kazakhstan 8-1 and they will be eyeing their 4th consecutive Men’s AHF Cup title tomorrow. Finalists Bangladesh and Oman will join India, Pakistan, Japan, South Korea, Malaysia and host Indonesia in the 2022 Asia Cup, which will be held from 23 May – 1 June in Jakarta.

Sri Lanka will be facing Kazakhstan tomorrow for the 3rd place decider. Earlier this week, the Lankans managed to top their group by beating Uzbekistan (0-5), Thailand (2-6) and Kazakhstan (0-4).