This week on Swishing the Nets – Basketball in 05 mins, we explore the life of a sports-woman who has represented the paradise island in two sports while also being crowned Miss. Sri Lanka in 2013, Solange Gunawijaya.

In the recently concluded, MSBA Knockout Tournament 2018, Solange was awarded MVP of the finals, where her team, Commercial Credit went onto win the “A” Division title. This was not the first time Solange was given an MVP award.

Solange has donned the national jersey in both basketball and netball, representing the island-nation internationally. Apart from being a tough lass who plays one of the world`s fastest games, Solange contested the Miss. Earth competition after being crowned Miss. Sri Lanka in 2013.

Two sports, modelling, life. How does she balance this triple threat?

We asked her, below are the excerpts.

Q: You commenced your sporting career as a netball player, then you took on basketball. How did the switch happen? 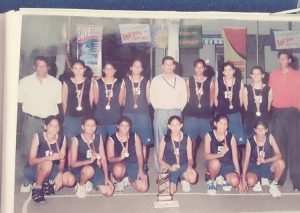 Well talking about netball, it was my first sport. I started playing netball when I was in grade 02. It was not a surprising reason, I got into netball because of my height. My first netball tournament was the Milo Cup which I played in 2003.

Time passed by and I was engaged in netball, then one day, Sir Ajith Kuruppu saw me and asked me whether I would like to play basketball. My mother also liked basketball so with that backing I started playing. When I was in school, I represented both the netball and basketball teams but basketball is a faster paced game than netball so I guess that is why I am engaged more in basketball. 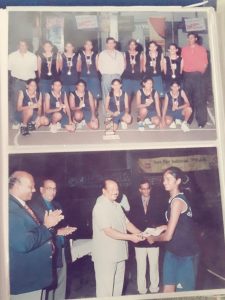 Q: After you began playing basketball in 2003, while in school you represented the national team in 2005. Let`s talk about the highlights of your basketball career since then.

Well, I never expected to be selected for the national team in 2005. I was 14 years old back then, in grade 08. From my debut, up-to now I have represented the country in around 10 FIBA Asia Championships. Experience-wise, I believe it`s the dream of every basketball player to represent your country at a FIBA event. I have had that privilege since I was 14 years old.

I am also privileged to represent Sri Lanka in the 3×3 format. I first represented Sri Lanka for the South Asian Games which was played in Sri Lanka and where we also won a bronze medal.

Q: 2009, your final year in school was a special year for you. Walk us through the memories.

Q: In 2008, when practicing for the Youth Asian Netball Championship you injured your knee. It did not stop you from engaging in the sport. How was the recovery process and how do you still manage to play in the international arena despite the injury? 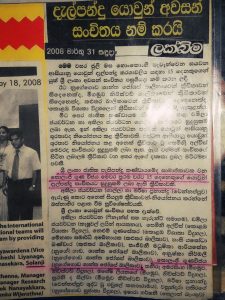 Just like 2009 was the golden era, 2008 was the darkest era. I was at my peak, practicing for the Youth Netball Championship which was supposed to be held in Hong-Kong. But unfortunately, I injured my knee and I was left behind, which I did not expect to happen since I was at my peak playing the best netball I could at that time but the injury took over and I had to stay back.

I had to undergo a couple of surgeries and the medical advice was I had to choose between the two sports with the condition of my knee. I went on to choose basketball and I am playing it while managing my injury.

Q: Miss. Sri Lanka in 2013, sports and modelling, how do you balance things?

For a sports-woman like me, modeling or being a beauty queen was never in the cards. It was my sister and my mother who had applied for this pageant. I won an award at the National Sports Festival so firstly, I thought it was a TV interview for that. They called me for an audition, I didn`t know but I went. Eventually I won the Miss. Sri Lanka title in 2013.

It was the first time in Sri Lanka where a sports-woman was crowned with the title. I was privileged to have had been crowned. After that incident, I followed modelling a bit more where I participated in the Colombo Fashion week and many more pageants.

It is quite tough to balance, I remember while I was part of the Miss. Sri Lanka competition, in the morning I went for pageantry practices and the evening I was playing basketball. It`s hard but so far I have been doing well.

Q: You have represented Sri Lanka internationally in basketball for a while now. Where do you see the standards of Sri Lanka Basketball at?

Well in terms of 5on5, Sri Lanka has a huge disadvantage to do with height. For us to be better in the aspects of the game such as; speed, agility, team-combination, strength and conditioning we need to have a long-term plan, at least, a 06 month or a one-year practice schedule so that we could improve our game-play.

In 3×3, we are among the top 10 countries in Asia. Sri Lanka has a good future in that format but we need to be consistent.

Well sport is my life, modelling is my passion. Number 01 would go to basketball, number 02 would be netball and the third spot will be given to modelling.

During her journey her netball coaches, Desima Fernando, Trixi Nanayakkara and her basketball coaches, Ajith Kuruppu and Sivashakthi Selvaraja, guided her through every step.