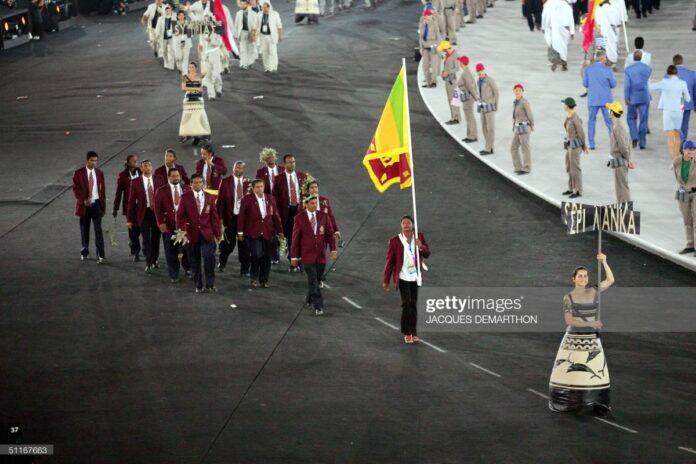 Sri Lanka Athletics celebrates its centenary this weekend, having joined the International Amateur Athletics Federation on 18 January 1922, making it one of the oldest federations in Asia. But the origins of athletics in the country can be traced back a further 64 years.

The first athletics meeting is recorded as having taken place from 9-11 June 1868 in Kandy at the picturesque setting of the Rifle Esplanade by the Kandy Lake which, as the name implies, was more usually employed for military training.

Contemporary accounts are sketchy, but it is believed that the meeting was inspired by the growth of athletics clubs back in the colonial motherland England and the concept of the meeting had no problem gaining the patronage of the Governor of Ceylon, Hercules Robinson, who had been an active sportsman in his earlier years in the military.

Robinson certainly had a genuine interest in athletics, and it is notable that 10 years after he had moved on to become Governor of New South Wales, Robinson became the patron – the president in current vocabulary – when the Sydney University Athletics Club was established in 1878, making it one of the oldest clubs in Australia.

The events contested in that meeting in Kandy are not fully known, but they would have inevitably included participants from what were called the ‘ABC’ – athletics, boating and cricket – clubs in the area which had been set up by the predominantly British planters and colonial armed forces based at the local garrison.

Athletics meetings then slowly grew popular with the colonial population as the sport gained a wider appeal in many countries.

Milestones before the turn of the century included the first school inter-house athletics meeting at Trinity College, Kandy, in August 1883 and the Ceylon Amateur Athletics Association – which became affiliated to the Amateur Athletic Association of England – was created in May 1896.

The ­first inter-schools athletics meeting was held at Havelock racecourse in Colombo on 24 May 1906, with the competition grandly named the ‘Empire Games Schools Championships’.

Athletics meetings were almost exclusively organised for the expatriate community and to the exclusion of the local population prior to World War I. However, as sports activities resumed in Ceylon after the Great War, the doors finally opened wider.

The first National Athletics Championships was held on 23-24 September 1921 at Ceylonese Rugby and Football Club Grounds in Colombo and these championships provided the catalyst for the Ceylon AAA to formally affiliate to what was then the IAAF less than four months later.

With Ceylon still under British colonial rule, there was no chance for it to enter teams under its own flag at the Olympics but high jumper Carl van Geyzel, who was also a top-class cricketer and later became the Ceylon AAA president from 1952-66, represented Great Britain at the 1928 Olympics Games.

Although Geyzel was far from his best in Amsterdam and he failed to make the final, his 1925 personal best of 1.90m was to remain the Ceylon national record well for more than 25 years.

Just five months after independence, Ceylon athletes finally competed under their own flag at the London 1948 Olympic Games and the occasion was marked by Duncan White winning the silver medal in the 400m hurdles.

White was still at school when he competed in the 1938 British Empire Games and made the 220 yards hurdles semifinals. A decade later in London, despite only having returned to training for the event for about three months after having been a serving officer in the Ceylon Light Infantry between 1942 and 1947 and fighting in World War II, he took the silver medal with 51.8, having led until the seventh hurdle.

Two years later, White was to get Ceylon’s only gold medal at the 1950 British Empire Games when he won the 400m hurdles in a Games record of 52.8.

However, White’s impressive feats did not precipitate an upsurge in athletics achievements.

At the inaugural Asian Games in 1951, with White having retired from competitive athletics, Ceylon took a solitary silver medal thanks to M A Akbar in the pole vault.

On a continental level over the next four decades, Ceylon – which changed its name to Sri Lanka in 1972 upon becoming a republic – had sporadic success, with occasional bright spots such as Nagalingam Ethirveerasingham winning the 1958 Asian Games title, the country’s first in any sport at the Games with a leap of 2.03m.

Lucien Rosa, running barefoot, took a memorable 5000m and 10,000m double at the 1970 Asian Games in Bangkok and his personal best in the longer event of 29:18.0 in 1975 remains the Sri Lankan record to this day, more than 46 years later. Wickramesinghe Wimaladasa won the 400m four years later in Tehran but medals, particularly those of a golden hue, remained few and far between.

The advent of the South Asian Federation Games in 1984, and some radical restructuring of many sports federations in the wake of a dismal 1982 Asian Games in Delhi when the country failed to win a medal in any sport, gave Sri Lankan athletes improved opportunities on a regional level, with athletes winning five of the country’s seven gold medals – all in the sprints – across all sports at the first edition of these Games.

At the 1991 South Asian Federation Games on home soil in the country’s capital Colombo, Sri Lankan athletes took no less than 15 athletics titles.

Notable athletes of the 1990s include 1998 Asian Games and Championships 400m winner Sugath Thilakaratne, whose time of 44.61 when winning the latter title in Fukuoka, Japan, moved him up to second on the Asian all-time list and he still is sixth on the continental charts.

Sprinting to the fore

At the same championships, Damayanthi Darsha came to the fore.

Having been just 17 when she competed at the 1992 Olympic Games, as the youngest Sri Lankan athlete ever to have represented her country at the Olympics, she matured into a formidable sprinter and won 200m and 400m gold medals at the Asian Games in Bangkok and the longer sprint in Fukuoka.

Darsha was the Sri Lankan flag bearer during the opening ceremony of the Sydney 2000 Olympic Games, and she went on to win three further Asian Championships titles in 2000 and 2005 – taking the 200m and 400m gold medals at the former and 200m at the latter.

However, the most successful Sri Lankan athlete of the last 50 years has been, without doubt, the sprinter Susanthika Jayasinghe.

Jayasinghe, who hailed from a poor family and joined the army at 16 in order to further her athletics career, broke through at the age of 19 when she won the 1994 Asian Games 200m silver medal.

The following year, she took gold over the same distance at the Asian Championships and in 1997 she won her first of three medals on the global stage when she finished second over 200m at the 1997 World Athletics Championships.

Further success was to follow in 2000 when she won the 200m silver medal at the Sydney 2000 Olympic Games – having initially been third across the line but promoted by a place after the doping disqualification of the disgraced Marion Jones – the first South Asian athlete to stand on an Olympic podium since Duncan White.

She was Sri Lanka’s flag bearer at the 2004 Olympic Games but injuries, which were to plague her for much of the next two years, hindered any chance of further success.

However, 100m and 200m gold medals at the 2007 Asian Championships foretold that she was close to being back to her best form and a month later she was to finish third in the World Athletics Championships 200m.

After a career lasting almost two decades and having been her country’s flag bearer again at the 2008 Olympic Games, Jayasinghe brought the curtain down on her career and announced her retirement on 5 February 2009.

Presently, the best Sri Lankan athletes look someway short of emulating Jayasinghe, but encouragingly there were a spate of national records in 2021.

Among them, US collegian Ushan Thiwanka Perera moved the men’s high jump record up to 2.30m, while in the women’s events Gayanthika Artigala ran 4:09.12 for the 1500m and long jumper Sarangi Silva reached 6.48m at the national championships in October.

Further improvements could see this trio flying the flag for Sri Lanka at this summer’s World Athletics Championships in Oregon and, perhaps, being in contention for medals at the Commonwealth Games and Asian Games that follow.