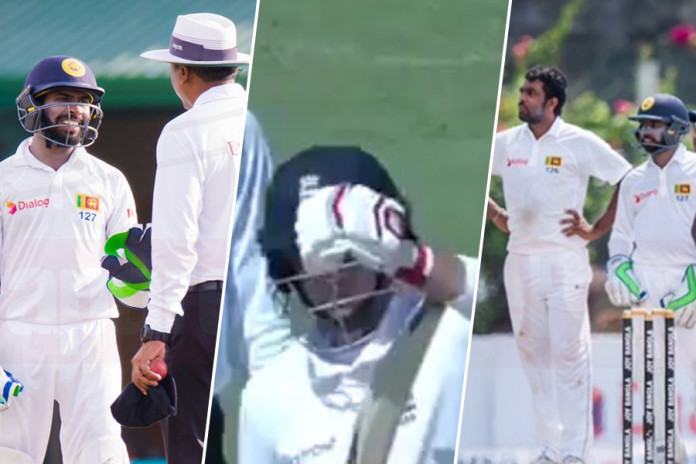 The Decision Review System(abbreviated as DRS) is a technology-based system used during a game of cricket.

The system was first introduced in the longest format, for the sole purpose of reviewing decisions in order to give a batsman out, where split-second timing often leaves an umpire in a very difficult situation. Sri Lanka’s use of DRS has been talked about and in this article we attempt to delve into some interesting stats of the island-nation’s run with DRS.

The system was tested in an India v Sri Lanka test series in 2008, before it was officially launched by the International Cricket Council(ICC) on the 24th of November in 2009 during the first Test match between New Zealand and Pakistan  at the University Oval in Dunedin at which point the ICC made it mandatory.

However, in the test series vs India, Sri Lanka had 11 decisions overturned in their favor compared to India’s 1 and India refused to budge on their reluctance to use DRS. Therefore the ICC had no option but to go back on their ‘DRS mandatory in all international matches’ to making it optional if both teams agree.

In September 2013, the rules were amended to allow teams to reset their review counts after 80 overs in test match cricket. And in September 2016, the ruling on DRS was changed to widen the frame of contact between ball and stump in lbw out decisions. And eventually a month after this, India agreed to use the system.

Over time the teams have developed a method over using DRS and the table below shows how DRS has affected the game of cricket since it’s introduction in the year 2009. It gives a good indication that the players have got better at using it with overturns per match improving from 2.4 to 4.0.

Sri Lanka has a success rate of 25% in overturning decisions which ranks them among the lower half of test playing nations using the DRS, but we need to keep in mind that Zimbabwe, India and Bangladesh have hardly used this system(indicated by ‘*’). 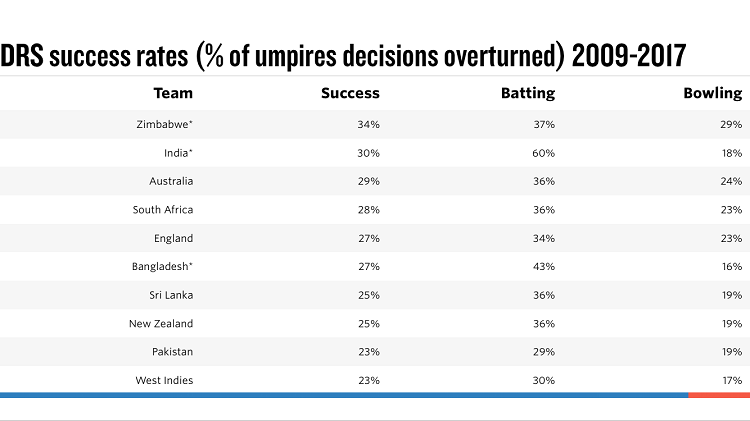 Interestingly the batsman with the most number of reviews from Sri Lanka is Rangana Herath. The overall success rate for a review by a batsman is 34% and Herath’s 38% isn’t a too bad when you compare the percentages.  Meanwhile Dimuth Karunaratne has been subjected to 11 bowling reviews but surprisingly none of them were overturned. 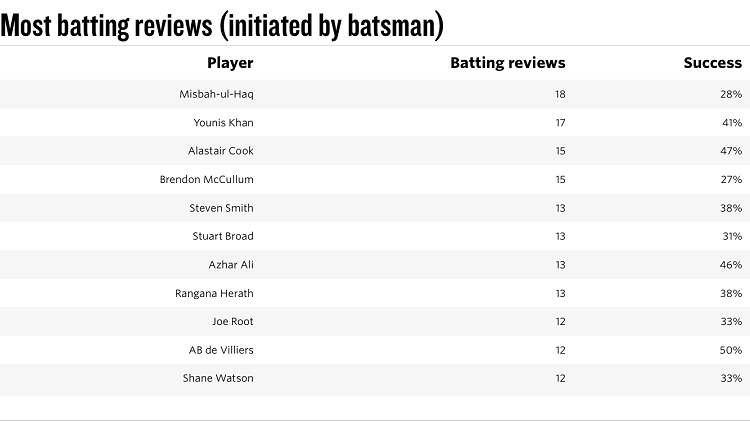 When it comes to bowling reviews, it’s Rangana Herath leading the number of reviews by quite a distance once again. This time he not only has the most number of reviews by a bowler for Sri Lanka, but he’s also the bowler with the most frequent use of DRS in the world. But one thing we need to keep in mind is that bowling reviews are usually asked for, after a discussion and the captain is the only man with the authority to use it from the fielding side. Therefore it’s not always fair to blame the bowler if a review is unsuccessful.

Herath has used the Decision Review System as a bowler on 60 occasions and he has a success rate of 20% which means only 12 of his reviews have been overturned.  Having said that, the overall success rate for a bowler is also 20% indicating that Herath’s use of DRS hasn’t been too bad. 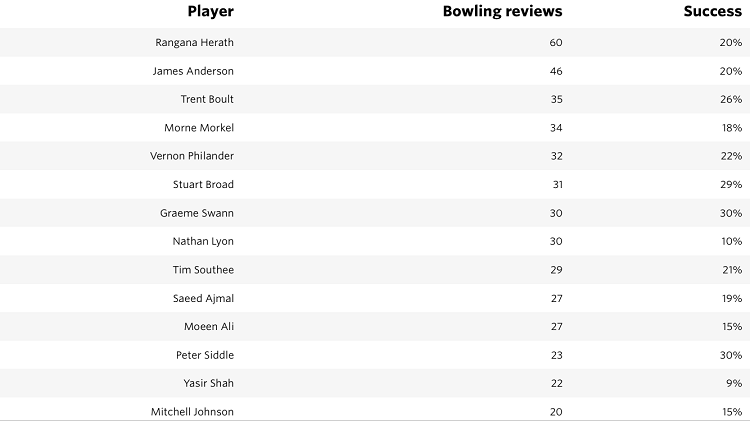 Sri Lanka haven’t had many test match umpires in the recent past. Kumar Dharmasena has obviously been the standout umpire – even being awarded the ICC umpire of the year – but surprisingly his decisions have been overturned up to 25.8%In comparison with the other top umpires in the world, Dharmasena is ranked 10th in the world while his decisions have been reviewed 5.39 times per test. 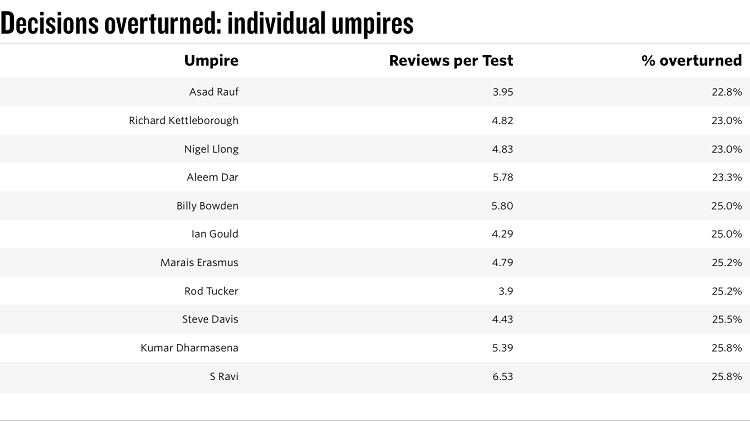 The Decision Review System in Sri Lanka has not had all the available facilities due to most of it being very expensive technologies. For example a feature like hot spot where it would make it easier to detect if the ball had contact with the bat hasn’t ever been used in Sri Lanka.

Changes in the DRS has happened throughout the years and the ICC has a few new changes coming up in the near future.

An umpire’s call finding on a review may soon not cost teams a review. The ICC cricket committee, headed by India coach Anil Kumble, recommended that teams do not lose reviews in those instances where an umpire’s call comes into play. And if the ICC chief executives’ committee approves it, the change could come into effect this October.

Currently, sides are allowed two unsuccessful reviews in the first 80 overs of a Test innings, and one per innings in ODIs. If a review is successful, they do not lose it.

However, DRS has had a clear positive impact on cricket with more correct decisions being made, but the ICC is still not sure of the the exact rules that they need to stick with. The Sri Lankans will  need to work on their use of DRS and especially improve the reviews being used while they are on the field.