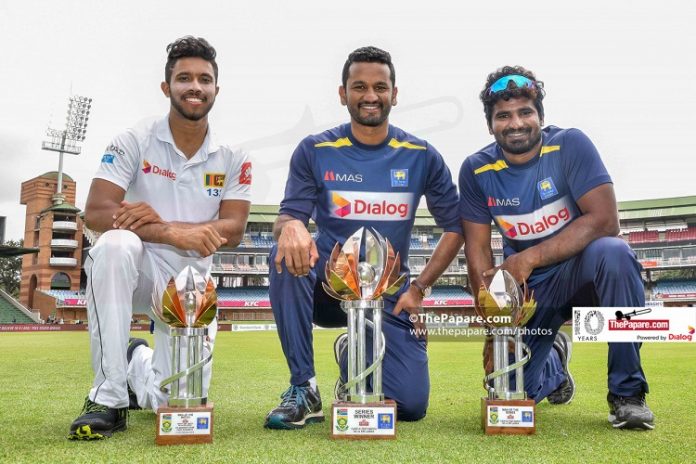 USSR winning the Olympic basketball gold over USA in the 1972 Munich Olympics, Buster Douglas knocking out Mike Tyson in the 1990 Heavyweight Championship bout and John McEnroe beating Bjon Borg in the 1981 Wimbledon final are some of biggest upsets in sports. Sporting historians will add Sri Lanka beating South Africa to become only third nation to win a series here to the list as well down the line.

What an incredible two weeks this has been for Sri Lankan cricket! It was far-fetched to hope that Sri Lanka would win any contest against their South African counterparts leave alone the series. This is not real. You are still pinching yourself to see whether all this is a dream.

But it has happened. Sri Lanka have managed to find a way to get past South Africa and all players and support staff who were involved in this win will remember it for the rest of their lives.

Kudos to the national selection panel headed by Ashantha De Mel for some tough decisions. The selectors didn’t have many admirers when they made swooping changes after the humbling experience in Australia. But they have been proven right.

They saw something special in Oshada Fernando, a talent that was untapped as he had not featured in ‘A’ team cricket or the Under-19 team. He was not someone who was in the system. Once, SLC identifies a player, he is drafted into the High Performance Center at R. Premadasa Stadium where he follows a schedule and gets under the guidance of some of the finest cricket brains in the country from Roy Dias to Sumithra Warnakulasuriya.

Very few had heard about Oshada until his debut in Durban. His counterattack of Keshav Maharaj in the second Test on day three with the game evenly poised proved to be a huge turning point. Oshada and Kusal Mendis had seen off the threat of South African fast bowlers and it was the kind of wicket where Maharaj could have run through the side. With Oshada stepping out and lofting the left-arm spinner over his head, Francois Du Plessis could no more attack and was forced to spread the field and the Sri Lankans were happy to milk the bowling from thereon.

Lasith Embuldeniya, another debutant, impressed. The call to drop Dilruwan Perera looked harsh as he was world’s second highest wicket taker in 2018. But most of Dilruwan’s heroics had come at home last year and it was felt that the time was ideal to blood someone new and Embuldeniya made an impact and was impressive.

Kusal Perera perhaps played the innings of his life and it will be ranked alongside some of the finest innings played by his compatriots over the last 37 years of Test cricket.

Many would prefer the win over England in 1998 as Sri Lanka’s greatest, but not anymore. This series win came against many odds and has to be ranked as the best.

The quality of cricket in 1998 was top class. There was a double hundred, there was another 150 plus score and one bowler claiming 16 wickets. The individual performances stood out. That was a star studded Sri Lankan side. The present team had no stars and missed many other leading contenders due to injury but the belief helped them to turn the tables on a fancied South African side.

The seamers have been top class. Both Kasun Rajitha and Vishwa Fernando wouldn’t have featured in the series had the other bowlers been fit? Vishwa in fact was dropped from the CCC side this season. But their effort to outclass Dale Steyn and Kagiso Rabada was sensational as both bowlers claimed more wickets than the South African duo. The Sri Lankans pace was nowhere near to that of the Proteas. But the difference was Rajitha, Vishwa and Suranga Lakmal were on the money, all the time.

Sri Lanka were virtually left with ten players after Embuldeniya was injured on day one in Port Elizabeth. Dhananjaya de Silva rose to the occasion admirably claiming five wickets and moving forward his bowling option will be valued and he would add balance to the side.

How good was Kusal Mendis’ effort with the bat when 137 was needed to win on the final day. Some of the strokes that he executed off Steyn were stunning to say the least and since the heydays of Aravinda de Silva, you had rarely seen a batsman treating one of world’s top fast bowlers with disdain. This was quality batting.

Dimuth Karunaratne’s leadership has been remarkable as he has kept the players relaxed not imposing hard and fast rules on them. The respect that Head Coach Chandika Hathurusingha has earned among his players has been much talked about but little attention has been given to his inputs during both games.

Despite a couple of dropped catches, fielding overall looked to have improved as well and Fielding Coach Steve Rixon needs to be given credit for raising the standards.

If lot of people thought that Durban’s one wicket win was a fluke, all doubts have been put to rest in Port Elizabeth where Sri Lanka triumphed by eight wickets. That was a comprehensive win. This has been unbelievable two weeks.