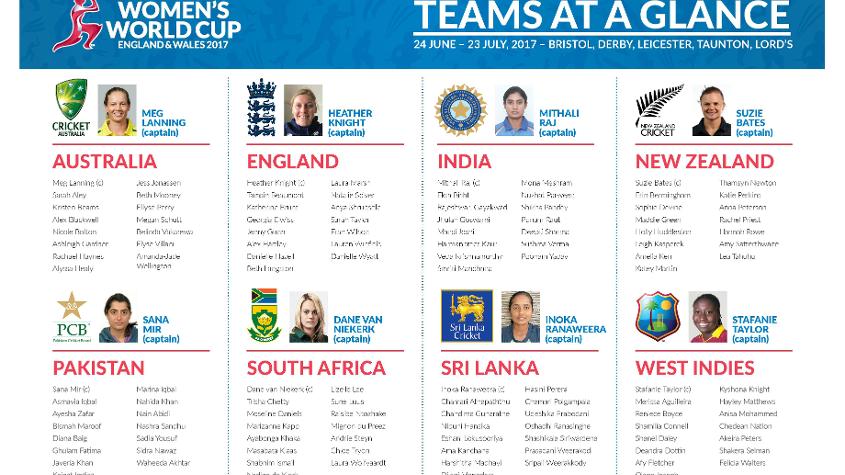 The International Cricket Council (ICC) today confirmed the squads which will be taking part in the ICC Women’s World Cup 2017 to be staged in the United Kingdom from 24 June – 23 July.

Australia captain Meg Lanning will lead her side in its quest to win the ICC Women’s World Cup for a seventh time. Australia is the defending champion and will begin its defence against the West Indies – the side it beat by 114 runs at the 2013 final in India.

Alongside Lanning in the squad is experienced campaigner Ellyse Perry, who will add experience in both the batting and bowling departments. The squad also includes pace bowlers Belinda Vakarewa, 19, and Sarah Aley, 32, who are both uncapped and could make their One-Day International debuts during the tournament.

Australia’s national selector Shawn Flegler said: “This is going to be one of the most tightly contested World Cups in recent times and we have chosen 15 players who we believe are capable of leading Australia to victory.

“There’s some great depth in the squad with the more experienced players complemented by a number of new faces who have shown they can hold their own at this level.

Australia, which is the top-ranked side in the MRF Tyres ICC Women’s Team Rankings, retains eight of the squad that was named for the last edition which Australia won, namely: captain Meg Lanning, Alex Blackwell, Rachael Haynes, Alyssa Healy, Ellyse Perry, Megan Schutt, Elyse Villani as well as Jess Jonassen who was named in the 2013 squad but withdrew due to a knee injury.

England captain Heather Knight said: “It’s such a dream to captain England in a World Cup on home soil; it’s not something that many cricketers can say they’ve done and it’s a real honour. There’s so much potential in this group of players and the opportunity ahead of us is really exciting.

“I’m very proud of all the girls in this squad, as cricketers and people. We’re a young group but we’ve made massive strides over the past 12 months and everyone has worked so hard. We know it’s going to be a tough tournament – and we won’t go in as favourites – but backed by home support we’ll do our best to challenge for the trophy.”

India captain Mithali Raj leads her side in a second successive World Cup. Opening batter Smriti Mandhana has been named in the squad despite not playing a competitive game since January after she sustained a knee injury during the Women’s Big Bash League while the likes of Harmanpreet Kaur, Mona Meshram, Punam Raut, Jhulan Goswami and Ekta Bisht will give Mithali confidence.

New Zealand captain Suzie Bates (98 caps) and fellow batter Amy Satterthwaite (95) can both make their 100th ODI appearance at the ICC Women’s World Cup. Both played at the 2013 World Cup in India along with Sophie Devine, Katie Perkins, and Lea Tahuhu. The 16-year-old bowler Amelia Kerr will play in her first ICC Women’s World Cup.

New Zealand captain Suzie Bates said: “It’s going to be the most competitive World Cup ever. We know we’ll have to be on the ball from game one if we want to earn the right to contest the finals and maybe get to that big final game at the Home of Cricket.

“It’s a hugely exciting time for women’s cricket at the moment and we know we enter the tournament with plenty expected of the White Ferns – and that’s great.”

Pakistan has not been afraid to make changes and has got a new coach for the tournament, with Sabih Azhar replacing Kabir Khan. The Sana Mir-led side will be hoping that the experience of the likes of Bismah Maroof and Javeria Khan will hold the team in good stead.