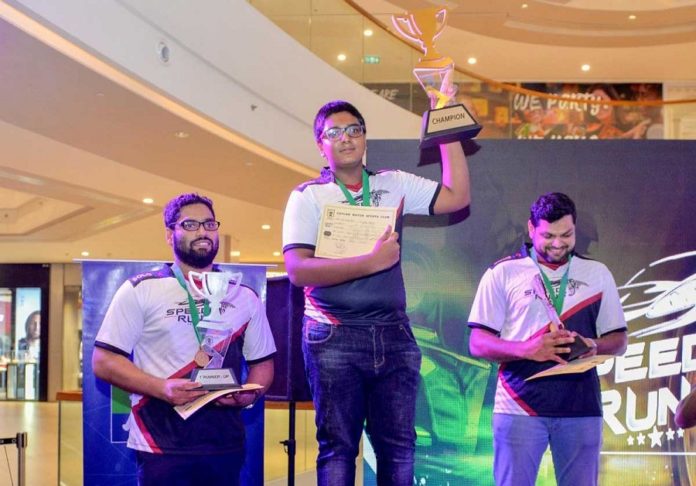 As high-intensity esports tournaments rise in popularity around the world, Sri Lanka is steadily making its mark in the world of esports as well. Speed Runs, Sri Lanka’s first ever online esports championship, kicked off earlier this year.

The tournament is sponsored by HNB Solo and organized by Mandarin Reid (Pvt) Ltd in conjunction with the Ceylon Motor Sports Club. Mandarin Reid (Pvt) Ltd is effectively placing Sri Lanka on the global stage in the esports arena and providing a unique platform for esports in the country with the establishment of Speed Runs, a tournament which has provided a unique opportunity for gamers not only in Colombo, but island-wide.

Round 1 was held in Matara and Round 2 of the highly anticipated tournament was held on the 8th of March at the One Galle Face in the heart of Colombo. Huzeifa Jafferjee emerged as the winner while Chamod Samarakoon emerged as the runner up of Round 2, where competitors took part in Digital Racing. Players used specially designed play-seats to play a Grand Tourismo game on the PS4 platform. Each play-seat consisted of a racing set, pedals, and a force feedback steering wheel, along with its own TV screen and headsets, where players fully immersed themselves in the virtual experience.

Titled ‘The Ultimate Driving Simulation Challenge’, the finals of Speed Runs took place on the 5th of September 2020 at the One Galle Face Mall, Atrium. The high-intensity tournament was held from 9am to 5pm, attracting esports enthusiasts and viewers from around the country. The day was filled with exciting twists and turns, as both the 3rd round and the finals were held consecutively within the same day. Viren Boteju emerged as the winner of round 3, with Riyaz Hafrath in 2nd place and Aadam Junaid in 3rd place.

As the finals came to an end, Calvin Kingsley emerged as the champion, taking the coveted title home. Viren Boteju secured the place of 1st runner up, whilst Riyaz Hafrath emerged as the 2nd runner up, overall. The talented champion may gain the ultimate opportunity to compete at the World Motor Sports Games of FIA, where the fastest from around the world will compete for the title of Speed Run World Champion 2020. One of the world’s most coveted tournaments, competitors around the world vie for this prized opportunity.

By providing Sri Lanka the first ever opportunity to compete on a global esports platform, Mandarin Reid (Pvt) Ltd is helping Sri Lankan gaming enthusiasts go beyond gaming for mere entertainment purposes, helping establish esports as a serious and respected sport within the island.