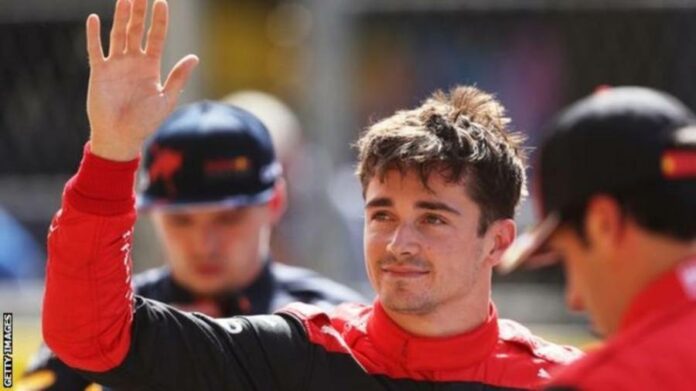 Charles Leclerc withstood enormous pressure after a spin on his first lap in final qualifying to bounce back and take pole at the Spanish Grand Prix.

The world champion was fastest on the first laps but suffered a loss of power on his final lap that meant he was unable to respond to Leclerc’s pace.

George Russell was fourth for Mercedes’ best performance of the season.

Team-mate Lewis Hamilton was sixth fastest, behind Red Bull’s Sergio Perez. Carlos Sainz was third in the second Ferrari at his home race.

Russell was 0.643 seconds off pole position after upgrades for this race moved the team forwards and reduced the aerodynamic bouncing that has plagued them all season.

Mercedes had looked more competitive through the weekend than at any race so far this season, but in the end they were not in the fight at the very front, even if they can be pleased to have beaten one car from the top two teams. 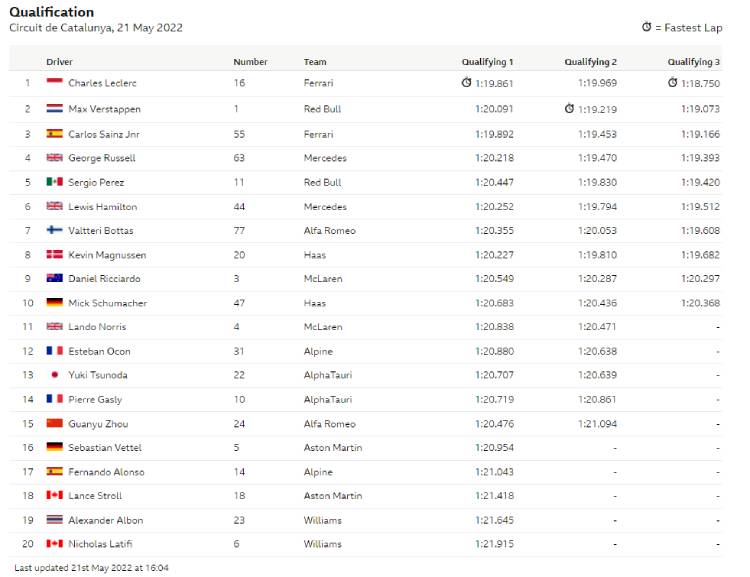 The Ferrari drivers and Verstappen were out of reach, though, and Leclerc underlined his status as the qualifying king of F1 this season with his fourth pole position in six races.

When he spun entering the final chicane on his first run in the top-10 shootout he made life much more difficult for himself than it needed to be – his first lap already looked set to put him at the top of the times.

But if he felt any pressure it did not show in his driving, and his final lap was remarkable.

“I feel good,” said Leclerc, who leads Verstappen by 19 points in the championship. “It was a very, very difficult session, especially in Q3 as I did a mistake in the first run and then I only had one lap.

“It went extremely well. I had a bit of a moment but I made it stick. It was a very good lap and the car was amazing too, so very, very happy.”

Verstappen, winner of the last two races, said he did not know whether he would have been able to beat Leclerc had he not run into problems with his DRS overtaking aid not opening on his final run.

“To be on the front row is a good performance but I would like to have gone for that final lap,” he said, admitting that Red Bull had struggled to find a balance in the car this weekend.

As has been the case for much of the season, the top two were in a league of their own – Sainz was 0.416secs adrift of his team-mate in third place.

Progress from Mercedes – but not enough

Both Mercedes drivers said the team had made a genuine step forward with the floor upgrades introduced this weekend.

“It was the first time all season we were at the top of the timesheets during one of the qualifying sessions,” Russell said.

“We qualified P4, relatively good result. The lap time’s still quite far from Charles, but I feel like it wasn’t very optimised – the tyres didn’t feel in a great window. The lap was fine, nothing special, and that gives me optimism.”

Hamilton said that was “a little disappointed” with his position in the context of Mercedes’ improvement and believed he had lost out because others had gone slower on their preparation laps than is allowed.

“On one side, there is a rule that we have to stick to a delta time. With these tyres, if you do a really slow out lap, you can save a lot of temperature and you gain a lot of time and there were several cars ahead of me who didn’t stick to the delta.

“Perez, for example, was eight seconds slower than the delta time you’re supposed to allow; that’s, like, 5C of temperature and that’s an advantage he carries into the lap.

“I stuck to the delta and also I wasn’t able to do better. The car clearly has better performance.

“George was also slower on the out lap so he probably got a bit of an advantage with that but nonetheless we have done a good job to be where we are. I am just in the same position as always, so that’s a bit frustrating.”

In the end, Alfa Romeo’s Valtteri Bottas won the fight to be best of the rest beyond the top three teams, edging the Haas of Kevin Magnussen by just 0.074secs to take seventh place.

McLaren’s Lando Norris would likely have been in with a shout of taking that spot, but the Briton qualified 11th.

His fastest lap was quick enough to get him into the final stage of qualifying but he had it deleted for exceeding track limits at Turn 12.

Further down the field, it was a disappointing day for the Aston Martin team and national Spanish hero Fernando Alonso.

Aston Martin have a controversial upgrade on their car this weekend. It bears a striking resemblance to the Red Bull, who have accused them of copying their car and raised questions as to whether it has been done legitimately.

Aston Martin had hopes of making it into the top 10, but their pace evaporated and both Sebastian Vettel and Lance Stroll were knocked out in the first session and ended up 16th and 18th.

Alonso, meanwhile, had the pace in his Alpine to make it into the second part of qualifying but he went out late for his final run in the first session and became tangled in traffic towards the end of his build-up lap, forcing him to abort his final attempt.

As others improved, Alonso slipped back to 17th.

“A little bit of misunderstanding between the team and myself,” Alonso said. “I started the lap just behind Lando thinking that I had, like, one or two seconds’ margin with the red light but it was like 20 seconds’ margin.

“If I knew that in advance, I could create a little more margin with Lando and do my own lap. High price to pay because in Barcelona when you start at the back it will be more difficult tomorrow.

“We lost a little bit of pace since yesterday. I think P12/P13 was our real position today.”