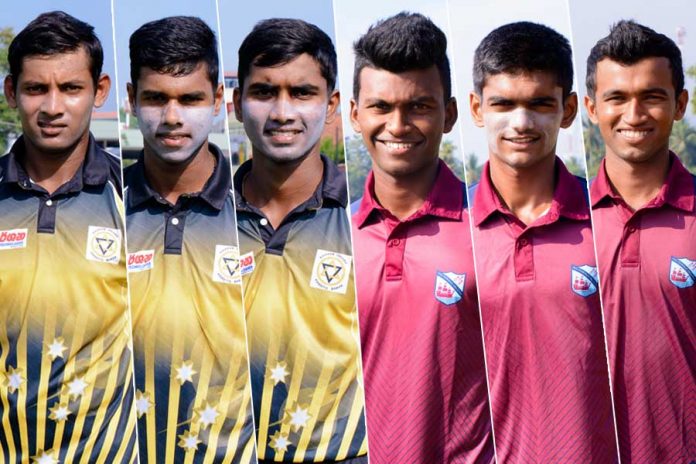 Two of the oldest schools in Sri Lanka, Richmond College and Mahinda College, will set out for 114th edition of their annual battle on the 15th and 16th of March at the Galle International Stadium.

One of the few century-old encounters, The Lovers’ Quarrel was first played in 1905. In the 113 battles since then, both the teams have won 23 matches each.

This year the Richmond pack will be led by the 3rd year coloursman, Thaveesha Abishek and Mahinda College will march under Vinura Dulsara, who is also a 3rd year coloursman. The Richmond-Mahinda encounter always gets exciting with the involvement of youth national players with the latest ODI cap for Sri Lanka, Kamindu Mendis, lead Richmond last year.

Players like Navod Paranavithana, Nipun Malinga, Sandun Mendis, Thaveesha Abishek and Dilum Sudeera will all walk into the Galle International Stadium on the match-day as national coloursmen.

Richmond College recently ended their run in the two-day tourney after suffering a defeat at the hands of Prince of Wales College in the play-offs round. They were rather unlucky to finish 3rd in the group with weather being the major culprit for the set back. They recorded one outright win and six first-innings wins this season with just one first-innings loss against them in their 8 tournament games.

Mahinda College is on a successful run so far in the tourney, having advanced to the quarter-finals of the tournament. They finished second in the group with two outright wins, three first-innings wins, an outright defeat and two first-innings losses. The Mahindians defeated the Peterites in the play-offs and will face the Thomians in the quarters.

Skipper Abishek will play a pivotal role in the Richmond contingent. The classic right-hander doesn’t just add stability up the order, he also brings in the experience of working under his previous captains and senior players like Charith Asalanka, Wanidu Hasaranga and Kamindu Mendis. His copybook strokeplay is a treat to watch.

Abishek’s deputy, Adithya Siriwardena is the go-to man for Abishek with the bat. The tall lanky right-handed opener is the anchor of the batting for Richmond College. Siriwardena has struck 619 runs this season while he is also handy with his off spin.

The trump card of Richmond College will be the last year’s ‘Man of the Match’ Dilum Sudeera who has raised his game high up a level from where he was last year. The left-arm orthodox bowler can turn the ball prodigiously and is also accurate.

Left-arm seamer Amshi de Silva is a deadly customer with his tight line and length and troublesome swing. He will lead the pace attack for Richmond while the Richmondites will mostly rely on spin with the national cap, Sandun Mendis and youngster Sugeeth Nimnada in the attack. Off-spinner Mendis will mix it up beautifully while Nimnada will stick to his line and length 9 times out of 10.

With all the youth national experience, it is an easy guess to name Navod Paranavithana as the key player of this Mahinda outfit. Paranavithana is an elegant left-handed opening bat. With him at the top and skipper, Vinura Dulsara at number 3, it is a killer top-order for Mahinda College. Hansika Welihinda has also been a consistent performer with the bat this season for Mahinda College. Welihinda is the senior-most campaigner of the lot and has scored over 900 runs this season. The batting unit will be headed by these three undoubtedly.

Left-arm spinner Pasan Pethangoda is the spearhead of the Mahinda bowling. Pethangoda has picked up 45 wickets this season and is in fine form.

The speedster of the squad, another youth national cap, Nipun Malinga will be a very exciting talent to look out for in the Lovers’ Quarrel. With over 400 runs and 25 wickets in the schools season despite his national duties, Malinga is a gutsy all-rounder who can turn games upside down.

Going by the performances of these two teams this season, Mahinda College has been the batting heavy team, managing to put up big totals in the tournament. But in games where the bowling has had some work to do, Pethangoda has impressed. On the other hand, Richmond College has relied a lot on its bowling. They do have a strong batting line-up but the bowling is their main weapon.

Given the behaviour of the Galle wicket, a good first-innings score will be a must if you are to win the game. At the same time, Dilum Sudeera and Sandun Mendis will be a handful on such a surface. One should not forget Pethangoda also when it comes to spin.

All the action of the game will be brought to you live by ThePapare.com, Dialog TV channel no. 71 and My TV.

ThePapare.com will also be bringing to you the ball-by-ball updates, reports, photos and videos of the 114th Lovers’ Quarrel. Stay logged on!