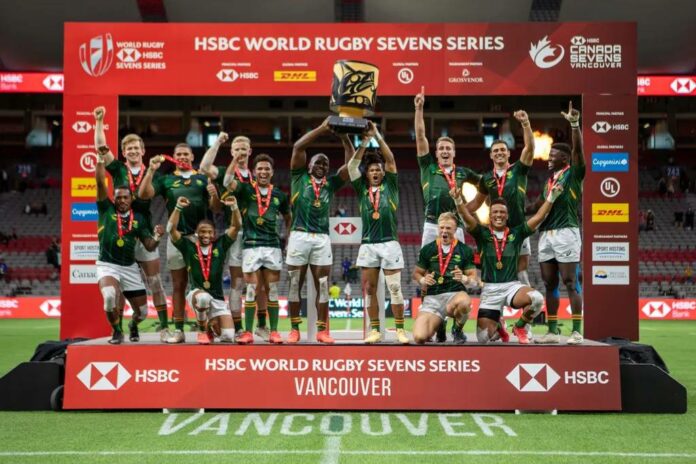 South Africa’s love affair with Vancouver continued as they followed up their 2019 tournament win there with another title.

With a strong contingent of Olympians in their squad, the Blitzboks went into the opening round of the HSBC Canada Sevens at BC Place as one of the favourites to lift the trophy and they lived up to their star billing with some scintillating rugby throughout, capped by a record 38-5 win over Kenya in the final.

It was the most points scored by any team in a Series Cup final in Canada and included six tries to take their overall tally to 38 for the tournament – again, a new high. Try poacher extraordinaire, Angelo Davids, was responsible for 10 of them, becoming the first player to hit double figures for a single tournament in Canada and the first to score 10 tries in a Series event since France’s Terry Bouhraoua at Cape Town in 2017.

The first all-African Cup final since Adelaide in 2008, and only the second in series history, began with Kenya failing to deal with the kick-off and good field position for South African to work Davids into space for the first of his two tries on the night. Continuing to be dogged by handling errors, Kenya struggled to get into the game and Davids doubled his tally when he intercepted a pass 20 metres out.

A trademark powerful run by Alvin Otieno temporarily lifted the Shujaa but the Blitzboks remained in control of possession and added further tries through Sakoyisa Makata and Christie Grobbelaar to claim a 24-0 half-time lead.

Another turnover at the start of the second period proved costly for Kenya as Ronald Brown capitalised to score his sixth try of the tournament, one fewer than Otieno who had a big hand in Kenya’s only try of the final when he attracted the attention of three defenders to open up space for Daniel Taabu to cross. Fittingly though, it was South Africa who had the final word when Darren Adonis touched down late on.

“I am really proud of the boys. After a disappointing Olympic campaign, coming here we really tried to lick our wounds and put up a fight. I am so grateful we could come up with the victory. Hopefully, all Africans were proud today,” said Blitzboks captain Siviwe Soyizwapi.

Always keep your head up and your eyes open 👀

Great Britain claimed the bronze medal on their Series debut after a 24-14 win against Ireland. The teams had drawn 7-7 in the pool stages but the result of the rematch was never really in doubt after Great Britain raced into a 17-0 lead thanks to tries from Frederick Roddick, Calum Randle and the all-action Paddy Kelly.

Ireland went into the third-place decider missing three of their key players – Mark Roche, Bryan Mollen and Ed Kelly – through injury, but they fought back to score through Liam Turner on the stroke of half-time.

Defending a 17-7 lead, Great Britain managed the game clock effectively while Robbie Fergusson was in the sin-bin for a deliberate knock-on, keeping Ireland at bay during those two minutes. Randle then crossed for a second time before Ireland signed off with a try for Sean Kearns.

For a while, Great Britain would have had designs on gold in Vancouver after they responded to an early Davids try in the semi-final against South Africa with two of their own in quick succession, from Alex Davis and Jamie Farndale, to go 12-7 up.

Dewald Human had been sent to the sin-bin for lifting in the tackle, but once the Blitzboks were back to their full quota of players, the momentum shifted back to them again.

With threats all over the pitch, South Africa had no need to panic and Christie Grobbelaar got them back in it before Zain Davids’ quickfire double saw them pull away to win 26-12.

Kenya cruised through to their sixth Cup final and their second in Vancouver, having finished runners-up to Fiji in 2018, with a convincing 38-5 victory over Ireland.

The warning signs were there for Ireland just 19 seconds in when Willy Ambaka burst through the middle to score under the posts. The rampaging Otieno, the man they call “The Water Buffalo”, helped himself to a hat-trick of tries thereafter, while Daniel Taabu, Levy Amunga and Mark Kwemoi also got on the scoresheet.

Earlier in the quarter-finals, Ireland needed Ben Moxham’s try in sudden-death extra-time to overcome a battling Hong Kong and reach the last four for only the second time in Series history.

The second quarter-final between USA took on Kenya promised much from an attacking point of view, and it delivered. USA twice took the lead but Otieno produced another headline-grabbing performance with two tries as the Shujaa made it through to their first World Series semi-final since Hong Kong in 2018.

Meanwhile, South Africa conceded first against Spain but responded in emphatic style to register their second-biggest Cup quarter-final win. Angelo Davids followed up his four-timer against Mexico on day one with a hat-trick to go top of the tournament’s try-scoring charts. Shaun Williams contributed a brace and the rest of the tries in the 54-5 win came from Brown, Human and JC Pretorius, who brought up the Blitzboks’ half-century in the last play of the game.

In the play-offs to decide finishing positions outside of the top four, there was disappointment for the locals in the fifth-place decider as Canada lost to rivals USA for the second time in the tournament. Canada led 7-5 at the break after Jack Carson’s try was expertly converted by Brenning Prevost from wide out. But Matai Leuta scored twice and Joe Schroeder added another as the USA reeled off 21 unanswered points in the second half to win 26-7

Hong Kong’s first series tournament outside of Asia in 14 years ended with a deserved seventh-place finish. Hugo Stiles, Jamie Hood and Max Denmark put them 19-0 up in a dominant first half against injury-hit Spain, who were unable to hit the same heights as last year in Vancouver when they finished sixth. Pol Pla’s converted try at the start of the second half gave Los Leones a glimmer of hope but they failed to trouble the scorers again despite playing the last two minutes against six men following a yellow card to Hood.

Germany finished the tournament strongly with three consecutive victories, improving their record winning margin in each as they finished ninth. Having rounded off day one by beating Chile 36-12, Damian McGrath’s side began Sunday with a 41-0 win over Mexico before bettering that result again against Jamaica.

Jamaica had won their first-ever series match with a 10-5 sudden-death extra-time victory against Chile in the ninth-place semi-finals, but the Waisale Serevi-coached Crocs were no match for the Germans who ran out 66-0 winners. John Dawe signed off an impressive tournament with a hat-trick as Jamaica ended the game with six men following Fabion Turner’s dismissal for a second yellow.

A VERY popular try for the home crowd as Olivia Apps races over for @RugbyCanada #HSBC7s pic.twitter.com/sBQOtyiQDB

Jasmine Joyce cemented her reputation as a sensational finisher and a player for the big occasion with a hat-trick of tries and a player of the match award in a free-flowing Fast Four final against USA.

While Joyce’s first try after just 30 seconds was all about pace, her second a minute later was down to bewitching footwork that left two defenders bamboozled.

USA gamely stuck to their task and threatened a comeback following tries from Summer Harris-Jones and Jaz Gray which brought the score back to 14-12.

But after playing a part in the build-up to Emma Uren’s try, Joyce struck again with a straightforward run-in. By now the commentators were running out of superlatives for the two-time Olympian who had come off the bench to score with her first touch in Great Britain’s 43-0 semi-final win against Mexico.

Teenager Grace Crompton scored twice in that match and added another in the final as the match began to run away from a USA side that lost to Great Britain in the Tokyo Olympics quarter-finals. Crompton’s score also saw her draw level with team-mate Joyce and USA’s Gray on six tries at the top of the Fast Four try-scorer chart.

There was still time for Amy Wilson Hardy to rub further salt in the wounds as she rounded off the scoring with Great Britain’s sixth try in a 34-12 victory.

Still beaming from the experience, Joyce said: “It was so fun to be out there. Coming back here and playing sevens was phenomenal. The crowd was absolutely fantastic.”

Having been beaten 29-12 by USA for the second day in a row, crowd favourites Canada found themselves in the third-place decider against Mexico.

Canada had defeated Las Serpenties 39-0 in the first meeting between the teams on day one and they started brilliantly in their bid to better that scoreline with Emma Chown scoring straight from the kick-off.

Mexico remained on the back foot and Canada ran in seven more tries, Alysha Corrigan matching her double from the previous day with another brace. Sabrina Poulin also crossed twice in addition to tries from captain Olivia Apps, Nakisa Levale and Chloe Daniels, who converted her own try for a final scoreline of 48-0.