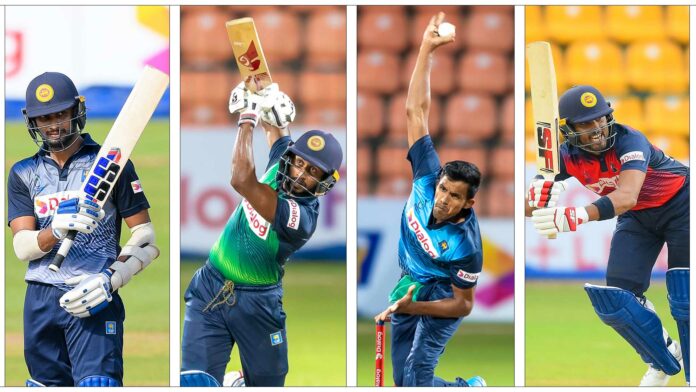 Sri Lanka Cricket have selected a 30-man squad to take on the touring South Africans in 3 ODIs and 3 T20Is in September, according to the Sunday Times.

Dinesh Chandimal is a name that has drawn some attention, as the righthander has largely been considered a Test player in the recent past. However, the former national skipper has done well in the ongoing Dialog-SLC Invitational T20 competition, which was organized as more or less a selection tournament for the limited overs series against the Proteas as well as the T20 World Cup. Chandimal last played for Sri Lanka against the West Indies back in March 2021.

Mendis, who caught the eye of the cricketing world due to his ability to bowl with both arms, has shown his capabilities with the bat in the recent past, smashing 3 consecutive half centuries for SLC Greens in the ongoing invitational T20 tournament. The left-hander made his international debut in 2018, however, hasn’t been given too many opportunities, having played just 7 internationals thus far, with little success.

Madushanka has a reputation for being a big-hitting all-rounder and showed his prowess with the bat for the SLC Greys, smashing 74 off 39 deliveries against the SLC Blues, before being rested due to a niggle. He made his debut for Sri Lanka in 2017 but has not played since 2019.

Among the uncapped players picked are Maheesh Theekshana, Pulina Tharanga, Sahan Arachchige and Dilshan Madushanka. All 4 have had decent runs at the ongoing Invitation T20 competition, while also impressing during the inaugural Lanka Premier League last year.

Kusal Perera, who is currently recovering from Covid-19, has also been named in the squad and is expected to be available for the series which is set to begin on the 2nd of September.

Dasun Shanaka has, as expected, retained his Captaincy.

Senior players Angelo Mathews, Dimuth Karunaratne and Suranga Lakmal are not among the 30 players named in the squad.

The 30-man squad is expected to be trimmed down to 20-22 players ahead of the series, but it is expected that they will train together in a bubble leading up to the T20 World Cup set to commence on October 17th.