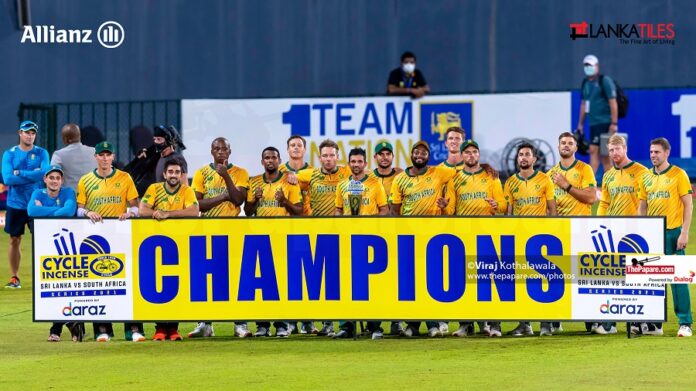 Another batting debacle by the hosts proved too costly, as Quinton De Kock and Reeza Hendricks hit half-centuries to chase down a below-par 120 runs without any hassle. For the first-time in history, Sri Lanka were handed a 3-0 drubbing in T20I Cricket at home; a proper hiding for Dasun Shanaka and team.

After opting to bat first on a fresh surface, Sri Lanka had no momentum whatsoever in their innings, as they were restricted to 120 for 8. They once again had 49 dot balls throughout their innings.

Kusal Perera made 39 at the top of the order, while Chamika Karunaratne scored crucial 24 runs towards the end. Perera, however, did not take the field to keep wickets, as he struggled with post COVID-19 breathing problems.

Avishka Fernando was the first to be dismissed for Sri Lanka, unfortunately being caught and bowled by Kagiso Rabada while attempting to dig out a yorker. Dhananjaya De Silva, despite being promoted to number three, failed to make an impression yet again.

Rabada roughed up Bhanuka Rajapaksa with a deadly bouncer, followed up with a seam-up as the left-hander was castled for 5. All this happened inside the powerplay, while Kusal Perera fought his way through as Sri Lanka notched up 47 runs for the loss of 3 wickets inside the field restrictions. Perera top-scored with a 33-ball 39, which included 3 fours.

Kamindu Mendis, even gave a wicket to part-time spinner Aiden Markram as Sri Lanka sank further, losing wickets at regular intervals. Wanindu Hasaranga once again failed as a batsman when he came down the track, chipped straight to extra-cover off Fortuin.

Skipper Dasun Shanaka did not get any rhythm during his knock of 18, which came in 26 balls as the hosts were 8 down for 101. Sri Lanka’s first six in the innings came in the penultimate over courtesy Chamika Karunaratne. He finished off the innings, with another six off Shamsi, to remain unbeaten on 24 off 19.