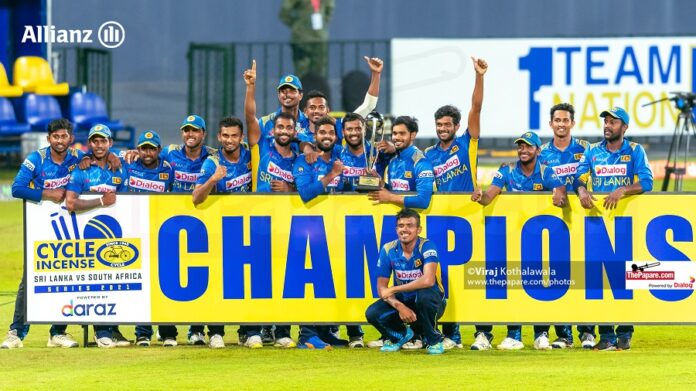 After the South African spinners restricted Sri Lanka to 203 for 9, the hosts put up a clinical effort to rattle the Proteas to 116 with mystery spinner, Maheesh Theekshana returning figures of 4 for 28 on debut.

Earlier, the South African spin quartet of Keshav Maharaj, George Linde, Tabraiz Shamsi and Aiden Markram shared 8 wickets for 142 runs on a slow, wearing surface. Sri Lanka failed to put up at least one 40+ stand in their innings with Charith Asalanka top-scoring with 47.

The visitors gave one new ball to the spinners to start off the game. Skipper Keshav Maharaj trapped Avishka Fernando on the crease with an arm ball as the hosts lost their first wicket on 22.

Dinesh Chandimal, playing his 150th ODI, missed a George Linde delivery on 9 while attempting a sweep as the spinners got on the job perfectly removing both openers cheaply.

One drop batsman Kamindu Mendis and Dhananjaya De Silva, at number 4, added 31 runs for the 3rd wicket. However, against the run of play, Mendis chipped one back to the bowler as tall left-arm spinner, Linde dived to his left to hold onto a good return catch.

De Silva was undone by some spin and bounce as part-time off-spinner Markram got the 4th wicket of the innings. Wicket-keeper Heinrich Klassen anticipated the deflection off the pad to dive onto the pitch to complete the catch. De Silva made 31 off 44 balls with 2 fours as Sri Lanka were 93 for 4 before the 20-over mark.

Dasun Shanaka’s horror run with the bat continued as he played an irresponsible slog-sweep off Keshav Maharaj to throw away his wicket as Sri Lanka were 5 down for 112.

Wanindu Hasaranga, too threw away his wicket when Sri Lanka needed an able partner to support Asalanka. Hasaranga’s mediocre performances with the bat in the recent past continued to give worries for the Lankan think-tank as he holed out to deep long-off as Maharaj picked up his third wicket of the match.

After being 121 for 6, Asalanka and Chamika Karunaratne, the last recognized pair, added 33 runs, the highest partnership of the innings, before Shamsi trapped the latter plumb in front for 16.

Asalanka, who made two half-centuries in the previous two games, played another vital knock – 47 off 71 balls with 2 fours. However, he was the 8th batsman to fall as he was caught behind off Shamsi when the score was 166.

Dushmantha Chameera and debutant Maheesh Theekshana added 32 precious runs for the 9th wicket to take Sri Lanka over the 200-run mark. Chameera made his highest score in ODIs, 29 off 39 balls with 3 fours.

Sri Lanka’s defense of 203 began in the possible fashion when Praveen Jayawickrama induced an outside edge of Aiden Markram in the 2nd over, caught neatly by Dhananjaya De Silva at first slip.

On a pitch which had plenty for the spinners, fast-bowler Dushmantha Chameera produced the delivery of the day when he castled Reeza Hendricks with a perfect ball which went through the bat and pad gap and hit top of the off-stump.

The Proteas were 19 for 3 when Kamindu Mendis, dived to his left and hang onto a brilliant catch as Chameera picked up 2nd wicket as Rassie Van Der Dussen was dismissed for 5.

Introduction of the debutant, Maheesh Theekshan brought immediate success for the hosts dismissing the centurion from the previous match, Jaaneman Malan, who edged to first slip after scoring only 18 runs. Theekshana became the fourth Sri Lankan to take a wicket off the first ball in ODIs.

After a brief interruption, play resumed at 8.00pm. Sri Lanka struck through Wanindu Hasaranga who castled Wiaan Mulder for 02

Theekshana got his second wicket when he trapped Heinrich Klassen with another carrom ball as the Proteas were 6 down 54. Andile Phehlukwayo and George Linde added 36 runs for the 7th wicket but Charith Asalanka broke the stand to break any hopes for the visitors as the former was caught behind for 16.

Video – Playing Chandimal is a possibility, Akila is trying too many things – Arthur | SLvSA – 3rd ODI

Theekshana and Hasaranga cleaned up the tail without much hassle despite the late order avoiding the lowest ODI score for South Africa against Sri Lanka.

With this win, Sri Lanka jumped to the fifth position in the ICC Cricket World Cup Super League points table. The islanders have accumulated 42 points with 4 wins in 15 games.

The three-match T20I series will commence on the 10th of September at the same venue.