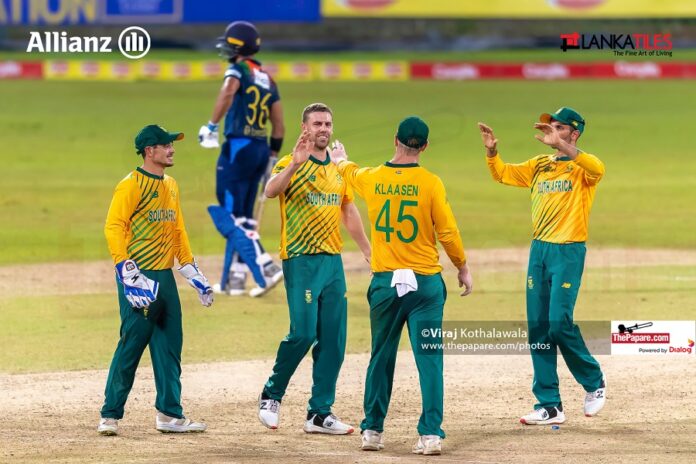 After opting to bat, South Africa put up a decent effort with the bat to reach 163 for 5. The Proteas bowlers were disciplined enough to restrict Sri Lanka to 135/6 despite Dinesh Chandimal’s career-best score of 66. He batted through the innings scoring 66 off 54 balls with 5 fours and 2 sixes.

Chasing 164 runs to win, Sri Lanka found no momentum in their run chase as the Proteas tightened the screws from the onset. The hosts had 17 dot balls in their powerplay as they scored only 34 runs for the loss of Avishka Fernando, who was run-out courtesy Anrich Nortje direct-hit.

Bhanuka Rajapaksa collected his third consecutive duck, as Keshav Maharaj, playing his first T20I, trapped the left-hander in front of the stumps. From 34 for no loss, the hosts were quickly 2 down for 34.

Chandimal held the innings together to keep the scoreboard moving, while Charith Asalanka struggled even though he was promoted to number four, scoring only 6 off 19 deliveries.

Despite struggling in the powerplay, Chandimal reached his 6th half-century in 40 balls. Soon after, Skipper Dasun Shanaka was castled by Bjorn Fortuin as the hosts were 4 down for 95 runs in 15 overs.

With 69 runs to get in the final 5 overs, Sri Lanka lost Wanindu Hasaranga and Dhananjaya De Silva quickly as they perished in their quest of quick runs.

Chamika Karunaratne was able to score some big strokes in the dying stages of the match but it was a little too late for the hosts.

Earlier, Quinton De Kock and Reeza Hendricks got South Africa off to a flier. They used the field restrictions quite well to collect the boundaries. Hendricks put off the debutant Mahesh Theekshana with 3 fours in his over which went for 14 runs, as the Proteas picked up momentum.

After adding 73 runs for the first wicket, De Kock holed out at deep mid-wicket off Hasaranga for a 32-ball 36. Six runs later, Hasaranga picked up his 2nd scalp as Hendricks top-edged to short fine-leg. He struck 38 off 30 deliveries with 3 fours and a six.

Theekshana, despite going for some runs, redeemed himself by trapping Heinrich Klassen for 2 as the visitors were 3 down for 87 at the end of the 13th over. The 21-year old ended his spell of 4 overs for 35 runs, while Hasaranga was the pick of the bowlers, taking 2 wickets for 23 runs in his quota of overs.

David Miller and Aiden Markram started off by negating the spin quite well. However, they slowly raised the scoring-rate by finding the boundary at will. They added 65 runs off 41 balls for the 4th wicket.

Markram played an impressive knock – 48 off 33 deliveries with 2 sixes and 1 four. Markram fell off Skipper Shanaka’s bowling in the penultimate over.

Miller struck a quick-fire 26 off 15 balls before falling to the bowling of Dushmantha Chameera in the final over, as Sri Lanka conceded only 16 runs in the last 2 overs.

The second T20I match in the three-match series will be played on 12th September, at the same venue.